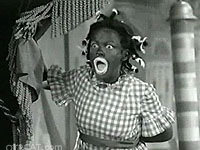 As the controversy of black representation on old time radio shows and television stirred as early as 1930, there were many blackface performances on film through the 1930s and into the 1940s.   Performing in blackface continued to be normalized, many well-known entertainers of stage and screen also performed in blackface including:

** It should be noted that Al Jolson was a staunch Civil Rights activist
and helped open opportunities for African-Americans on Broadway.