Enjoy One of the Great Talents of Jazz Piano who made a Name for Himself in the Early Days of Radio, Fats Waller.

Choose your CD format
or order disks individually: Add to Cart Add to wishlist
Play a sample episode from July 06, 1938:

For much of the 19th century, the Harlem area of Manhattan Island was synonymous with elegant living. The old Dutch settlement had been the home of wealthy land owners and farmers, but eventually the soil became depleted, and squatters began to settle in the area. By the 1880s the area began to attract African Americans in ever greater numbers. 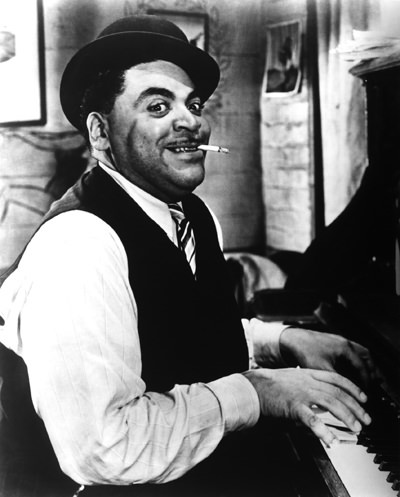 Edward and Adeline Waller had come up from Virginia to seek their fortune around 1888, settled in Harlem by 1902, and on May 21, 1904, their youngest son Thomas was born. By the time he was 5 or 6, chubby young Thomas began playing the harmonium to accompany his father's street corner preaching.

During his teen years, Thomas, who had picked up the nick name "Fats", began to expand his musical education, studying pipe organ and befriending one of the foremost practitioners of "stride piano", James P. Johnson. "Stride" was a style of jazz piano which combined elements of March and ragtime, emphasizing strong rhythms and improvisation.

Fats developed his showmanship and an element of comic fun while playing organ at Harlem's Lincoln Theater as well as appearing at numerous Rent Parties. Rent Parties were the practice of tenants hiring a band or musician to entertain at a social gathering. As the party began to swing, a hat would be passed and the proceeds would pay the rent.

Fats' career started to take off in 1929, when he began recording at the newly refurbished Victor Studios in Camden, NJ. This is also the year he composed some of his most memorable tunes, including "Ain't Misbehavin'", "I've Got A Feeling I'm Falling", "Honeysuckle Rose" and many others. He began to play on the radio over WABC during 1930-31. The need to "keep something going" between numbers on the radio further developed his talent for comic patter. He had his own show from 1932-34 on WLW, Cincinnati, "Fats Waller's Rhythm Club", and received an exclusive contract from Victor in 1934.

Although he was given mostly tin-pan alley tunes of questionable merit to record, he was usually able to make the most of them with his humour and tremendous jazz talents. Fame from his Victor association lead to greater opportunity and demands. In 1935 he travelled to Hollywood to perform in movies and began touring the US and Europe.

Fats took notice of differences in his audiences. In the US, white audiences would usually see him in clubs, and could listen or dance as they chose. Black audiences saw a Fats Waller performance as a chance to dance, whereas the British and European audiences treated his appearances as concerts.

In 1943 Fats filmed Stormy Weather as well as touring at a hectic pace. His system had been heavily taxed by overindulgence in food and drink, as well as the demands of travel and performing. In October he returned to Hollywood for an engagement at the Zanzibar Room. He became ill during the gig, but attempted to maintain his performance schedule. As his pneumonia worsened, he boarded the Santa Fe Chief for NY. As the train approached Kansas City, MO, Fats Waller passed away during the night of Dec 14-15, 1943. Word of his passing swept through the KC Station, and onto another train in the station. On the west bound train was Louis Armstrong, who is said to have cried for hours when he received the news.

Fats Waller's funeral in Harlem was attended by more than 4200 people. In his eulogy, the Reverend remarked: "Fats Waller always played to a packed house."