Famed African-American contralto, conductor Arturo Toscanini said she had a voice "heard once in a hundred years."

Born February 27, 1897, Marian Anderson was an American contralto.  Being African-American, she faced many color barriers during her career but famed conductor Arturo Toscanini said she had a voice "heard once in a hundred years." 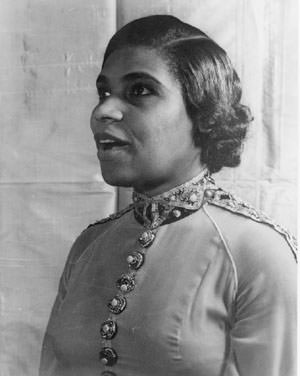 In 1939, the Daughters of the American Revolution (DAR) refused permission for Marian Anderson to perform in Constitution Hall due to her race. As a result thousands of DAR members resigned, including First Lady Eleanor Roosevelt.  The First Lady helped to arrange an open-air concert at the Lincoln memorial on Easter Sunday 1939.  It was one of the greatest cultural moments in the 20th century with over 75,000 in attendance Marian Anderson sang:

My country tis of thee,
Sweet land of liberty,
Of thee I sing.
Land where my fathers died!
Land of the Pilgrim's pride!
From every mountain side,
Let freedom ring!

In 1943, the Daughters of the American Revolution (DAR) recanted and invited Marian Anderson to perform in Constitution Hall.  Her talent and drive opened doors in concert halls across the country.

This collection includes known recordings of Marian Anderson including her performance at the Lincoln memorial, a guest appearance on A New World's a Coming, and additional recordings. See also Freedom's People.