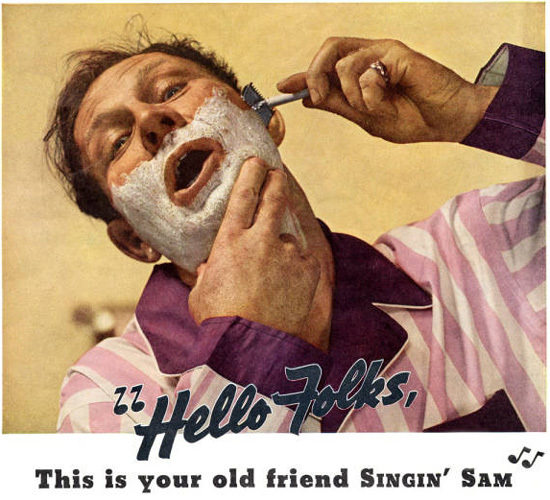 Helen wrote that Harry Frankel was born on January 27, 1888 in Hillsborough, Ohio.  But his earliest memories were of Danville, Kentucky, where his family moved when he was three.  She added: "the South got into his soul and remained there all his life.  Harry had happy memories, always, of his Old Kentucky Home.  It colored his thinking.  It framed his language and his way of talking."

When Harry was nine, his father moved the family and his men's clothing business to Richmond, Indiana.

Young Harry's early training -- as with so many pioneer radio performers -- came via vaudeville, minstrel shows, and singing with silent films.

"Smiles" remembered how Harry sang his way around the country year after year.  "He always sang the songs that everybody loved.  These were the old tunes which were to become his trademark."

One day, Harry met a man who owned the Great Lakes Lawn-Mower Company.  By 1929, Harry was broadcasting on WLW, Cincinnati; he adopted the name "Singin' Sam, the lawnmower man." 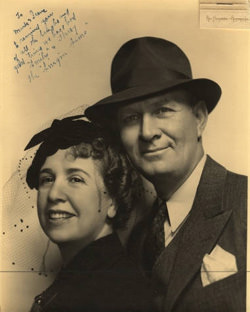 In July of 1931 Harry met an executive with the Barbasol Shaving Cream Company.  Harry was offered a job and moved to New York to broadcast of WABC, the key station for the Columbia Broadcasting System. 'Smiles' wrote that these broadcasts were presented Monday through Friday at 7:15 pm EST.

Living in New York was not Harry's cup of tea.  In 1934, he returned to Richmond, married Helen "Smiles" Davis and the couple took up residence on a five-acre-farm on what is now Route 40, 11 miles west of Richmond.  They named their home "Just-a-Mere" farm.

He also resumed his popular Barbasol broadcasts, originating them from WLW, Cincinnati.  "Smiles" recalled that Harry was with the Barbasol company for 12 years. 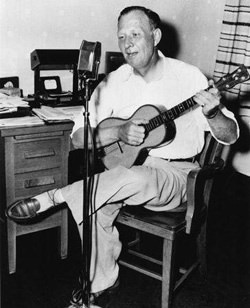 In June 1937, Harry began a series of broadcasts for the Coca Cola Company.  The shows, "Refreshment Time with Singin' Sam," were on 16-inch discs which were syndicated and distributed to radio stations all over the country.  He would fly to New York twice a month and record 10 shows.  Victor Arden was musical director, Del Sharbutt was his announcer.  (My correspondence with Mr. Sharbutt might find its way to this space in the future).  Harry continued to the Coca Cola Shows until 1942.

Returning to Richmond, he would spend his 'time off' with 'Smiles' building a new home closer to town.  They named this home "Trouper Hill." 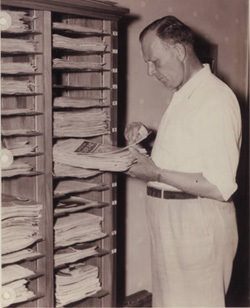 Joining him for those broadcasts were accordionist Charlie Magnante and his sextet; others were Hilda, Kathleen and Mary--The Mullen Sisters.

In 1946, Harry Sold "Trouper Hill" and moved to Sarasota, Florida. In June 1948, Harry and "Smiles" went back to Richmond for the summer, planning on returning to Florida in November. Two weeks later, Harry suffered a fatal heart attack.  The Lawnmower man, the Barbasol Man, the old minstrel show trouper was just 60.

In February of 1951, "Smiles" gave Harry's collection of thousands of pieces of sheet music to Morrisson-Reeves Library Library in Richmond, Indiana. 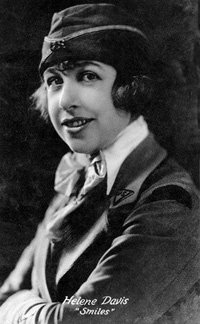 If you'd like to know more about Harry and "Smiles" -- Mr and Mrs Singin' Sam-- contact the Morrisson-Reeves Library .  Many thanks to the library for the use of images on this page. Many of the notes used for this manuscript came from an article which I wrote for the May, 1973 issue for HOBBIES--The Magazine for Collectors, published in Chicago.

Helen "Smiles" Davis, who became Mrs Harry Frankel in 1934 was born Helene.  She had her own interesting career as an entertainer -- going back to World War I.  Soon after the United States declared war on Germany in 1917, General Pershing issued a call for performers to travel to Europe to entertain American troops.  Helene was among those selected to go.  As a dancer and singer, she took with her several current tunes, including one so new that it had not been published.  She took a lead sheet written in pencil with just single notes.  The song, written by Lee Roberts and Will Callahan, was titles "Smiles." She sang it for the troops and for the rest of her life was known as "Smiles."

Reply
Spoiler : Wow! A part of WLW history that I've never come across before. All the Best! DE W8LV BILL

Reply
Spoiler : Mr Frankell along with The Great Kate Smith are two of the most lovely memories I have of Radio days!.

Reply
Spoiler : My daughter and I just closed on his old farm on route 40 today. So excited to know the history about this amazing man and look forward to returning the property to its original condition.