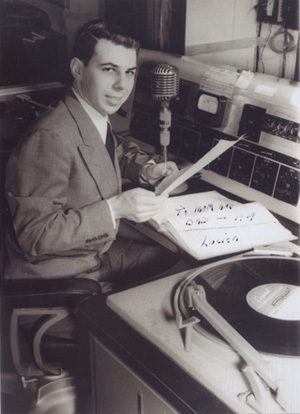 Lou Dumont has been affiliated with radio and television, as announcer-producer, since 1943. He has been heard on radio stations in New Hampshire, Massachusetts, Connecticut and Maine; his television work was in Manchester, NH and Boston, MA. He was also a newspaper reporter/writer in New Hampshire and wrote manuscripts about "old time radio" pioneers from 1973 to 1987 (for HOBBIES--The Magazine for Collectors.)

He spent 15 years in media work at the University of New Hampshire's Keene State College before retiring to Cape Cod where he produced a daily afternoon drive broadcast "The Lou Dumont Radio Program" on Cape Cod's WFCC, Chatham, MA.(1987-1994).

He and his wife, Phyllis, met while working at WCOP (studios in the Copley Plaza Hotel),Boston, MA in the mid-1940s. They were married in 1948 and a year later began a 5-year radio series "The Dumonts and Homemaker Harmonies" at WHEB, Portsmouth, New Hampshire (1949-1954). Phyllis produced "The Fine Art of Collecting" and "Collectible Collectors" (1981-1990).

Their broadcast memories include opening night interviews at the Ogunquit, Maine, summer theatre where they met numerous personalities from the theatre and film (1950-1956.)

Lou is in his 34th year as producer of "Collectible Classics: the Music of America 1920s-1950s." The broadcasts are heard weekly on WZBK, Keene, New Hampshire.