Our OTRCAT personality-spotlight this time looks toward a man who was in the Broadway musical, "The Second Little Show" (at New York’s Royale Theatre) a few months before he turned to radio as a dramatic actor.  He was also a lyricist, working with composers of a number of popular songs in the 1930’s.

In Octorber 2005, while preparing to produce a radio broadcasts known as "Collectible Classics", I came upon a recording made by singer Mildred Bailey.  That disc (a Vocalion) was "Trust in Me."  Its label read: Ned Wever, lyric; Jean Schwartz and Milton Ager, music. 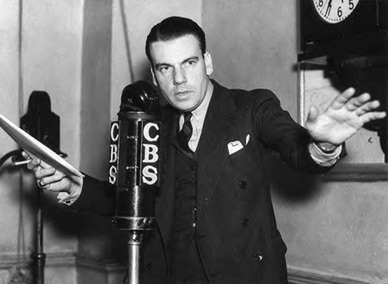 In the 1950s, work found me on the highways of New England; the car radio carrying great daytime dramas known as soap operas.  I’d heard a voice and wanted to know more about the person behind the voice.

The radio fan-magazines of the time contained articles dealing with radio’s top daytime dramas, but I never found them on the newsstand on the street.

Ned Wever was born in New York April 27, 1899.  In his senior year at Princeton University, he wrote the book and lyrics for Princeton’s Triangle Club show.

In September of 1930, he appeared on Broadway in the cast of "The Second Little Show." It was short-lived, running 63 performances.  When it closed, Wever directed his energy to radio, becoming a pioneer on the art of daytime radio drama.

On the wider screen, his roles would include playing judges, police detective, an FBI chief, doctors, and attorney, the owner of a bar, and several productions for Walt Disney Company.

Ned Wever died on May 6th, 1984 at Laguna Hills, California.  His heart has given out.  I will always think not only of his clear radio voice but of his work in composing lyrics to songs such as:

In 1933, Ned Wever became a member of the music licensing firm of The American Society of Composers, Authors and Publishers.  Before moving to the west coast for his work in film/TV, Mr Wever’s home was in Old Greenwich, Connecticut.

Spoiler : You two are the good guys in this business; wish there were more.