Dick Tracy came from the comic strips to the radio in this great serial. He still fights bizarre villains and the 15 minute shows are filled with cliff-hangers. Tune In!

Choose your CD format
or order disks individually: Add to Cart Add to wishlist
Play a sample episode from September 20, 1945:

"Case of a Man Without a Head" 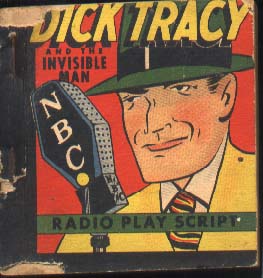 A favorite of radio kids, and many adults as well, Dick Tracy on the radio was a long running serial that was based on the very popular Dick Tracy of newspaper comic strip fame. Dick Tracy was the star of movies and several animation series as well, including a 1970's TV animation adaptation that was as true to the original Chester Gould newspaper comic strip as was the radio version. Dick Tracy had debuted in the Detroit Mirror in 1931. Soon it hit New York and Chicago, in the New York Daily News and the Chicago Tribune. By 1937, the comic strip appeared in over 700 newspapers. With a strong, built-in audience, Dick Tracy was perfect serial.

First developed for radio in 1934 for the New England region, the show was an immediate hit and was then done on from 1935-37. Republic Pictures began the Dick Tracy cliffhangers in the movies, which also helped kids get excited about following his adventures on radio. Fifteen minute serials were produced for a full five nights a week in 1938-'39. In 1939, it went to a half-hour, usually playing on Saturdays. With WWII developing, Dick Tracy was put on hold. After a few years, the show again took to the air, and continued from 1943 through '48, first developed as a fifteen minute serial, and then expanding to a half hour in the mid 1940s. Dick Tracy was featured in a series of novels and "Little Big Books" at the time, as well as the Republic cliffhangers and movies.

Chester Gould's newspaper strip featured singular thugs and inventive plots all drawn in a flat, modern-looking cartoon. The strip was heavy on scientific crime detection, using the lab to sift through clues, and ultra-modern inventive devices such as Dick Tracy's two-way wrist radio (1946) that were wild then, and are very big in commercials right now as pager/cell phones (almost wristwatch size.)

On the radio serial, the "good guys" were Dick Tracy, "protector of law and order," his sidekick Pat Patton, and Tracy's investigative team Junior Tracy and Tess Trueheart. The strip and show also starred bizarre villains, with such names as The Blank, Little Face Finney, Pruneface, The Brow and Shakey. The radio cases were always exciting, with plenty of trouble, cliff hanging and narrow escapes. (Please note these Dick Tracy recordings are of mixed quality with some unfortunate hiss) 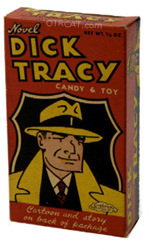 Other shows that were based on popular characters are Sherlock Holmes, Chandu, the Magician, and Nick Carter, Master Detective. 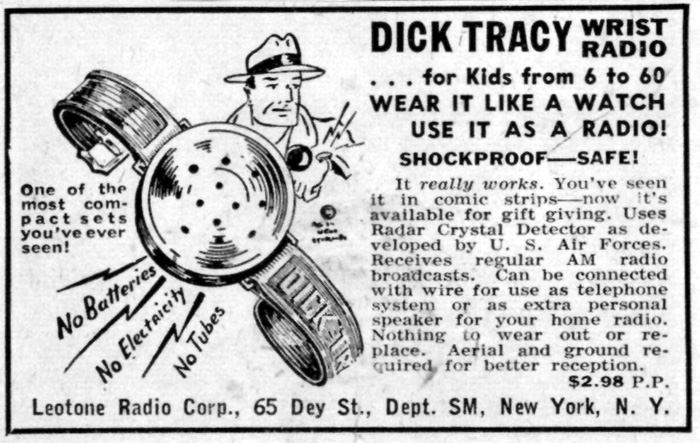