Blondie and Dagwood charmed the world as a typical married couple on the screen radio, and especially the funny-pages.

Choose your CD format
or order disks individually: Add to Cart Add to wishlist
Play a sample episode from June 19, 1944:

"Dagwood Has A Dream" 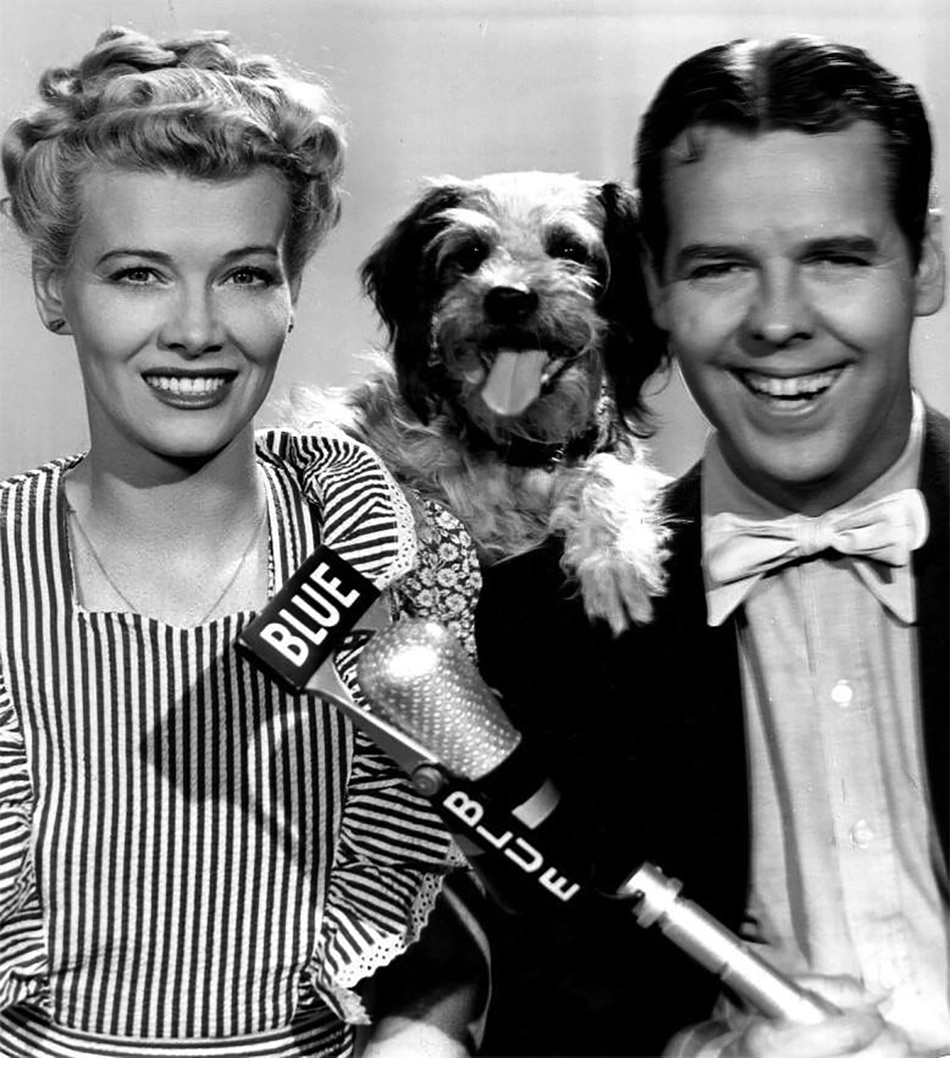 Situation Comedy based on the comic strip,
Blondie, by Chic Young (1939-44)

"Blooooonnnnnnnnnnnnndie! Dagwood Bumstead arrives home after a busy day at the Dithers Construction Company office, where Mr. Dithers threatened him with sharpening his pinkie in the pencil sharpener. But alas, our beloved architect is home eating a mile high sandwich and watching Daisy the dog chase her tail. 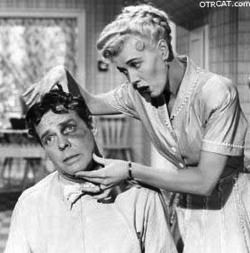 George Burns and Gracie Allen began their act as a "Dumb Dora bit", but they did not invent the term. Dumb Dora, meaning a scatter-brained and foolish young woman, often a "flapper", entered the popular lexicon when cartoonist Chic Young created the Dumb Dora comic strip in 1924 (of course, Dora "wasn't as dumb as she looked").

After six years drawing the strip, newly married Young asked King Features for more money and ownership of the character. Still reeling from the recent Wall Street Crash, King turned him down. Young then created a new character (again, for King Features, but with a more specific contract) named Blondie Boopadoop, another flapper. Flapper culture arose as a product of the Jazz Age following the Great War. They were brash young women who enjoyed the freedom of Jazz, newly available automobiles, and ready access to bootleg liquor.

When she first appeared in 1930, Miss Boopadoop was even more scatterbrained than Dora had been, which may have helped her to attract several boyfriends. As popular as she was with the young men in her world, Blondie gave her heart to railroad heir Dagwood Bumstead. Dagwood's dad, J. Bolling Bumstead, refused to give his blessing to the match until the heart-struck youth went on a month and a half long hunger strike. The old man finally gave his blessing, but because he would marry "beneath his class", Dagwood was cut off from the Bumstead fortune. Dagwood and Blondie finally tied the knot on February 17, 1933.

When she wed, Blondie became a more no-nonsense housewife and the strip began to focus on Dagwood's misadventures. Although not as zany as the schemes of later Sitcom Dads, the Bumstead's were a highly identifiable couple dealing with a demanding boss, nosey neighbors, bills, and building the perfect sandwich. Hollywood noticed the strip's popularity and beginning with Blondie (1938, Columbia Pictures) a series of 28 low-budget films with Penny Singleton and Arthur Lake playing the couple. 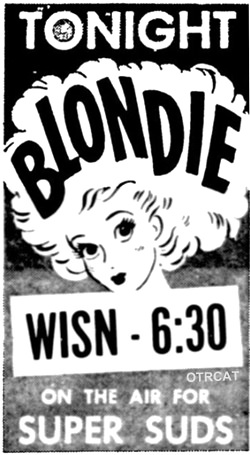 After the first film came out, Singleton and Lake brought their roles to the December 20, 1939 episode of The Pepsodent Show Starring Bob Hope. The radio version of the characters was enough of a hit that they got their own show. Blondie first appeared on CBS Radio as a 1939 summer replacement for sponsored by Camel Cigarettes.

With the release of Beware of Blondie (1950, King Features), the 28th film in the series, everyone involved with the series seemed to agree that enough was enough. Penny Singleton had left the radio series in the spring of 1949, replaced by Ann Rutherford. The series ended in July 1950 after more than 400 episodes. Chic Young remained with the strip until his passing in 1973. Since then, the head writer of the strip has been Chic's son, Dean Young. 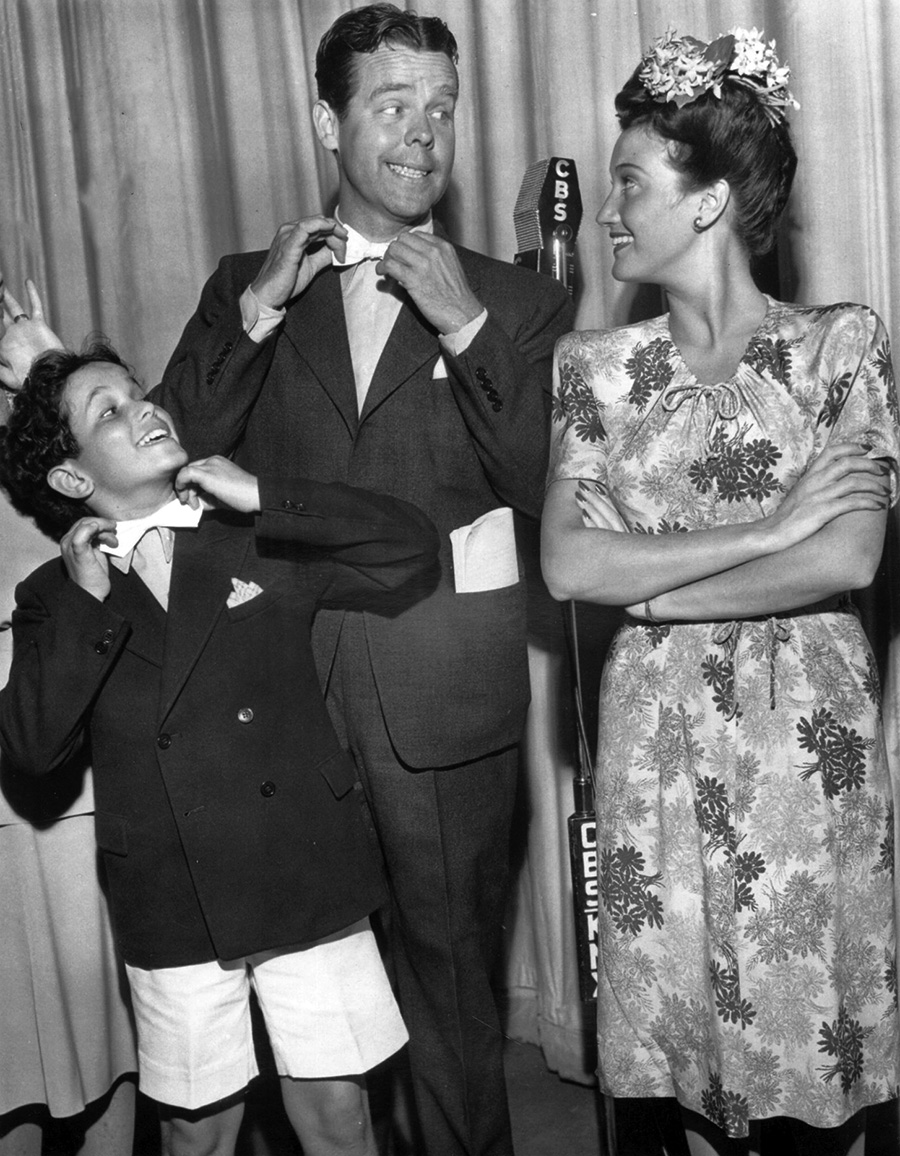