The Shadow of Fu Manchu

The Shadow of Dr. Fu Manchu is a diabolically fun mystery serial from the late 1930's.

Choose your CD format
or order disks individually: Add to Cart Add to wishlist
Play a sample episode from May 08, 1939: 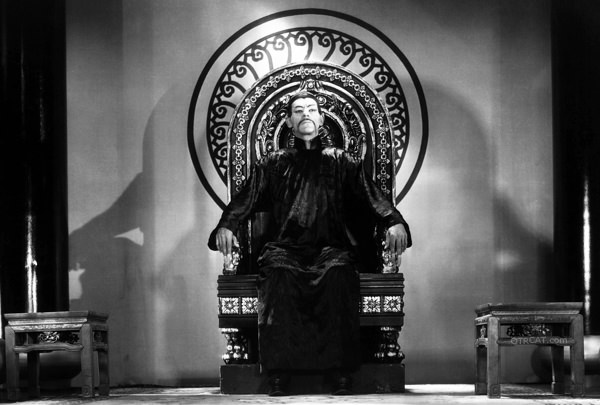 Even with the rise of China as a modern military and economic power, many elements of The Shadow of Fu Manchu are less than politically correct. It must be remembered that they are a product of their times. 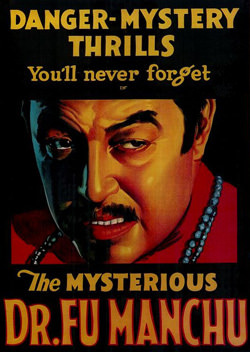 In the late 1800s and early 1900s Secret Societies flourished with the goal of throwing off the yoke of Western Imperialism, resulting in the Boxer Rebellion. Fear of the spread of these Secret Societies to the West gained the nick-name "The Yellow Peril."

English author Sax Rohmer became familiar with the secret societies that ran the gambling and drug trafficking in London's largely Asian Limehouse district. He became acquainted with the reputation of a "Mr. King," who was thought to have a piece of all the action. Local Chinese merchants would react in terror at the mention of his name. Rohmer used Mr. King as the inspiration for his character, Fu Manchu.

Dr. Fu Manchu was "tall, lean, and feline, with a face like Satan with all cruel cunning of an entire Eastern race, accumulated in one giant intellect." Sax Rohmer developed a series of short stories around his master criminal, which were further developed into a series of novels, beginning with "The Insidious Dr. Fu Manchu". The Fu Manchu stories were serialized by Collier's Magazine in 1913.

Fu Manchu was opposed by Colonial Commissioner Denis Nayland Smith, who has discovered Fu's evil genius as part of his roving commission. Smith enlists the aid of Dr. John Petrie. They form a duo in the tradition of Sherlock Holmes and Dr. Watson. Smith resembled Holmes in appearance and manner, but had little of his deductive powers. During the winter of 1938-39, The Shadow of Fu Manchu episodes were recorded at the Radio Recorders studios in Hollywood. Lou Marcelle, the uncredited narrator of the film Casablanca, played the evil Doctor. Two well known character actors took the roles of Denis Nayland Smith and Dr. Petrie: Hanley Stanford of Blondie; and Gale Gordon, Mayor LaTrivia of Fibber McGee and Mollyand Principal Osgood inOur Miss Brooks. Paula Winslow played the lovely and seductive Karamaneh (one of Fu's most dangerous agents, Karamaneh was sold as a slave to the Dr. as a child; she fell in love with Dr. Petrie and saved our heroes many times.) Gerald Mohr (The Adventures of Philip Marlowe) narrated and played several small roles.

Fu Manchu has inspired many other villains, notably Ming the Merciless from Flash Gordon, and James Bond's adversary Dr. No. Fu is a master of mysterious arts from the East, including the use of vipers, green mists, poisonous fungi, biological weapons and strange drugs. Part of Dr. Fu Manchu's terror is that he is only the tip of one tentacle of the shadow empire of the East.

But in the end, The Shadow of Dr. Fu Manchu is diabolical fun in a grand criminal manner. For more mystic radio fun shows, see also: The Green Lama and Chandu the Magician .