This flying adventure with mysterious Captain Midnight and his pals Chuck Ramsey and Patsy Donovan was sponsored by Skelly Oil and took an exciting and melodramatic view of aviation adventure.

Choose your CD format
or order disks individually: Add to Cart Add to wishlist
Play a sample episode from November 23, 1939:

The tolling of a bell, the roar of a plane, and it's Captainnnn Midnight! Announcer Don Gordon's intro signaled flying adventure with that mysterious Captain Midnight and his pals Chuck Ramsey and Patsy Donovan. The successor to Skelly Oil's previous show, The Air Adventures of Jimmy Allen, Captain Midnight took an even more exciting and melodramatic view of aviation adventure.

Captain Midnight, played by Bill Bouchey in the early Skelly west coast transcriptions and Ed Prentiss on Mutual, acted and sounded very similar to that Masked Man. Captain Midnight was Captain Red Albright, a flying ace in the Great War, and he continues battling evil such as master criminal like Ivan Shark. Shark's henchmen are a wonderful bunch of stooges that serve his every evil whim. Shark's frustration and ridicule of their incompetence is great fun. Shark's an exemplary baddie, played in mini-Lorrie style by Boris Aplon.

The adventures are in exotic locals, with twists and turns in the plots that gives the show a serial format and reminds the listener of the more sophisticated I Love a Mystery. It's like Superman, too, in its overdrawn crooks and genre plot devices. Hop Harrigan was created later by the same writing team, and Hop took off with radio's young aviators as well.

The early West Coast shows with Announcer Don Gordon's appeals for Skelly Oil Company are classic old time radio, as he is always needling the kids to tell their parents something about automobiles or gas, like not nursing the brakes, or adding air to the tires. 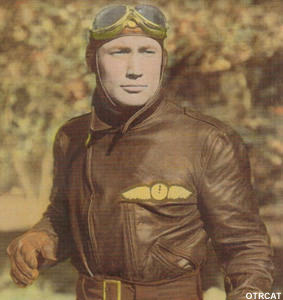 Imagine getting the job of writing commercials for an audience who by law don't use the product (except for air in their bikes tires!) Gordon does a manly job. Especially on those super Captain Midnight Flight Patrol premiums! Thousands of kids joined up, and impatiently awaited the next free thing they could get.

In 1940, the show went national with Ovaltine sponsoring. It had changes in the plot, announcer and characters. Ivan Shark was still circling menacingly, but another baddie with an Oriental accent, the "Barracuda," joins the fray, and the exploits of Captain Midnight's Secret Squadron became even more mysterious. Of course, the shadows of war are why the series gets a little darker, and the Squadron does its part in the effort as American enters WWII. Midnight, a WWII veteran says to a girl Secret Squadron member, "War is terrible, Joyce, but if those rats win, then freedom loses."