Under Arrest was a police procedural drama which would compare favorably with Jack Webb's Dragnet.

Choose your CD format
or order disks individually: Add to Cart Add to wishlist
Play a sample episode from November 07, 1948: 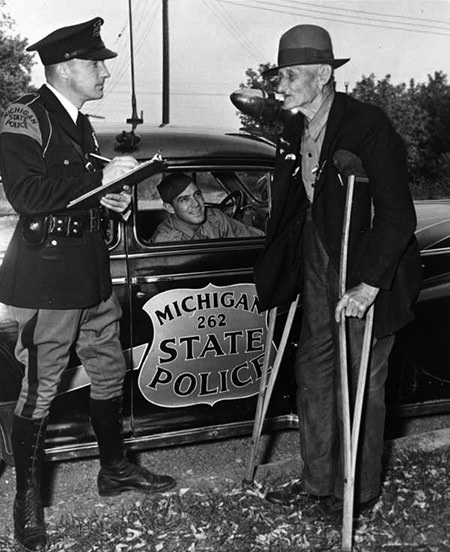 By the summer of 1948, Mutual knew they had a good thing going and added a place filler to hold the audience would be the summer replacement series Under Arrest starring Joe DeSantis.

Like Sgt Joe Friday, Capt. Scott has dedicated his life to protecting the people of his city. One of Scott's recurring themes is that cops are expected to not only do their job but that they have to play by the rules as well. When Capt. Scott's best friend is murdered by a pair of thugs in the debut broadcast, both Scott and his friend's son thirst for revenge. In fact, we learn that Scott joined the force after his own father was gunned down and he wanted to get back at some crooks. Through his long years on the force he has learned that being a cop means more than beating up bad guys, it also means protecting everyone.

Joe DeSantis grew up in New York City and trained as a sculptor. Eventually, he found it more lucrative to simply sculpt for its own sake and make his living as an actor. He made his broadcast debut in 1940 on Pepper Young's Family. DeSantis also appeared on Mr. District Attorney, Gangbusters, The March of Time, and provided the narration for Norman Corwin's On a Note of Triumph which was broadcast at the end of the Second World War.

Like Joe Friday, Jim Scott's beat exposed him to the worst of society, and like Friday he dealt with more than just high-profile murder cases. He also dealt with con artists, jewel thieves, bookies and art thieves. The program is rather realistic for the time period, although it does lack the raw grittiness of Dragnet. Under Arrest played as a summer replacement for the 1948 and 1949 seasons.