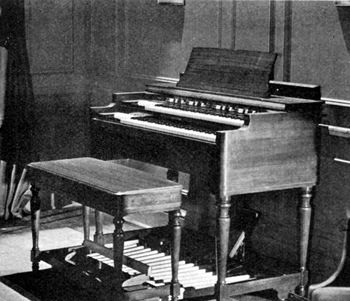 My first memories of listening to radio came in 1931.  That was the year that the powers that be at the National Broadcasting Company lured organist Jesse Crawford away from William Paley’s Columbia Broadcasting System.  And that network rivalry continued into the twilight years of the so-called golden days of radio network broadcasting.

The subject of this glance down radio row is Lew White.  He was a contemporary of Mr. Crawford; while Crawford was entertaining theatre audiences at the Paramount in New York City, Lew White was chief organist for the Roxy Theatre, also in New York.

Not only did Lew White appear at the Roxy, he would drive over to the New York Military Academy—only a few miles from West Point—and present a program of organ classics.  A special love of his was appearing at the Academy every Mother’s Day for a number of years to offer a concert from the keyboard of the 4-manual 31-rank instrument custom-built by the M.P. Moller Company of Hagerstown, Maryland.  The organ contained more than 2,000 pipes and was next-in-size to the famed Radio City Music Hall Wurlitzer.  Imagine being in that Mother’s Day audience to hear Lew White play.

Thousands of radio listeners could hear Lew White just about every day in the week.  His talents were much in demand by the radio networks for broadcasts such as:

He also wrote the theme music for Nero Wolfe and Young Widder Brown—Theme 2.

In addition to his full-time broadcast schedule, organist Lew White recorded for Brunswick, Victor, and Lang-Worth radio transcriptions (in the early 1940’s).

In the past several months I have gone through a number of magazines which provided backstage glances at the radio’s popular performers.  But, nowhere was I to find photos or a profile or two of these "silent artists behind the microphones.  Their hands and feet spoke for them when they played for us.

Recently, I shared correspondence with Bob Ralston, the gifted pianist-organist for the Lawrence Welk TV broadcasts for many years.  Now giving concerts chiefly in west coast cities, Mr. Ralston was interested in a recording in my files.  The recording was an old 78rpm Hit of the Week disk.

So, I made and sent to Mr. Ralston a CDof that cardboard disk: Lew White at the keyboard, Ted FioRito directing the orchestra, and the ballad: "When an Organ Played the Twilight.

With the help of a librarian-coordinator at Cape Cod Community College I was given a photocopy of the New York Times obituary published on March 4th, 1955…the day following the death of Lew White.

Lew White passed on at New York's Mount Sinai Hospital after an illness of several months.  He was born in Philadelphia in 1902…studied violin as a boy.  His father, Herman White, was a renowned music teacher in Philadelphia.

Lew White was a graduate of the Philadelphia Conservatory of Music.  He prepared for his life’s work, playing the pipe organ, by enrolling in special studies at the University of Pennsylvania.

He soon became premier organist with the Stanley Company of America and appeared in theatres across the country.  When the new Roxy Theatre opened at the Rockerfeller Center, Lew White because staff organist.  His film work included background theme music for short subjects produced by Columbia films.

Some of our readers may know that prior to his final illness, Lew White operated The School of Hammond Organ on East Forty-Third Street, New York.

So, next time you hear an OTRCAT dramatic or daytime serial broadcast, you may be listening to the gifted Lew White.

I hope some of his radio transcriptions.  The artist is billed simply as "Lew White and his Pipes of Melody."

Who could resist the sound of the mighty Wurlitzer pipe organ.

Spoiler : I used to work with Lou Dumont as part of the team that started up WFCC in Chatham, Mass., in the 1980s.