It's been an interesting journey researching this profile for OTRCAT.com. The woman whose name you see at the head of this 'profile', Fanny May Baldridge, was known for her writing, producing, announcing, acting, composing, and one-half of a two-some who traveled the famed Chautauqua Circuit in the early 1900's. 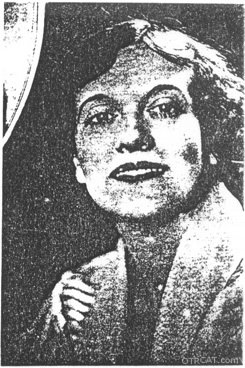 This photo of Fanny May Baldridge appears on page 246 of Radio Personalities (1936).  The yearbook was compiled based upon information from the publicity departments of the NBC, The Columbia Broadcasting System and WOR-Mutual Broadcasting. The lines beneath her photo read:

"Fanny May Baldridge has brought the charm of her native South to the microphone.  Following her engagement in 1928 as the Isovis Sweetheart, she wrote plays about Alabama, playing the part of the Negro mammy. She became director of continuity and production at WHAS in Louisville, and then joined the Chicago staff.  Her scripts -- "In Alabama", "Magnolia and Mose", and "Janie Jones" proved very popular; and "Miracles of Magnolia", written and produced and acted by herself was heard daily for 97 weeks.  Miss Baldridge has acted in Empire Builders, Horlick, Quaker Oats, Swifts, Pepsodent, and Carnation Milk programs, and as Mammy Gardenia in Betty and Bob series for Bisquick. Her production is the only dramatic feature of five to seven characters written, enacted, and produced by one woman for chain broadcast, and holds Chicago record for the longest run of all daily sustaining features"

Fanny May Baldridge sent me through several sources of information in attempts to learn more about her.  Although we seldom hear the lyric to Benny Goodman's signature music "Let's Dance," we give her credit for that accomplishment.  The melody for that theme song was adapted by Gregory Stone and Josef Bonime from composer Von Weeber's "Invitation to the Dance". Before moving on, let's look at the team of writers for the Benny Goodman theme song:

Josef Bonime was a composer, conductor, teacher and pianist, born in Vilna, Poland on Feb 26, 1891.  Her came to the US as a child and was educated at CCNY and Juilliard.  He recorded for early Vitaphone talkies, arranged music for film shorts, and was a conductor on radio from 1925.

Gregory Stone was a composer, violinist and conductor, born in Odessa, Russia on July 20, 1900 and came to the United States in 1923.  He also was a conductor for symphony orchestras.

Fanny May Baldridge, the lyricist, worked with the spoken word.  She was one of the network radio's pioneers as a member of the cast of The House beside the Road.  That broadcast was heard in 1932 by audiences of WOR (New York), WGN (Chicago), WLW (Cincinnati) and WXYZ (Detroit). Within two years, these pioneer radio stations would become part of the newly-formed Mutual Broadcasting System.

I have not heard the broadcast The House beside the Road and it is doubtful any recordings still exist of this interesting series.  But we do know that Fanny May Baldridge was in good company among the actors who included:

"... Fanny may was from Kentucky; Evelynne was from Louisiana.  They came to know one another through their lifelong association with the stories and folk songs of the south.
Miss Baldridge is a soprano whose voice is equally pleasing in operatic and more sympathetic home-song.  Her stories of Negro life are original and she tells them in a delightfully wholesome manner.
Miss Murphey sings charmingly, her voice being of a clear, flute-like quality and she and Miss Baldridge offer delightful duets.  In addition, Miss Murphey also plays the violin and specializes in child stories and pianologues."

Bill Adams was heard regularly on the Saturday morning children's show, Lets Pretend, presided over by Nila Mack.  He was heard on Snow Village Sketches (working with Parker Fennelly, who would become a Fred Allen character known as Titus Moody).  Mr. Adams other broadcast credits include Pepper Young's Family and Valiant Lady.  Oh, let's not forget hearing his voice on the Doan's Pills commercials.

Working with Bill Adams and Fanny May Baldridge on The House beside the Road -- sometimes known as The Wayside Cottage -- was Anne Elstner, whom many may remember as Stella Dallas from 1937 to 1955.  Ms Elstner also was part of the broadcasts of Just Plain Bill, Mr Keene Tracer of Lost Persons, and among others, The Wilderness Road.

Working with Ms Baldridge, Ms Elstner and Mr Adams were two youths who would become household names in a few years.  They were Jackie Kelk (who played Henry Aldrich's Friend, Homer, on The Aldrich Family) and Walter Tetley, whom we know as Leroy, the young nephew of Throckmorton P Gildersleeve.

Ms. Baldridge worked on a number of other radio broadcasts including in Empire Builders, Horlick, Quaker Oats, Swifts, Pepsodent, and Carnation Milk programs, and as Mammy Gardenia in Betty and Bob series for Bisquick.

Before joining the National Broadcasting Corporation staff in Chicago, Ms. Baldridge was a director of continuity and production for Radio Station WHAS, Louisville, Kentucky.  As a script-writer, her work included "In Alabama", "The Miracles of Magnolia" heard daily for 97 weeks and "Janie Jones."

On the famed Chautauqua Circuit, Ms Baldridge and a friend, Evelynn Murphey, were presented as THE DIXIE GIRLS with their special act "the Belles of the 1860s."  Fanny and Evelynne were sopranos.

What else can I say except to thank author Roger C. Paulson for his tireless efforts in writing seven volumes of Archives of the Airwaves, published, 2005 by Bear Manor Media.  He writes that Fanny May Baldridge died on Sept 1, 1961 at the age of 68. (Mr Paulson and I worked for WHDH-TV/radio, Boston, MA from the mid to late 1960s)

Be the first to comment on "Personality Profile: Fanny May Baldridge"