The heroism of the American fighting men during the Second World War was beyond measure. Bravery alone was not enough to prosecute the war, however. The conflict had an enormous impact on the economy of every nation involved. 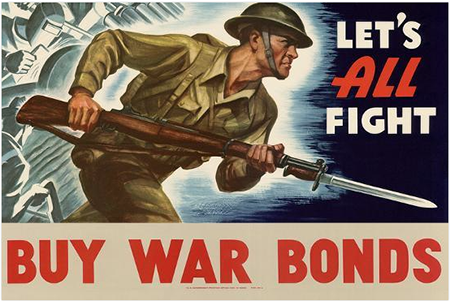 Taken as a whole, WWII was beneficial to the US economy; more than a third of the nation's economic output would be in war related industries. The resources to operate the War machine had to come from somewhere, and the demand was greater than the National Treasury could support at the beginning  of the war.

President Roosevelt turned to Treasury Secretary Henry Morgenthau for solutions. The three options Morgenthau explored were raising taxes, printing more money, or seeking a loan from the American people. Raising taxes would have been the simplest, but increased taxation is never popular, and may have strained the isolationist attitudes that prevailed in the pre-war years. For the government to simply print more money also seemed a natural solution, but was likely to result in an overall devaluation, as well as rampant inflation.

Taking a loan from the citizenry in the form of bonds held a number of significant advantages. Money invested in bonds was effectively taken out of circulation, thereby helping to reduce inflation, but it would reenter the economy, presumably after the war, when it would act as a stimulus as the economy transitioned to peacetime. More significantly, buying bonds was a way for the general population to participate in the War Effort without having to be on the front lines.

The Series E Bonds sold for 75% of their face value, and every effort was made to make buying Bonds simple and even fun. Businesses were encouraged to set up payroll deductions for Bonds. Bond sales kiosks were set up in theater lobbies and shopping area. Promotional materials were everywhere, including a cardboard folder with cutouts to hold 75 quarters-after collecting $18.75, the whole thing could be traded for a $25 Bond.

The Treasury Department saw the benefit of celebrity endorsement, and Hollywood welcomed the chance to be a significant part of the War Effort. Actors went on War Bond Drives, holding rallies across the country. One of the most notable was when singer Kate Smith tapped into the power of radio. Best known for her rendition of "God Bless America", Smith held a 16 hour marathon Bond Drive on the air, which netted more than $40 million in Bonds sold.

The Treasury Department itself got into show business with a series of well produced radio programs which were advertisements for War Bonds:

In 2010, the New York Times published an editorial asking why a War Bond Drive would not be appropriate to help finance the War on Terrorism. The author arrives at a few interesting conclusions. Among them, the American economy has become dependent on consumerism, and taking money out of circulation with bonds would be harmful. Plus, the thought of Tyra Banks and Britney Spears holding Bond Rallies in the Midwest is ridiculous.