Choose your CD format
or order disks individually: Add to Cart Add to wishlist
Play a sample episode from April 03, 1944: 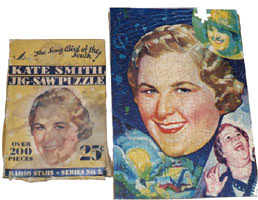 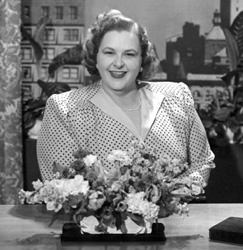 Called the "first lady of radio by Time Magazine, Kate Smith had a long-running radio program that showcased her voice and promoted her to great stardom. Alternately called The Kate Smith Hour, Kate Smith Sings, Kate Smith and her Swanee Music, Kate Smith Matinee, and The Kate Smith New Star Revue, The Kate Smith Show proved to be a venue to launch many new talented performers. The Aldrich Family got their starts by doing skits on her show. 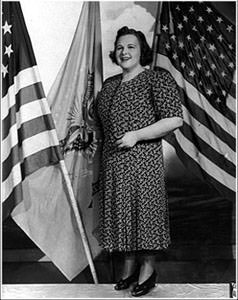 Kate had a bumpy start in show business. Rising from the depths of 1920s vaudeville, she often played the butt of the joke due to her large size. After years of humiliating comments and jokes at her expense, Kate was discovered by a young talent scout, Ted Collins, who became her good friend and life long manager. Splitting their profits 50/50, Collins boosted Kate to great stardom, making her millions of dollars in the process. Collins proved to be a great manager, handling all of her affairs without ever compromising her dignity or grace. Never again was she on the wrong end of the joke.

Kate Smith went on to be known for her fantastic voice, a contralto that could break glass and make the whole building shake. Her program was well received and popularized for its great skits, as well as music and drama performances. Many great stars graced her stage, such as Dizzy Dean, Jackie Gleason, Les Brown, Dorothy Lamour, Ed Sullivan, Veronica Lake, Fred MacMurray, Gene Kelley, and Al Jolson.