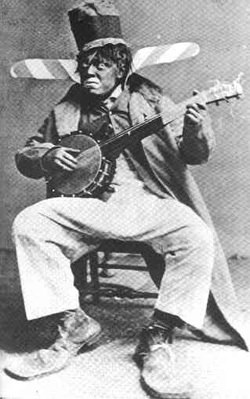 The first recorded blackface performances can be traced back to the early 1600s in Williams Shakespeare Othello out of necessity; black people were not allowed to perform on stage and had limited rights in Europe.  There were blackface performances in America since 1769, when Lewis Hallam, Jr. portrayed a drunken black man in the play, The Padlock.  In the 1810's, localized versions of the blackface clown with curly wig and painted face was popular.  After the war of 1812, Americans yearned to separate themselves culturally from their European counterparts; however, it was Englishman Charles Matthews who took the first major leaps in minstrelsy.

Charles Matthews is considered to be the father of American Minstrelsy; he toured the southern slave states to create a one-man minstrel show in 1822.  Matthews also invented the pun filled "stump speech" after listening to a southern preacher:

Though many would disagree, many minstrel performers claimed that their productions were "authentic" accounts of black southern life and their characters were based on real people. Creator of the plantation dancer character known as Jim Crow, Thomas Rice claimed to have seen a disabled black man dancing in Kentucky.  However, it was with the song entitled "Jump Jim Crow " written by Rice in 1828 that truly popularized blackface minstrelsy in the United States: 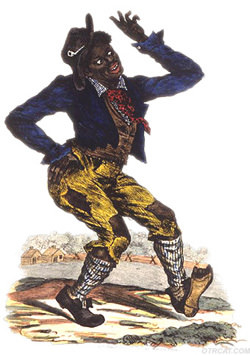 "Come listen all you gals and boys,
I'm going to sing a little song,
My name is Jim Crow.
Weel about and turn about and do jis so,
Eb'ry time I weel about I jump Jim Crow."

The song was wildly successful and "Jim Crow" became a euphuism for an African-American--blurring reality and entertainment.  Consequently, The Jim Crow Laws (enforced between 1876 and 1965) limited the rights of African-Americans, were named after this song.

Minstrel Performances were often a small part of shows, sometimes warm-up comedy or musical acts.  These bawdy shows were considered low-brow and distasteful and many theaters would not allow such performances.  However, U.S. economic panic of 1837, high-end theaters started produce minstrel shows as cheap entertainment because the acts were cheap.  As the politics of the abolitionist movement surged, the popularity of minstrel shows also grew.  Northerner's were curious about southern slave life.  Some performances were somewhat sympathetic showing the cruelty of slavery, causing a ban of minstrel shows in some southern counties.  Towards the beginning of the Civil War, there was a consorted effort to show Northerners that slaves were happy with their lot in life and were simple people who enjoyed the confines of slavery.  The myths of the happy plantation slave, always ready to sing and dance, became more prevalent as the Civil War drew near.