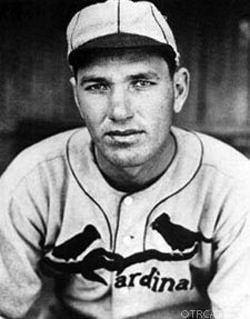 Sports are organized, competitive, and entertaining activities which require commitment, strategy, fair-play and physicality. There will usually be an objective means of determining a winner and loser, often by the scoring of points or reaching a goal or finish line before the other competitors. But more than that, sports are a great equalizer, and can be a metaphor for life's ups and downs.

One of the most appealing and entertaining elements of sport is that the outcome is not certain until the event has concluded. Or to quote a great sports figure, "It ain't over 'til the Fat Lady Sings."

Given the physicality and visual pageantry of a sporting contest, it would seem that sports on the radio would not be a good fit. An interesting aspect of sports is that even after the contest is over, its details can be analyzed forever, which sports fans find endlessly fascinating, even though no amount of analysis can change the outcome of a contest after it is over. 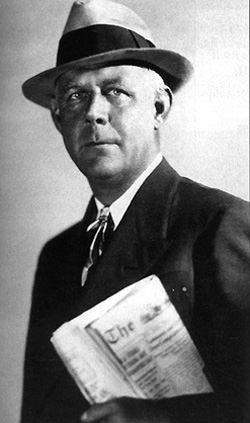 The desire to talk about and analyze sports contests and personalities gave rise to the sportswriter. No modern news organization is complete without a dedicated sports department. The sportswriters were traditionally looked down upon by other reporters because the "news" they covered was not as important as "serious news" like politics or science. When you consider the amount of money that goes into sporting infrastructure, whether is it a professional baseball stadium or a city preparing to host the Olympics, or the ever rising influence of professional athletes with their sky-high paychecks, sports news IS serious news.

Grantland Rice was one of the all time great sportswriters, as much a poet as a journalist. Rice's career rose during the 1920's, and largely thanks to his reporting, this was the period when sports figures began to become nation-wide heroes. The growth of radio networks carrying sports news from coast to coast helped his rise, but mostly it was newspaper syndication that carried Rice's stories. It helped that he had great material to report during the period which became known as the Golden Age of Sports; the Gene Tunney fights, the great thoroughbred Man O' War, the great Notre Dame football teams coached by Knute Rockne, and the rise of a kid from Baltimore they called Babe. 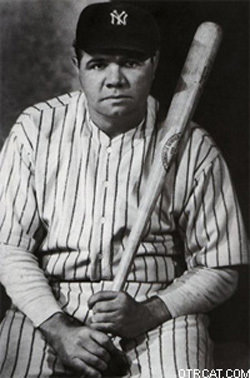 Babe Ruth came into the Major Leagues at a time that Baseball was undergoing fundamental changes. It was the beginning of the "Live Ball Era" of baseball. (Before 1920 a baseball was used until it began to unravel, which gave a terrific advantage to the pitcher, who would scuff the ball to change its flight characteristics, and to make it harder for the hitter to see. In addition as the ball grew softer it would fly off the bat with less force. After the 1920 rule change the ball was replaced as soon as it began to show wear, thus a "Lively Ball" was always in play.) Although he began his career as a pitcher, Ruth is best remembered as one of the original Power Hitters. One player said later "Well I can't rightly say (which player hit the ball hardest), but the ones (home runs by Babe) Ruth hit got smaller quicker." During the 20s Ruth was well known for his hard living celebrity life-style, but also for his unfailing charity, especially for kids. He may or may not have been the hero portrayed in The Adventures of Babe Ruth, but whether the stories in the show are true or not, they are very entertaining.

The Adventures of Babe Ruth: 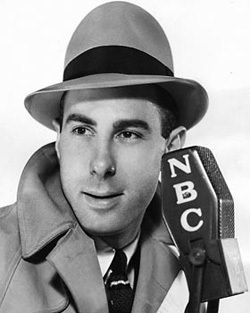 Another great sports journalist was Bill Stern. Stern was better known for his Radio work than Rice, Stern is credited with the first remote broadcast of a Major League Baseball game. He is best known for his detailed play by play announcing, but he did his part to extend the mythos of sport on The Colgate Sports Newsreel.

One sports figure who moved from the field to the microphone was the legendary pitcher Dizzy Dean, who was no poet. Dean had been part of the 1934 "Gashouse Gang" St Louis Cardinals. The Cardinals of the era were noteworthy, not for being polished and flashy, but hardworking and boastful, winning their success on sheer guts. When Dean's career was cut short by injuries, his likable personality and knowledge of the game made him a natural broadcaster. Of course he hid his knowledge behind the persona of an ignorant country boy. Dean was one of those that recognized that sports was largely about showmanship, and showed it in everything he did.

The Yankee Clipper, Joltin' Joe DiMaggio seems the opposite of Dizzy Dean. His popular Personality Program featured a Kids Versus Adults Sports Quiz as well as a small drama about baseball.

It may seem that we are spending a lot of time talking about baseball and baseball heroes. Perhaps that is because Baseball and Old Time Radio go together so well. Even in the days of satellite sports channels, some of us feel it is more fun to "watch" our favorite Big League Club on the radio. A wise man once said of baseball "This is a very simple game. You throw the ball, you catch the ball, you hit the ball. Sometimes you win, sometimes you lose, sometimes it rains."

Our Baseball Collection is filled with some of Classic Radio's best Baseball Shows. The Saint and Ellery Queen of course find crime at the ball park. Past stars Dizzy Dean and Satchel Paige are celebrated. Babe Ruth is remembered by Bill Stern and Readers Digest. Lux Radio brings us some of the best baseball movies of all time, including "Pride of the Yankees". Fred Allen has fun at the Park and so does the Great Gildersleeve. Fibber remembers his days pitching as "Fireball McGee". And Jack Benny, well, what can we expect when Jack Benny loses a bet on the World Series?

Just talking about sports and sports figures gives many people a lot of pleasure, and the military occasionally took advantage of this. In 1955 Air Force recruiting syndicated a very entertaining 15 minute show, Big Moments in Sports. The show featured moments from Professional Football, Auto racing, golf, and the Olympics. Tops in Sports was also presented by the Air Force, but this time for the Armed Forces Radio Network and entertainment and morale building for the troops overseas. 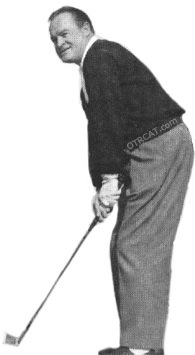 NFL star Kyle Rote featured interviews and biographies of a number of greats from baseball, football and basketball.

Of course not all sports require the use of a ball. Sometimes the drama is seeing who will cross the finish line first. And sometimes the athlete isn't even a person! The Kentucky Derby takes place on the first Saturday in May every year. With all the pageantry and tradition, the highlight is still the two minutes as the announcer calls the race.

In contrast our Golf Collection presents a very human game. It is enjoyed by professionals and amateurs alike. There is a lot of comic potential in a game with a little white ball the just... won't... go... into... that... stupid... little... hole!

Talking about sports is all well and good, but there is nothing to rival the contest as it is actually happening. Our collection of Sports Broadcasts capture that in great games from the past. It may seem strange to hear sporting events on the radio to the generation that came up on ESPN, but it can be a lot more fun to listen to a game on the radio. This is especially true when you can enjoy the game, and miss nothing thanks to the talents of the announcers, and still be able to turn the burgers and hotdogs grilling in your own back yard.

<< Go back to OTRCAT.com's extensive collections of sports-related broadcasts...

Spoiler : Fantastic memory of listening to these games as a kid. Thanks!!!

Reply
Spoiler : I love your collection of old baseball, football and other sports broadcasts.