The only equipment needed is two hoops and a ball, but Basketball is a worldwide phenomenon with important lessons.

Choose your CD format
or order disks individually: Add to Cart Add to wishlist
Play a sample episode from October 27, 1948:

The "Father of Basketball" was Dr. James Naismith. Naismith was born in Almonte, Ontario, Canada, and orphaned at an early age. As a youth, he struggled with his school lessons but developed considerable physical strength and a strong work ethic working on his uncle's farm where he was raised. There was plenty of play along with the hard work, and a favorite game of James and his cousins was "Duck on a Rock", a combination of marksmanship and "tag" where a stone is placed on another stone or stump. Players take turns tossing rocks attempting to knock down the first stone, and when the stone falls there is a mad scramble as the players retrieve their rocks before being tagged "it" and having to take a turn guarding the "duck" (children in the Philippines, where basketball is a national obsession, play a similar game called tumbang preso, rather than stones, the equipment is an empty tin can and the missiles are the kid's flip-flop slippers). Little James quickly figured out that a soft, lobbing toss was more effective than a hard throw. 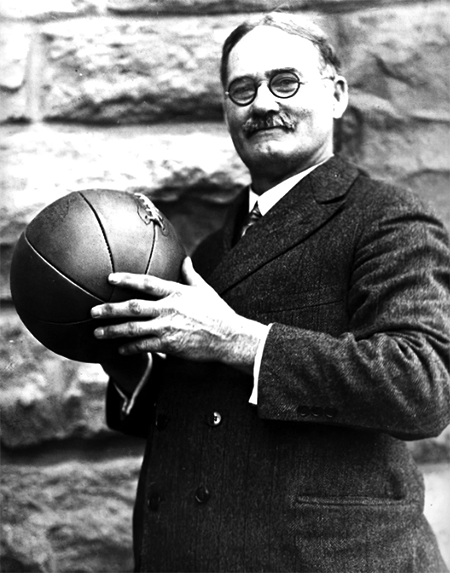 Although Naismith struggle with his studies as a child, when he entered high school and later McGill University, staff took extra time tutoring the young man whose athleticism was greatly valued in Canadian Football, lacrosse, rugby, soccer, and gymnastics. He attained a bachelor's degree in Physical Education and was eventually hired as Athletic Director at the YMCA in Springfield, Massachusetts. The purpose of the YMCA movement was, in part, to provide a physical outlet for young men, especially those who had come into the city from the surrounding countryside during the Industrial Revolution. The rowdy gang at the Springfield Y usually channeled their extra energy into track and field, soccer, and baseball, but being trapped inside by the harsh New England winter meant trouble sooner than later. The facility's director assigned Naismith to come up with a game to provide an "athletic distraction".

He had an indoor gymnasium to work with, but the "rough and tumble" of rugby or soccer on a hard floor was a recipe for injuries. The large, soft soccer ball would be less dangerous than a hard baseball, and since most injuries outside occurred from hard physical contact while carrying the ball, passing would be the primary way to move the ball around the gym. Remembering his lobbing tosses from "duck on a rock", Naismith had a peach basket nailed to the mezzanine rail at either end of the gym, the class was divided into teams, and the resulting game became more than a distraction for the rowdies, it became an obsession.

There were a few problems. Play was delayed when the school custodian had to be called to get the ball out of the basket until someone was inspired to cut the bottom of the basket out. Spectators would gather on the mezzanine and in their enthusiasm sometimes blocked balls from going into the basket, so Naismith had backboards installed between the basket and the fans, not only preventing interference but allowing shots to rebound into the basket. When asked what to call the new game, one of the players suggested "Naismithball" but the ever-modest athletic director replied the had baskets and a ball, so basketball it was.

The universal appeal of basketball is its accessibility. The poorest of communities can fund the installation of hoops at either end of a public court, and the only other equipment needed is a ball. These same communities will rally behind their local team as the lads learn important lessons, not only about athletics but teamwork and community pride. Unfortunately, enthusiasm for the game can degenerate into crime when betting is involved.  The Life of Riley, Big Town, Easy Money, Dr. Christian, Suspense, This is Your FBI, and even Superman have episodes which show the corruption resulting from betting on basketball. However, this insipid evil is more than counterbalanced by the life lessons found on the basketball court on Fibber McGee and Molly, Our Miss Brooks, Jerry at Fair Oaks, The Aldrich Family, and, again, Superman.