Close your eyes and imagine big hats and drinking Mint Juleps and as the horses run for the Roses during The Most Exciting Two Minutes in Sports - the Kentucky Derby! 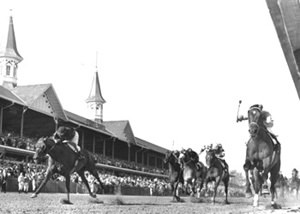 Experience the thrill of The Most Exciting Two Minutes in Sports, the Kentucky Derby!

The Kentucky Derby is one of the oldest thoroughbred horse races in the United States. Itis the first jewel in the Triple Crown which includes the Preakness Stakes and the Belmont Stakes. Atone and quarter miles, the race is known as"The Fastest Two Minutes in Sports".

The Kentucky Derby occurs every May and is one of the most well-attended races in the Triple Crown. Tradition is an enormous part of the Derby experience. Think about strolling around sipping a Mint Julep, watching the celebrities and the well-dressed ladies in large hats. At the end of the, take a walk over to the winner's enclosure to see the winning horse blanketed with a coverlet of 554 red roses.

Listen to the runs of past Triple Crown winners,War Admiral (1937), Whirlaway (1941) and Citation (1948). There have only been 11 Triple Crown winners in the over 100 year history of the race. It is a hard feat for a horse to accomplish. A horse has to run three races within five weeks, and each of those races is longer than others the horses have run in the past.

As a bonus: included are several of the races of the legendary Seabiscuit.  Seabiscuit, born in 1933, quickly gained a reputation as a knobby-kneed, lazy and underperforming "also ran". Trainers saw potential in the horse, but could not bring it out until Seabiscuit began racing in California. On the West Coast, Seabiscuit began to live up to his potential, winning many races but finishing in extremely narrow seconds in the Santa Anita Handicap races. After a highly publicized race against Bing Crosby's Ligaroti, Seabiscuit was given a shot at the "Match of the Century" against Triple Crown winner War Admiral.  After the match of the century, Seabiscuit received what was expected to be a career ending leg injury, but with care and perseverance, Seabiscuit's last race was the incredibly dramatic 1940 Santa Anita Handicap. Seabiscuit's performance and comeback made him a symbol of hope during the Depression Years.

One thing that can be said about any horse race, but especially these significant historic races they are the most exciting two minutes in sports!