The Romance of Helen Trent

Fans followed The Romance of Helen Trent faithfully for nearly 27 years of the good and bad, joy and calamity.

"Walks Into A Trip"

The Romance of Helen Trent was one of the most beloved of all the old time radio shows, and its loyal fans faithfully followed, year after year, the unending triumphs and heartbreaks of their glamorous star-crossed friend, Hollywood dress designer Helen Trent. Like a good friend, Helen was there for them, sharing her innermost secrets in heartbreaking fifteen-minute slices, for nearly three decades. The grand romance finally ended after over 7, 200 episodes in 1960. In fact, Helen outlived most of network radio! 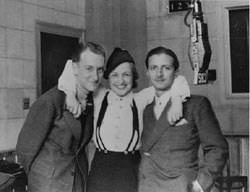 Virginia Clark ('Helen'-center),
and David Gothard (left), from the
The Romance of Helen Trent.
The man on the right was unidentified. Produced by the classic radio production team of Frank and Anne Hummert, They did other classic soaps, such as Ma Perkins and Just Plain Bill, as well as detective dramas like Mr. Keen, Tracer of Lost Persons. In the mid-1930s, the Hummerts had prolific writer Bob Andrews crafting Helen Trent, Just Plain Bill, Skippy and Judy and Jane and more each week - more than 35 installments!

The Romance of Helen Trent was a bastion of soap opera formula. First and foremost was the obvious theme of god and bad, joy and calamity, conscience and impulse. Melodrama is what the critics call it. Fans call it real life, if perhaps a little dramatic. But so listenable! Virginia Clark and then Julie Stevens played Helen for many years each. An honor role of radio actors played villains and friends alike, though sometimes it seemed they were both at the same time! Helen was schemed after by Hollywood moguls, directors, attorneys, oilmen, millionaire ranchers, world travelers, even a mad hypnotist! But Gil Whitney was her abiding love for over 18 episodic years. Gil Whitney, a "brilliant and prominent attorney," became at one point a secret government agent. Then he was paralyzed in a train wreck. Finally, he married not Helen but her nemesis, Cynthia Swanson. Over the years, three actors including Marvin Miller played Gil.

Of course, the plots never let an uncertain emotion go unnoticed. Even death was a part of the show. In fact, the show ended with Helen waiting for the momentary return of her beloved on a balcony that suddenly collapses with a sickening crash! Silence. Then we hear Gil's plaintive voice, calling "Helen, it's Gil Helen!"

For more soap opera and human drama, see One Man's Family, Family Doctor, Doctor Christian, The Doctors' Wife, and Green Valley Line. Of course, there are many, many family radio comedy shows, such as The Life of Riley, Father Knows Best, My Favorite Husband, Phil Harris and Alice Faye Show, The Adventures of Ozzie and Harriet, The Great Gildersleeve, The Goldbergs, and Life with Luigi.