Although not mandated by the Constitution and a "tradition" which only goes back to 1960, Americans have come to expect a broadcast debate between their Presidential Nominees as a part of the Election Process. 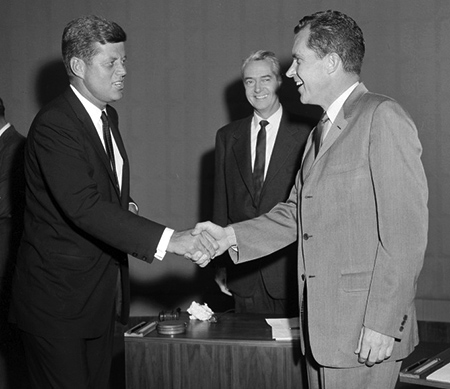 The Cambridge Union, which considers itself to be the oldest and largest student debating society, states that competitive debating is "a fun activity akin to a game". However, when the stakes are the Presidency of the United States of America and Leadership of the Free World, fun is forgotten, and the debates can become deadly serious.

Scholarly debate began in the symposiums of ancient Greece as a device for students to develop oratorical skills. A truly skilled debater can attack or defend a particular position or issue with skill, whether or not that position conforms with their personal beliefs. Debate also became an important part of Grecian Democracy when issues were discussed and debated in public forums.

Formal debate entered the American political scene with the Lincoln-Douglas Debates of 1958. At the time, Lincoln was the Republican nominee for US Senator from Illinois and Douglas the incumbent Democrat. They agreed to participate in a series of seven debates in various Illinois districts with the following rules; there would be no moderator, one man would speak for an hour to establish his position, his opponent would have an hour-and-a-half rebuttal, and then the first would speak for thirty minutes in defense of the rebuttal. Senator Douglas kept his seat in 1858 and helped win a Democratic Majority in the Illinois House. However, Lincoln’s performance in the Debates was instrumental in securing the 1860 Presidential Nomination. Senator Douglas of Illinois led the Democratic ticket.

There were a few Presidential Primary debates, notably between republicans Thomas Dewey and Harold Stassen in 1948 and Democrats Adlai Stevenson and Estes Kefauver in 1956. The first formal Presidential Debates took place between Senator John Kennedy and Vice President Richard Nixon during the 1960 election. The first of four debates took place in the studios of WBBM-TV Chicago on September 26. Interestingly, radio audiences generally felt that with his greater knowledge of foreign affairs and policy, Nixon won the first debate, however, Kennedy was able to project a youthful, winning image over television which historically proved to make all the difference. 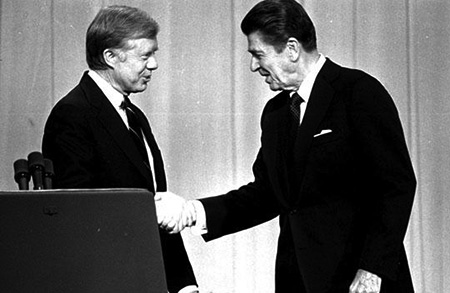 There would be no debates between the Presidential Nominees until the 1976 Race between Governor Jimmy Carter and Sitting President Gerald Ford. The Campaigns agreed to three debates sponsored by the League of Women Voters, on Domestic Issues, Foreign Policy, and the final debate on open topics. A debate between the Vice-Presidential Candidates, Senators Walter Mondale, and Bob Dole, was also scheduled. About an hour and nineteen minutes into the first debate, while Carter was making a statement, the audio feed television networks from the Walnut Street Theatre was interrupted by a technical glitch. At first, the Candidates continued speaking but when informed of the glitch they both stood quietly at their podiums for 17 minutes awaiting repairs.

From a historical perspective, the second debate over Foreign Policy on October 6 became more important. Up to this point, President Ford appeared to be pulling ahead in the polls but during the debate he blundered, stating that "There is no Soviet domination of Eastern Europe". Ford's momentum stalled, and Carter won what would be a close election.

Like the Lincoln – Douglas Debates, one of the most interesting debates in this collection is not part of a Presidential Race, although it would have impacts and implications of future Races. The event was part of CBS TV's Town Hall Meeting of the World on May 15, 1967. The topic was "The Image of America and the Youth of the World" and was broadcast from three different studios. In London, an international panel of university students who were angry over US involvement in Southeast Asia and generally resentful of "American Imperialism" gathered (the only American on the panel was Rhodes Scholar and future basketball star and Senator Bill Bradley). In Washington D.C. was Senator from New York, Robert F. Kennedy, who was still undecided whether to throw his hat in for a White House Run. In Sacramento, California was former actor and Governor of California (elected in 1966) Ronald Reagan. 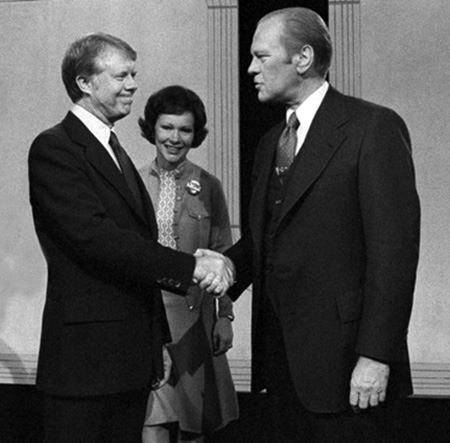 The Student Panel immediately began to attack Kennedy, Reagan, and American Policies. Kennedy came off as apologetic and inexperienced. With his depth of acting experience along with being mentored about Vietnam by former President Eisenhower, Reagan held his own and made good points although he still had difficulty with the rowdy enthusiasm of the student panel.

The debate is often regarded as Ronald Reagan's debut on the World Stage. As the '68 Presidential Campaign progressed, Kennedy developed into a more effective speaker and debater. With the Democratic Convention about to begin and having won the California Primary, Kennedy was the presumptive Nominee but in the early morning hours of June 5, 1968, while exiting the Ambassador Hotel in Los Angeles, Bobby Kennedy was felled by an assassin's bullet.

While Ethel Kennedy, then pregnant with their eleventh child, was standing vigil over her dying husband, she received a hand-written note from Governor Ronald Reagan. Realizing no words would console a grieving widow, the Governor kept his message to-the-point, "I know there is little anyone can say at such a time but if there is anything we can do to be of help in any way, please let us know. Our thoughts and prayers are with you. Nancy and Ronald Reagan." He even offered up the services of his brain surgeon father-in-law, Dr. Loyal Davis.

On June 5, 1981, Ethel Kennedy joined President Ronald Reagan in the White House Rose Garden for the presentation of the Congressional Gold Medal struck in honor of Robert Kennedy. Reagan would pass away from complications due to Alzheimer's Disease at the age of 93. The date was June 5, 2004.