Sometimes thought of as 'the good Kennedy', Robert F. Kennedy had more in common with his mother, Rose, than with his father or even his older brothers 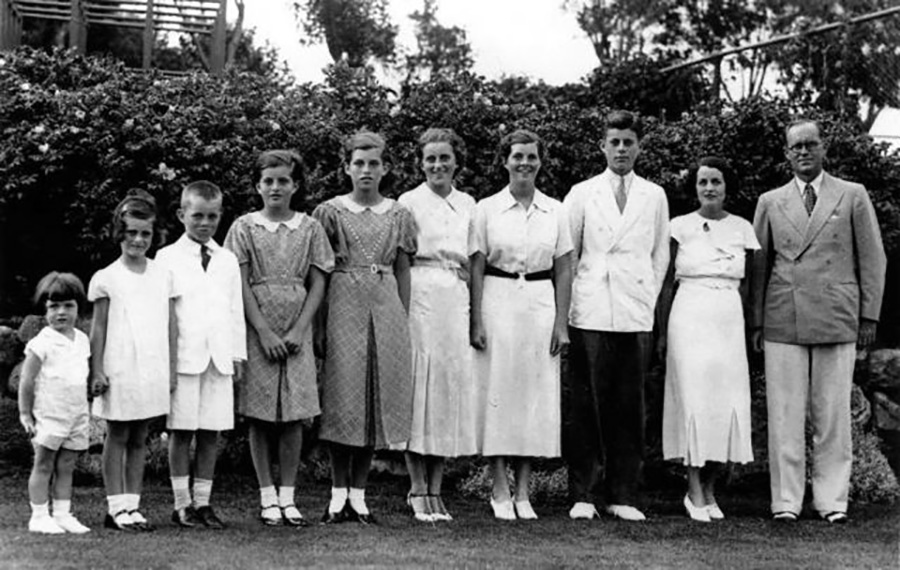 Relationships between fathers and sons are notoriously complex. A father's greatest desire is to see his sons succeed, even surpass the achievements of their Old Man, and a degree of ruthlessness may enter to temper the situation. The Big Brother-Kid Brother relationship can be even more tenuous as it is often based on a combination of love and competition.

The media has long held a theory that the sons of Joseph P. Kennedy Sr. came to manhood under some sort of curse. Kennedy Sr.'s family were leaders in Boston's Irish Catholic Community, but this background kept him separate from the "Boston Brahmins" who were seen as leaders of New England Society. Joe married Rose, Boston Mayor "Honey Fitz" Fitzgerald's eldest daughter, and built a fortune through shrewd investments during the Prohibition Era. His ambition along with his status as one of the wealthiest men in the country made Joe Sr. a big wheel in the Democratic Party and he was closely aligned with Franklin D. Roosevelt.

Joe and Rose had nine kids; Joe Jr, born 1915, Jack, Rosemary, Kathleen, Eunice, Patricia, Bobby, Jean, and Teddy, born in 1932. Unsurprisingly, Joe's ambitions were passed along to his eldest sons, dashing Joe Jr and precocious Jack. Between these two sins, his business and political associations, and four daughters, Joe Sr. had a full plate by the time Robert F. Kennedy was born in 1925. Largely ignored by his father, Bobby tried to compensate by winning the favor of his older brothers who were enough older that they, too, had little time or attention for a kid brother. However, Bobby did become the apple of highly religious Mother Rose who imbued Bobby with a sense of purpose. 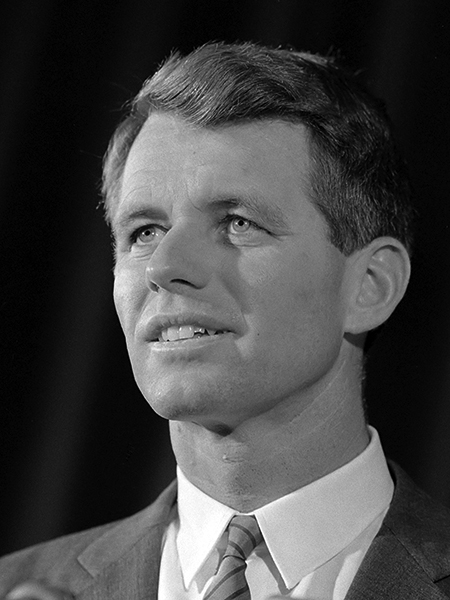 It is easy to read more into the dynamics of the Kennedy boys and their father than may have actually been there. Joe Sr. was frequently absent while they were growing up because of business and politics, but the Kennedy Clan was a notably fun-loving and tight-knit family, albeit with individual quirks. Bobby took a paper route to demonstrate that he could stand on his own; any parental pride in the endeavor was squashed when it was discovered that the family chauffeur was driving him along his route in the Rolls Royce!

Bobby, Mama Rose, and the younger Kennedy siblings joined Joe Sr. in London where he had been appointed Ambassador to the Court of St. James. Joe Jr. and John had attended prep school together and entered Harvard. Joe was an outstanding athlete while Jack was often bedridden with colitis. The younger Kennedy still managed to achieve a degree of athletic prowess on the varsity swim team and as a yachtsman. Bobby and Mama Rose sailed back to the US in 1939 so he could enter prep school. In her husband's absence, rose enrolled her favorite son in a Catholic boarding academy. Although his classmates referred to him a "Mrs. Kennedy's little boy Bobby", he earned a reputation for scrappiness as well as piety.

The older Kennedy boys were given commissions in the US Navy. Joe Jr. became an Aviator but Jack was the first to achieve distinction when his PT Boat was sliced in half by a Japanese Destroyer and the young officer's efforts saved his surviving crew. It has been put forth that Joe Jr. may have been jealous of the fuss made over Jack's medals and that led him to volunteer for what would prove to be a foolhardy if heroic mission that took his life over the English Channel.

The whole Kennedy clan was devastated over Joe Jr.'s loss. Joe Sr. transferred his political ambitions to John and began paying more attention to Bobby. Almost a year before Joe Jr. was killed and six-weeks before turning 18, Bobby enlisted in the USNR as a Seaman Apprentice. His background landed him in the V-12 Commissioning Program at Bates College where he would spend most of the War. He chafed at being so removed from the action, especially after Joe was killed. In December 1945, the USS Joseph P. Kennedy Jr (DD-850) was commissioned and Robert was allowed to disenroll from the V-12 program and serve aboard the destroyer during its shakedown cruise as a Seaman Apprentice. He was Honorably discharged in May 1946.

By the time Bobby got out of the Navy and entered Harvard as a Junior (he got credit for his time in the V-12 program), brother Jack was campaigning for a seat in the House of Representatives. Along with his studies, Bobby worked on Jack's campaign. After Jack won the seat, Bobby graduated with the Class of '48 and embarked on a six-month tour of Europe and the Middle East acting as a correspondent for the Boston Post. Several of the stories he filed covered Palestinian Tension at the end of the British Mandate. After the trip, Robert entered the University of Virginia Law School and married Ethel Skakel in June 1950. In the fall of 1951, Congressman John Kennedy, Robert, and their sister Patricia embarked on a seven-week tour of Asia. Because of their age gap, Jack and Bobby were not especially close growing up, but on the Asian Tour, they became close friends.

Robert managed Jack's successful 1952 Senate Campaign. At the end of the year, Bobby was appointed Assistant Counsel to the Senate Permanent Subcommittee on Investigations under Senator Joseph McCarthy (a friend of Joe Sr.'s). Although Kennedy was a staunch anti-Communist, he found McCartHy's aggressive methods distasteful and resigned in the summer of 1953. He went to work as an aide on Adlai Stevenson's campaign for the 1956 Presidential election to gain National experience for Jack's intended run in 1960.

John's Presidential Campaign, chaired by Bobby, was hard-fought from the Primary Race through the General Election. It took Joe Sr.'s urging for John to appoint his kid brother Attorney General, but Bobby soon filled the role as the President's right-hand man. As AG, Kennedy launched a dogged crusade against the Mafia and Organized Crime, especially the alleged corruption of Teamsters Union Boss Jimmy Hoffa. Additionally, many, if not most, of the Kennedy Administration's Civil Rights Initiatives were launched from Bobby's desk. 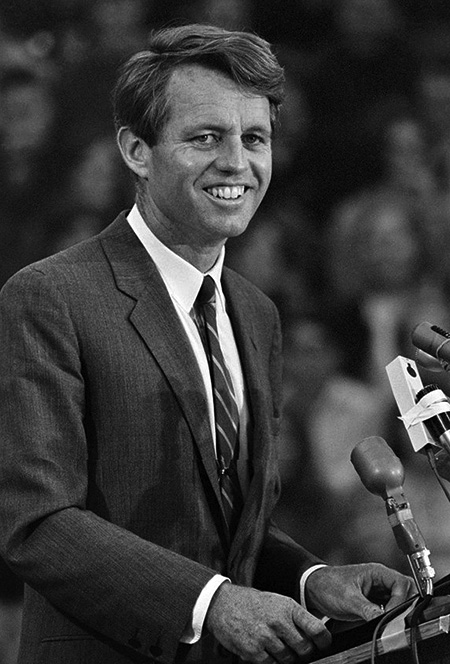 After the Assassination of President Kennedy, Bobby seemed to assume the mantle of "Keeper of the Kennedy Dream". He stayed on as AG until resigning to begin his own Senate run in 1964. The Democratic Leadership was highly enthusiastic to name Robert Kennedy as LBJ's running mate in 1964, but Johnson and Kennedy had long held a deep personal dislike for each other.

Kennedy left the Attorney General's post in 1964, just days before the Democratic National Convention, to begin his own run for the US Senate seat from New York (he chose not to run in his home state of Massachusetts because his younger brother, Ted, already held the seat). As Senator, he continued to push a Civil Rights agenda and presented a plan to get the US out of Vietnam.

In the early months of 1968, Kennedy announced that he would not oppose incumbent Johnson for the Presidency, but by mid-March had changed his mind. On March 31, President Johnson shocked the nation with his announcement that he would not seek reelection, but Kennedy still faced a difficulty Primary Season as he went up against Vice President Hubert Humphrey and anti-War Senator Eugene McCarthy.

McCarthy had a strong showing in the New Hampshire Primary in the wake of the Tet Offensive before Kennedy joined the race. Humphrey had the backing of the Democratic Establishment. Kennedy's platform of racial and economic justice was embraced by many of the electorate. An impromptu test of Kennedy's leadership came on the night of April 4, when the assassination of Rev. Martin Luther King was announced; he was campaigning in Indianapolis and gave an unrehearsed speech calling for unity of the races. Rioting broke out in 60 cities across the country but not in Indianapolis, which many attributed to Kennedy's speech.

After losing in Oregon to McCarthy, it became obvious that Kennedy's race was still vulnerable, so he put extra effort into the South Dakota and California primaries. His win in California on June 4 effectively took McCarthy out of the running. Around midnight, Kennedy addressed supporters in the ballroom of Los Angeles' Ambassador Hotel, promising to heal Party divisions at the National Convention in Chicago.

Against the advice of his bodyguard, Kennedy chose to exit the ballroom via a shortcut through the hotel's kitchen. There, he was greeted by a line of congratulatory kitchen and housekeeping staff as well as a 24-year-old Palestinian named Sirhan Sirhan who was carrying a .22 caliber revolver. The Palestinian had objected to the Senator's unwavering support for the State of Israel, which he blamed for the problems his family has faced.  Sirhan emptied his revolver, and a second of Joe Kennedy's boys fell to an assassin's bullet

LBJ had feared that his administration was doomed to have been "bookended by the Kennedy's". Richard Nixon was an admirer of RFK, and, to a certain degree feared running against him in the General Election; as it was the confusion in the Democratic Party after the Primaries, Kennedy's assassination and the Chicago Convention helped to sweep him into the White House. There is a report that when Bobby told Joe Sr. that he was about to run for President, the old man took it hard; "He no longer wished to see three sons as president, he only wished to see the last two alive." 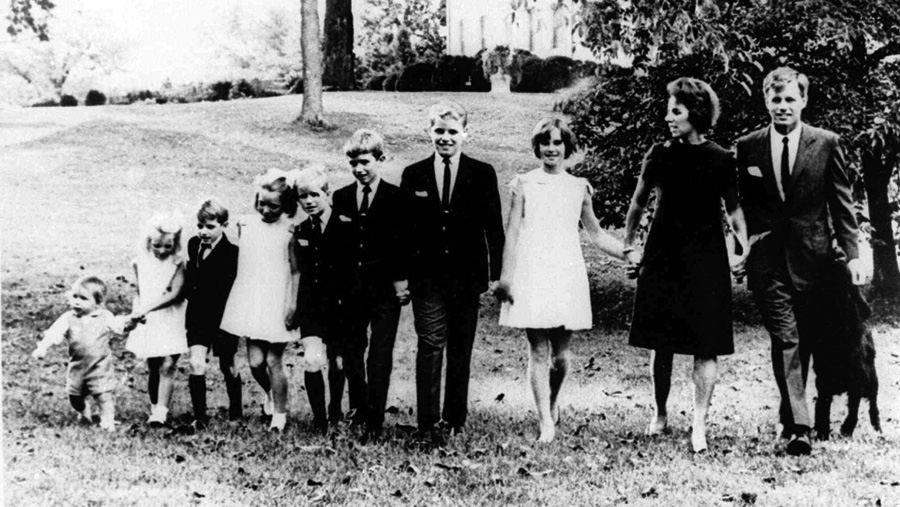