President Ford became President when Richard Nixon left the office of presidency due to the Watergate scandal. Until the passing of the 25th Amendment to the Constitution, no formal mechanism was in place to fill a vacancy in the Vice Presidency. In fact, Harry Truman had no Vice President for nearly four years after succeeding FDR. The Amendment was adopted in Feb, 1967, and invoked for the first time when Gerald Ford was appointed to the office of Vice President after Spiro Agnew resigned in 1974.

Ford was the only person to have served as both President and Vice President without being elected by the Electoral College.

Ironically, there are few men with a background better suited for going into elected office than Gerald Ford. Ford grew up in Michigan, became an Eagle Scout, was a star athlete and captain of his high school football team, and was a star player at University of Michigan. He attended Yale Law School and was admitted to the Michigan Bar in 1941. As he was preparing to open an office in Grand Rapids, the War began.

Ford received a commission in the US Navy in April 1942. His first duty was as an academic instructor and coach at a preflight school. Later he joined the USS Monterey for action in the Pacific, participating in action with the Third and Fifth Fleets. When the Monterey suffered typhoon damage, Ford went back to instructor duty. Returning to civilian life he married former fashion model Elizabeth Bloomer Warren.

Ford also became active in Republican politics after the War. He had learned the importance of America's leadership in the world while the incumbent congressman from his district was a dedicated isolationist. Ford set about replacing him and served 25 years in the House of Representatives. Considered a "Congressman's Congressman", Ford served on a number of prominent committees. After the Kennedy assassination Ford Served on the Warren Commission. He served as House Minority Leader for eight years. In October 1973, Vice President Agnew resigned while facing charges of tax evasion and money laundering. President Nixon consulted with senior Congressional leaders about a replacement, and the gave him "no choice but Ford." The new VP attracted little attention as the Watergate Scandal was breaking at about that time.

Ford and his wife were preparing to move from Virginia to the Vice Presidential residence when White House Chief of Staff Al Haig warned "smoking gun" evidence had been found. Ford told his wife "Betty, I don't think we're ever going to live in the vice president's house."

President Nixon resigned on Aug 9, 1973, and Gerald ford immediately took the oath of office. In his first address as President, he acknowledged that the American people had not selected him with their votes, "so I ask you to confirm me with your prayers."

Largely as a backlash from Watergate, the midterm elections of 1974 left the Republicans with a serious minority in both the House and Senate. Ford pardoned Nixon for any crimes he may have committed in relation to Watergate, saying it was in the best interest of the nation.

There were two assassination attempts against Ford within three weeks of each other, both in California. The assailants were Lynnette "Squeaky" Fromme in Sacramento and Sara Jane Moore in San Francisco. 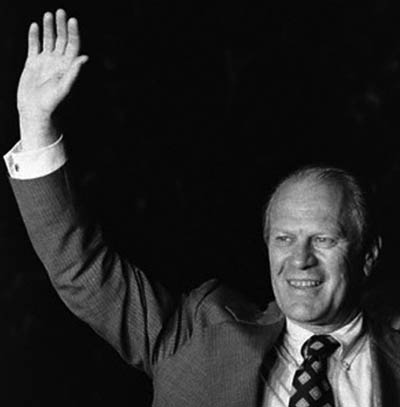 Ford reluctantly agreed to run for "re-election" against the backdrop of the Bicentennial celebration in 1976. He faced stiff opposition from conservative California Governor Ronald Reagan in the primaries. Peanut Farmer and Washington outsider Jimmy Carter defeated him in the general election.