Major events during George W Bush two term presidency include the terrorist attack on 9/11 and the wars in Iraq and Afghanistan.

Choose your CD format
or order disks individually: Add to Cart Add to wishlist
Play a sample episode from October 07, 2001:

"I can hear you, the rest of the world can hear you and the people
who knocked these buildings down will hear all of us soon."

"Freedom itself was attacked this morning by a
faceless coward, and freedom will be defended." 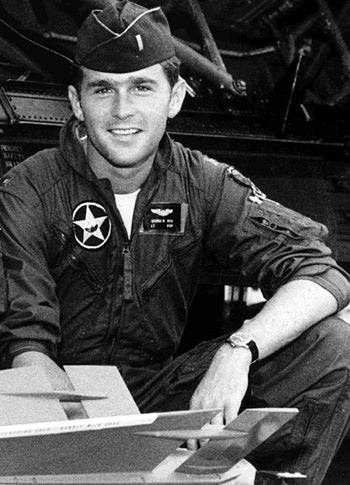 George W Bush was born in New Haven, Connecticut, where his father, George HW Bush was attending Yale University. The senior Bush soon moved his family to West Texas and entered the oil business. The younger Bush assumed the highest office in the land on January 20, 2001, becoming the second President who was the son of a former President.

During the early years in Texas, the senior Bush built his fortune, earning his first million dollars by the time he was forty. This allowed George W a relatively privileged youth. Eventually, he followed his father's steps to Yale in 1964. This was about the time the senior Bush became interested in politics.

Like his father and grandfather, Bush was initiated into the Skull and Bones society while attending Yale. In 1968, he received a commission with the Texas Air National Guard, flying F-102s out of Ellington Field. Bush was a "wild young man" and known to abuse alcohol. He met Laura Welch, a teacher and librarian, at a backyard barbecue. They married after a three month courtship. Bush credits Laura and her religious convictions for turning his life around. In 1986, he gave up alcohol entirely.

Bush ran and lost in a campaign for the US House of Representatives in 1978. He redirected his energies into the oil business. Bush started a number of successful oil exploration companies, and in 1988 moved his family to Washington DC to work on his father's Presidential campaign.

After the successful campaign, the Bushes returned to Texas, and George bought a share of the Texas Rangers Baseball franchise. Bush worked as the team's managing general partner and attended many games. He often chose to sit in the open stands with the regular fans. 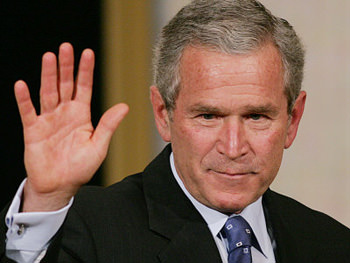 After working on his father's unsuccessful re election campaign, Bush announced his candidacy for Governor of Texas in the 1994 election. He based platform on welfare reform, tort reform, crime reduction and improving education. An important issue in the campaign was a bill allowing Texans to obtain permits to carry concealed weapons. Incumbent Ann Richards had vetoed the bill. Bush promised to sign it if elected, and he did, winning with 54% of the vote.

While still Governor, Bush announced his intention to run for President in 2000. He defeated a large field of contenders in the primaries, positioning himself as a compassionate conservative. The general election against Incumbent Vice President Al Gore was extremely close. The official results were delayed for a recount of Florida ballot. Eventually, Bush was declared the winner with 271 electoral votes to 266.

Bush began his presidency with an ambitious domestic agenda, but everything changed after the September 11 Terrorist Attacks. As President, Bush's compassion and decisive leadership were critical to the nation. President Bush sent the military into Iraq and Afghanistan as part of the "War on Terror". Bush's approval rating was very high during this period, but factors would erode this confidence over the ensuing years. 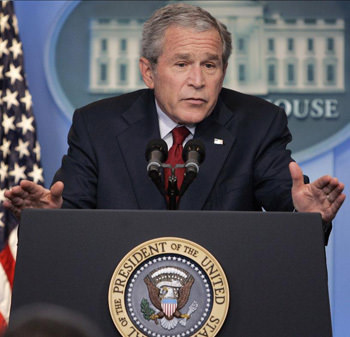 Aside from the War on Terror, Bush had early domestic success with the "No child Left Behind" initiative, but a darkening economy left an indelible stain on his legacy. The Dot Com Bubble and controversial tax cuts led into the Real Estate and Banking Bubbles. Bush left office after his second term, succeeded by Barack Obama.  See also: 9/11 Attack recordings.