The first US President born west of the Mississippi, Herbert Hoover was president during the earliest years of old time radio. 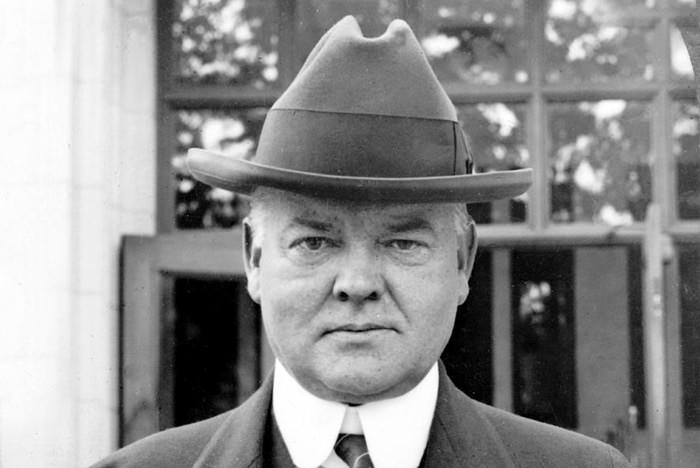 "Blessed are the young for they shall inherit the national debt."

"Words without actions are the assassins of idealism."

"America - a great social and economic experiment, noble in motive and far-reaching in purpose." 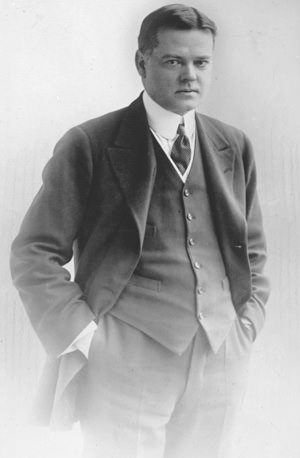 Herbert Hoover could easily be listed as one of the least effective American Presidents in the history of the office. He is also one of only two Presidents who gained the office without prior electoral experience or high military rank. The country was at the height of an economic bubble when he took office, and the Stock Market Crash of 1929 struck less than eight months later.

Hoover appeared to be unable to deal effectively with the Great depression which followed the crash. The American people perceived him as callous and unsympathetic while the Depression depended. Most of the recovery measures he put in place failed during his tenure, although many of them would be adopted by his successor and become a foundation for The New Deal. Ironically, it was humanitarian relief efforts which gave Hoover his start in politics.

Herbert Hoover was born into a family of Quakers in Iowa (the first President born West of the Mississippi) and brought up to value honesty, industriousness, and simplicity. Orphaned at the age of nine, an uncle in Oregon raised Hoover. He attended Quaker schools and was one of the first students to attend Stanford University. He graduated from Stanford with a degree in geology, and went on to enjoy a lucrative career as a mining engineer in the goldfields of Australia. He went on to develop mines in China, but not before marrying his university sweetheart, Lou Henry. By 1914, he had amassed a considerable personal fortune. 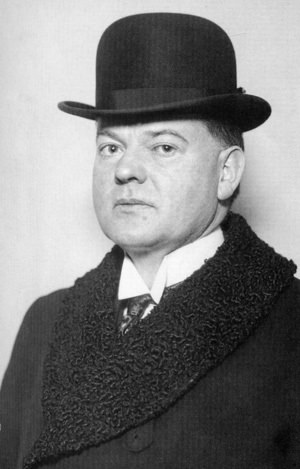 When European hostilities broke out at the start of WWI, Hoover worked for the repatriation of 120,000 Americans in Europe. He continued to provide relief to victims of the War, even conducting shuttle diplomacy across the North Sea for supply movement.

When the US entered the War, Woodrow Wilson appointed Hoover to hear the US Food Administration. Believing the "Food would win the War", Hoover avoided mandatory rationing at home, but was able to put programs in place that ensured there would be sufficient rations for the doughboys in the field.

After the War, Hoover again took up relief efforts in Europe. When Harding won the Presidency, Hoover became the Secretary of Commerce. The Commerce Department was only eight years old, and Hoover set about shaping the Department in his own image. His efforts were critical in creating the Radio Act of 1927, which helped to influence the scope of the new medium as the Golden Age of Radio was dawning.

When Hoover ran for the Presidency in 1929, in the public's eye the primary difference between the Commerce Secretary and his Democratic opponent was in their support of the Volstead Act. Democrat Alfred Smith was "wet", but also a Roman Catholic. Hoover called Prohibition a "Noble Experiment", implying that he expected an end sometime in the future. Hoover's popularity and divisions within the Democratic Party over religion were enough to carry the day.

The Depression overwhelmed Hoover's Presidency. "Hoover-villes" referred to the shanty towns and tent cities of the poor. His Quaker background gave the President a strong faith in the power of voluntarism, but the efforts never gained the ground they needed without government support. He ran for reelection in 1932 but met with a great deal of animosity from the American People. The Secret Service warned that there were plots to assassinate him during the campaign, and Roosevelt implied that Hoover was personally responsible for the Depression.

Although Hoover remained a scapegoat for the Depression after WWII, President Truman used him to help with relief efforts for war torn Germany. Hoover passed away in Oct, 1964. His was to be the third State Funeral in the space of twelve months, the others having been for John Kennedy and Douglas MacArthur. 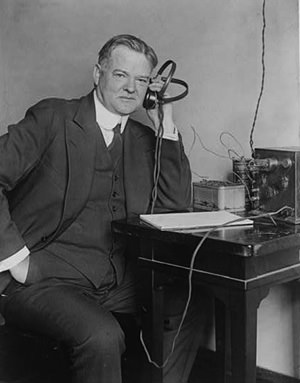 This collection includes all known sound clips of early speeches in which Hoover appeared on the radio.