Douglas MacArthur served as US General of the Army and field marshal to the Philippine Army. As Chief of Staff of the Army during the 1930s, he played a prominent role in the Pacific theater during WWII.

Choose your CD format
or order disks individually: Add to Cart Add to wishlist
Play a sample episode from October 19, 1944:

When it comes to great military tradition in the United States, I really doesn’t get much better than the name MacArthur. That is Arthur MacArthur, Jr. and Douglas MacArthur. They are the first father and son to both receive the Medal of Honor. 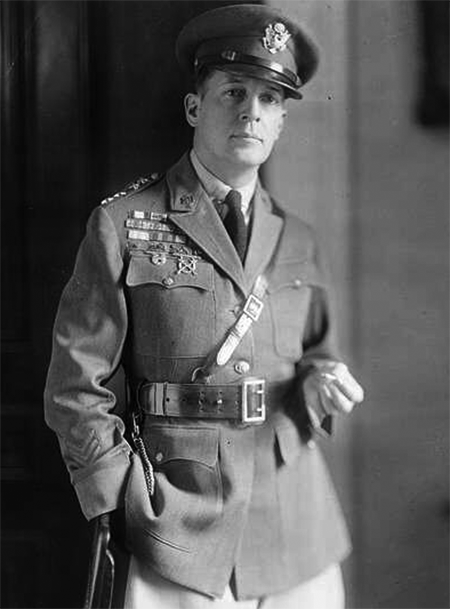 Douglas MacArthur was born a military brat in Arkansas in 1880 and excelling in his studies at both West Texas Military Academy and West Point where he was valedictorian of both graduating classes. Because of his reconnaissance mission he conducted in Veracruz in 1914, MacArthur earned the Medal of Honor. During World War I, MacArthur became chief of staff of the 42nd Rainbow Division and fought on the Western Front. MacArthur again, was nominated for the Medal of Honor, twice awarded the Distinguished Service Cross, and in total; seven times received the Silver Star.

After the Great War, as it was called in those days, MacArthur became the superintendent of the US Military Academy at West Point. By 1924, he was in the Philippines where he had quelled the Philippine Scout Mutiny. He later served on the court martial of Billy Mitchell, and was president of the American Olympic Committee of the 1928 Summer Olympics.

Because of this economic depression and veterans of the Great War promised bonuses in 1945, they were hard up for money, so in 1932 the Bonus Army converged onto Washington, DC demanding early payment of those bonuses. On July 28, 1932, Hoover ordered the campsites of the Bonus Marchers and their families cleared out. The chief of staff sent in the cavalry and drove the protesters out, burning the camp to the ground. This may have been what cost Hoover the election of 1932 and losing to Franklin D. Roosevelt.

In the summer of 1941, FDR had federalized the Philippine Army and had recalled MacArthur to active duty. But now he was a major general and made commander of the US Army Forces in the Far East.

After Pearl Harbor on December 7, 1941, which happened to be December 8, 1941 in the Philippines; General George C. Marshall had ordered MacArthur to execute what was known as Rainbow Five, the existing war plan. MacArthur refused and did nothing.

So now with the United States in the Second World War, President Roosevelt assembled a dream team if you will of great giants for the times. General Dwight D. Eisenhower would be in charge of the European Theater, General Douglas MacArthur would lead in the Pacific Theater, and General George C. Marshall was the Army Chief of Staff back in Washington, DC. On VJ Day in 1945, MacArthur was present on the USS Missouri when the Japanese surrendered. 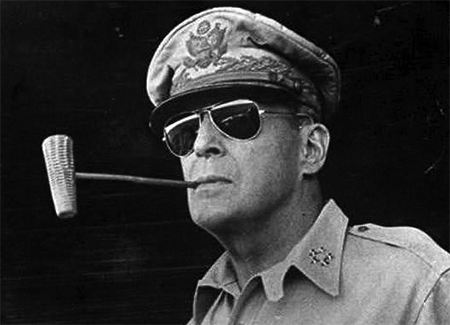 After the war, MacArthur would be named Supreme Commander for the Allied Powers in Japan. The General and his staff essentially rebuild Japan’s very way of life by eradicating Japan of militarism and ultra-nationalism. They would also promote political civil liberties as well as chart a new democratic form of government, which led Japan to become the one of the world’s leading industrial powers.

In 1946, MacArthur helped draft a new Constitution for Japan. What it did was it stripped the Emperor of military authority and could only act on the advice of his ministers. Article 9 of the constitution would outlaw belligerency as a means for state policy as well as the maintenance of a standing army. Socially, the new constitution would enfranchise women guaranteeing them fundamental human rights as well as outlawing discrimination. The powers of Parliament and the Cabinet would be strengthened as well as there would be a decentralization of the police and local government.

By 1949, General Omar Bradley had predicted that large scale amphibious operations will never occur again. In June 1950, the United Nations Command Force, headed by Douglas MacArthur was at war with North Korea. Then, in July 1950, MacArthur had planned such an exercise that Bradley had predicted would not happen. But the soldiers and marines who landed at Inchon, which is deep into North Korea were able to close North Korean air support making it able for the UNC to recapture Seoul and force the North Koreans to retreat. When he visited a battlefield to survey six T-24 tanks, there was shooting going on around MacArthur, but he was largely ignoring it; except when he noted that the North Korean marksmen were poorly trained.

After the Wake Island Conference with Harry Truman, things got worse. 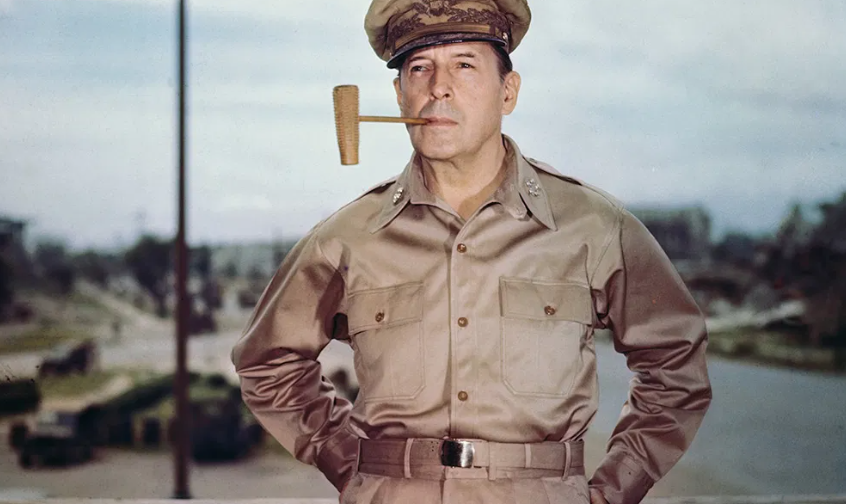 The Chinese had entered the war and whereas MacArthur said at the conference that the boys will be home by Christmas, well, that was when the Chinese entered the war and in President Truman’s blunt words, "kicked the living hell out of us." Truman felt that MacArthur was forgetting who the president of the United States was. After Truman consulted with General George C. Marshall and General Omar Bradley on what to do, Truman said, "Alright, Fire the son of a bitch."

MacArthur was relieved of his duties and came home to a hero’s welcome. President Truman was being highly criticized in Congress by Joseph McCarthy, William Jenner, and Richard Nixon for the decision. Even the President’s own mother in law asked her daughter what right her husband had to fire the best general this country ever had. Bess replied by saying that her husband was the president of the United States and if he wants to fire a general, he will.

After he was released of his command MacArthur addressed a Joint Session of Congress to which he declared that old soldiers never die, they just fade away. Douglas MacArthur loved out his remaining years by retiring with his wife to the Waldorf Towers penthouse. Remington Rand had elected MacArthur Chairman of the Board earning him a salary of $68,000.00 in addition to his $20,000.00 pay and allowance as a general in the Army. He would advise both Presidents John F. Kennedy and Lyndon B. Johnson on matters of war. During the Cuban Missile Crisis in 1962, MacArthur advised the president that the greatest weapon of war was blockade.

On April 5, 1964, General Douglas MacArthur died of biliary cirrhosis. Interestingly to know, but before his death on November 22, 1963, President Kennedy had authorized for MacArthur to have a state funeral. President Johnson had ordered that MacArthur be buried with all the honors a grateful nation can bestow on a departed hero. He is laid to rest in the rotunda of the Douglas MacArthur Memorial in Norfolk, Virginia.