Bob Dole was born in 1923 in Russell, Kansas residing at 1035 North Maple which would remain his official residence throughout his political career.  After graduating from Russell High School in 1941, Dole had enrolled at the University of Kansas where he had excelled as a star athlete playing for the basketball team, the track team, and the football team.  As an end position for the football team Dole would earn varsity letters in 1942 and 1944.  He would also pledge Kappa Sigma fraternity and in 1970 would be awarded the fraternity's Man of the Year.  World War II would interrupt Dole's collegiate career as he joined the United States Army.  After the war, Dole would attend the University of Arizona and Washburn University earning both his undergraduate and law degrees in 1952. 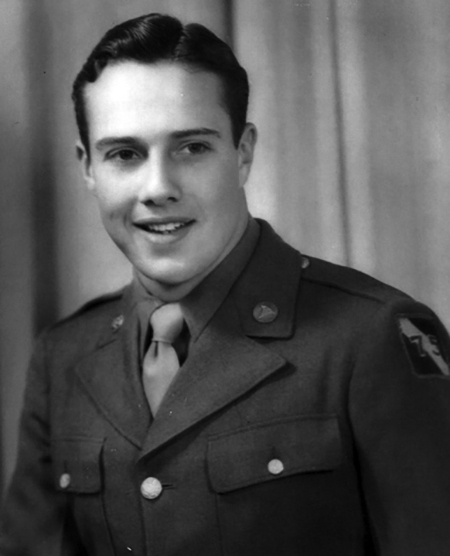 Dole had enlisted in the United States Army Enlisted Reserve Corps in 1942 and became a second lieutenant in the Army's 10th Mountain Division.  By April of 1945, Dole was engaged in combat near Castel d'Aiano, southwest of Bologna, Italy where he was seriously wounded by a German shell where he was struck in his upper back and his right arm.  His collarbone and part of his spine were shattered.  Dole would say of this experience, "I lay face down in the dirt.  I could not see or move my arms.  I thought they were missing."  Fellow soldiers would see the extent of Dole's injuries and felt that all they could do was give him the largest dose of morphine that they dared and then in his own blood, write an M on his forehead so that when he was found no one else would give him a second fatal dose.

Dole would be paralyzed from the neck down so that he could be transferred to a military hospital near Kansas.  He was expected to die after suffering from blood clots, life threatening infections, and a fever of over 109 degrees.  His body was rejecting the penicillin so he was given streptomycin, an experimental drug in the 1940s and overcame the infection.

Like anyone else who had sustained war injuries, Dole would be despondent by not accepting the fact that his life was going to be changed forever.  An orthopedist in Chicago, Dr. Hampar Kelikian who had worked with veterans returning from war had performed seven operations on Dole and free of charge.  In their first meeting, Dr. K., as Dole affectionately called him warned Dole that he would never fully recover which led to Dole's whole new outlook on life.  "Kelikian inspired me to focus on what I had left and what I could do with it, rather than complaining about what had been lost."

When Bob Dole first ran for political office it was for the Kansas House of Representatives in 1950.  During his two terms in the state legislature; Dole would serve on such committees as Assessment and Taxation, Gas and Oil, Military Affairs, and Soldiers Compensation.  He would become the County Attorney for Russell County in 1952.

By 1960, with both Senator John F. Kennedy and Vice President Richard M. Nixon, both World War II veterans themselves; Bob Dole felt it time to run for the US House of Representatives in Kansas' 6th Congressional District.  Because of the 1960 Census, Dole's seat was merged with the 2nd Congressional District forming a new 1st District.  Dole's time in the US House of Representatives would be from 1961 to 1969 with him supporting such progressive legislation as the Civil Rights Act of 1964, the Voting Rights Act of 1965, and the Civil Rights Act of 1968.

After eight years of John F. Kennedy and Lyndon B. Johnson; 1968 seemed like the year for a Richard Nixon comeback.  Bob Dole decided that it was time to move forward and run for a seat in the US Senate from Kansas.  In addition to 1968, Bob Dole would be re-elected in 1974, 1980, 1986, and 1992.  During his time in the Senate, it was observed that Dole's voting record was quite moderate.  He partnered with George McGovern to support legislation making Food Stamps more accessible so that by 1982, the New York Times referred to Bob Dole's voting record as "changing from hard-line conservative to mainstream Republicanism."  The year that he was to become the Republican Nominee for President, when there was the 1995-96 government shutdown, Bill Clinton said of his presumptive opponent that Bob Dole was a lawmaker who was working together with him in good faith to reopen the government. 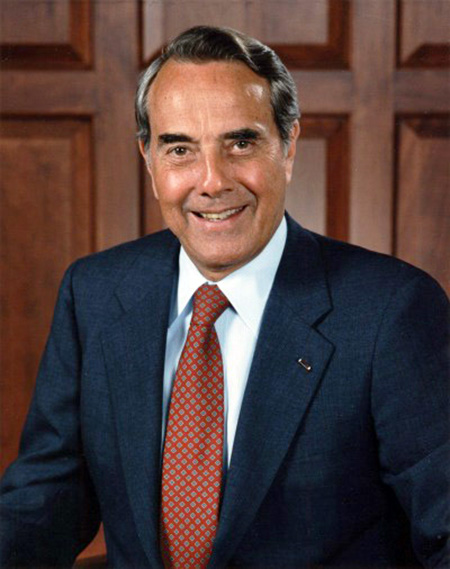 n the early 1970s, Dole was named Chairman of the Republican National Committee during the early days of the Watergate Scandal.  George HW Bush would succeed him in this position.  As the 1976 Presidential Election was going on, the incumbent Vice President, Nelson Rockefeller had announced in November 1975 that he was retiring from politics.  Gerald Ford would name Bob Dole his running - mate just before the start of the 1976 Republican National Convention in Kansas City.  During the first ever Vice Presidential Debate against Walter Mondale, Dole made the memorable statement, "I figured it up the other day: if we added up the killed and wounded in Democrat wars in this century, it would be about 1.6 million Americans - enough to fill the city of Detroit."  Gerald Ford and Bob Dole would lose the 1976 Presidential Election against Jimmy Carter and Walter Mondale; 297 Electoral Votes to 240 Electoral Votes.

Dole would run for President himself three times; 1980, where he finished behind Ronald Reagan, George HW Bush, and four others in Iowa and New Hampshire.  He only received 2.5 percent and 0.4 percent in those two contests and as a result, he formally withdrew from the Primary race in March 1980.  He was re-elected to his third term in the Senate that November.

In 1987, Bob Dole made his second attempt at the Republican Presidential Nomination in 1988.  At the announcement ceremony, Dole was presented with a cigar box with $7,000 in campaign donations by the VFW.  This was a throwback to the days when Dole collected donations for his medical expenses.  The Primary season started out strong for Bob Dole as he defeated Vice President George HW Bush in the Iowa Caucus.  A week later, Dole would lose to Bush in the New Hampshire Primary and it was reported that Dole lost his temper in an interview with Tom Brokaw citing that Bush should stop lying about Dole's record, particularly accusing Dole of straddling on taxes.  Even with the coveted endorsement of Senator Strom Thurmond in the South Carolina, Dole continued to lose primaries across the south and the Midwest.  This would lead to his withdrawal from the 1988 Presidential race.

In 1994, the Republican Party had taken control of both houses of Congress in the Midterm Elections.  This was the first time since Dwight Eisenhower was president in 1954 that the Republicans had total control of Congress.  This was due to the fallout of Bill Clinton's failed Health Care Reform Plan and the 1993 Tax Increase.  Bob Dole would become Senate Majority Leader for a second time and Newt Gingrich would become Speaker of the House.  One year before the 1996 Election both Dole and Gingrich led the Congress to pass a spending bill that the President vetoed; resulting in the federal government shutdown of 1995 and 1996.  Some would say that shutdown is what brought about the Monica Lewinsky Affair between Bill Clinton and White House intern Monica Lewinsky, which would lead to the 1998 Impeachment of Bill Clinton in the House of Representatives and the 1999 acquittal in the Senate.  Dole would meet with Vice President Al Gore and Representative Dick Armey on November 13, 1995, but they were able to reach an agreement.  Because he was wanting to be on the campaign trail for the Republican Nomination for president, by January 1996, Dole was more open to a compromise to end the shutdown.  He was opposed to other Republicans who wanted to continue until their demands were met.  Because they were potential rivals for the 1996 Republican Nomination for President both Dole and Gingrich developed a tense working relationship.  Just before his death in 1994, Richard Nixon warned Dole that if the economy is good you're not going to beat Clinton.

Early in the race, Dole was the front runner for the nomination among eight other candidates.  Bob Dole would finish in a second place showing in the New Hampshire Primary behind Pat Buchanan.  It would be said that Dole was on the ropes because he wasn't conservative enough. 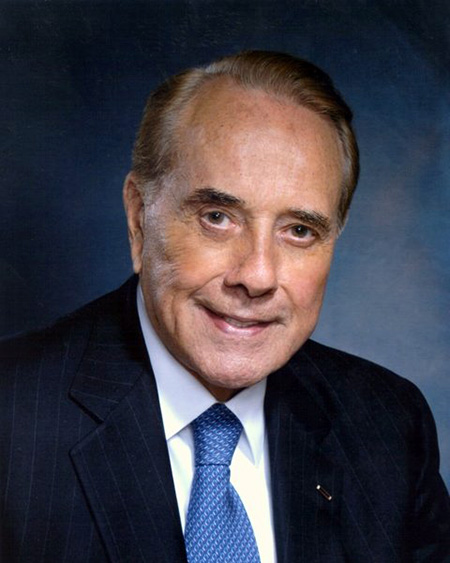 Eventually, Dole would win the nomination and at the time was the oldest first time candidate running for President at 73 years of age.  Joe Biden would beat that record in 2020 as he was a first time candidate for president at age 77 years.  John McCain was on 72 years old in 2008.  Dole would resign his Senate seat and his position as Senate Majority Leader on June 11, 1996 to focus his time on the campaign.  In his Farewell to the Senate Speech Dole declared, "I have nowhere to go but the White Housr or home."  The initial draft of Dole's Acceptance Speech came off as being too hardline.  It would be revised to include themes of honor, decency, and some straight talk.  The take away line of that speech was a message to the Republicans elected to Congress in 1994, "In politics honorable compromise is no sin, it is what protects us from absolutism and intolerance."

One of the firsts in this campaign was the Dole-Kemp campaign website which is still active as of 2021.  This site would beat out the Clinton-Gore website which was designed by Arizona State students Rob Kubasko and Vince Salvato.  In the end though, Bob Dole and Jack Kemp would lose the Election with 159 Electoral Votes to Bill Clinton and Al Gore's 379 Electoral Votes.  Bob Dole would be the last presidential candidate to serve in World War II.

Bob Dole could show that he could lose graciously and Bill Clinton proved that he could win graciously.  In January 1997, Dole was awarded the Presidential Medal of Freedom.  He would sign on to do commercials for Viagra, Dunkin' Donuts, Visa, and Pepsi Cola.  He would do commentary for Larry King Live, was a guest on The Daily Show with Jon Stewart, and along with Former President Bill Clinton, Dole would do Point by Point on 60 Minutes.  Collegiate Institutions would be named in his honor and Dole would get involved in many worthy causes.

Politically, Bob Dole has endorsed candidates for elected office.  He supported Jeb Bush in 2016 and then Donald Trump after the Primaries.  On his 98th birthday in July 2021 USA Today interviewed Bob Dole and he said of Donald Trump that he was "Trumped Out."

Like any advance aged human being, Bob Dole has had his share of health issues since leaving politics.  Sadly, in February 2021, Bob Dole was diagnosed with stage IV lung cancer.  To treat the cancer, Dole is receiving immunotherapy.  Mr Dole passed away on December 5, 2021 at the age of 98.