Relive the legacy of John Sidney McCain III through audio; A US Navy Officer who was captured in Vietnam, McCain later became US Senator for Arizona from 1987-2018 and ran for national office.

Born into a family of Naval greatness, the United States Navy was a natural career path for John S. McCain, III.  As a student of the United States Naval Academy, McCain excelled in classes that he enjoyed like literature and history and studied just enough to get by in subjects that he was not interested in, like mathematics.  Because of his academic record his standing of his rank at the Navel Academy was 894 out of 899.  Socially, McCain was a friend to those who were targets of bullies and was a lightweight boxer.

When he graduated and started his Naval training John McCain was commissioned as an ensign.  He would spend the next two and a half years in Pensacola training to be a Naval aviator.   He would earn a reputation for being a partier.  In 1960, McCain completed training and became a Naval pilot of ground attack aircraft being assigned to A-1 Skyraider squadrons aboard the USS Intrepid and the USS Enterprise. 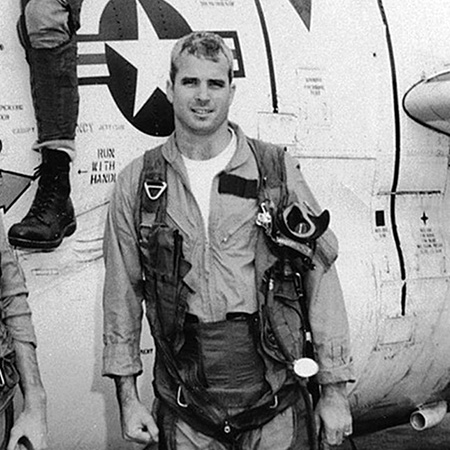 On October 26, 1967 while flying his 23rd Bombing mission over North Vietnam, his A-4E Skyhawk was shot down over Hanoi.  After parachuting into Truc Bach Lake and nearly drowning in addition to breaking both arms and a leg after ejecting the aircraft he was pulled ashore by some North Vietnamese.  Once on land, his shoulder was crushed by a riffle butt and he was also bayoneted.  He was then taking to Hoa Lo Prison, affectionately known as the Hanoi Hilton where he would remain imprisoned until 1973.  Initially, the North Vietnamese refused to treat his injuries but when they found out that his father was a Navy admiral he was then given medical care.  By December 1967, after spending six weeks in the hospital, McCain was transferred to a different camp in the outskirts of Hanoi.  He was placed in a cell with two other American POWs who did not expect him to live.  Then, in March 1968, McCain was placed in solitary confinement where he would remain for the next two years.  Because his father was named commander of all US forces in the Vietnam Theater, McCain was offered early release from prison to use him for merciful propaganda and to prove that elite risoners got preferential treatment over others.  Per the Military Code of Conduct for POWs, Article III states, "I will accept neither parole nor special favors from the enemy." John McCain would refuse repatriation unless the North Vietnamese agreed to release every man taken in before him.  By August 1968, McCain was subjected to severe torture, including being beaten every two hours.  It got so bad for him that he thought about suicide.  He would eventually make his anti-US propaganda confession to which McCain would later say, "I had learned what we all learned over there: every man has his breaking point.  I had reached mine."  McCain would consider this to be dishonorable.  On March 14, 1973, John McCain, along with 108 other POWs were released from prison.  Because of his wartime injuries, McCain would never again be able to raise his arms above his head.

After returning to the United States, John McCain became a Military Aid to a young Senator from Delaware, Joe Biden.  They would become fast friends to where their families had barbecues together.  Biden spoke of their friendship when on the View after McCain was diagnosed with brain cancer.  When McCain died, Joe Biden said at his memorial service that he was a Democrat and he loved John McCain.  McCain would develop an interest in politics and decided to run for the vacant Arizona 1st Congressional District in 1982.  Because of his not being from Arizona, originally McCain was accused like Bobby Kennedy was in New York in 1964 of being a "carpetbagger".  When a voter charged McCain with that accusation he responded by saying, "Listen pal.  I spent 22 years in the Navy.  My father was in the Navy.  My grandfather was in the Navy.  We in the military service tend to move a lot.  We have to live in all parts of the country, all parts of the world.  I wish I could have had the luxury, like you, of growing up and living and spending my entire life in a nice place like the First District of Arizona, but I was doing other things.  As a matter of fact, when I think about it now,  the place I lived longest in my life was Hanoi."

McCain would be elected to that seat in the 1982 Midterm Election, taking office in 1983.  He was elected to lead the freshman Republican class in the House of Representatives.  He would then be assigned to serve on the Committee of Interior Affairs.

In the beginning, McCain took a more hard conservative stand on issues; siding with Ronald Reagan most of the time.  McCain opposed the creation of a Martin Luther King holiday.  In 2008, McCain would say if that vote, "I was wrong and eventually realized that, in time to give full support for a state holiday in Arizona."  In addition, McCain supported Reaganomics, Indian Affairs bills, and most of the Reagan administration's foreign policy like the hardline against the Soviet Union and backing the Contras in Nicaragua.  He did disagree with the President on pulling Marines out of Beirut too late causing the deaths of 241 Marines in the 1983 Beirut barracks Bombing. 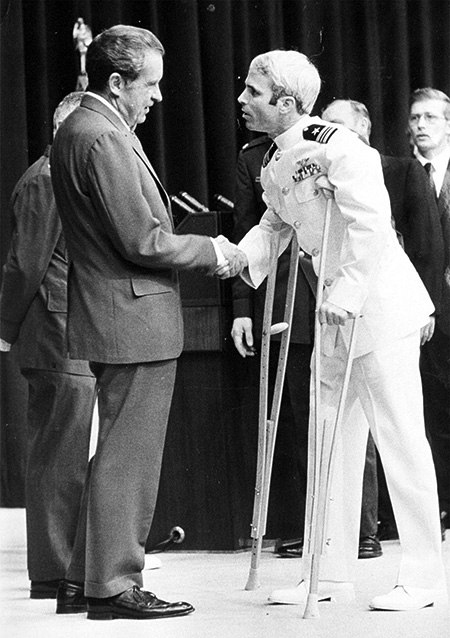 In 1986, conservative icon, Barry Goldwater had decided to retire from the US Senate.  McCain would run for the seat defeating Richard Kimball by 20 points in the General Election.  He would support the Civil Rights Authorization Act of 1987 and also voting to override Regan's veto.  Committee assignments included the Armed Services Committee, the Commerce Committee, and the Indian Affairs Committee.  As a lifelong gambler, McCain was one of the main authors of the 1988 Indian Gaming Regulatory Act.  By 1988, McCain was a speaker at the 1988 Republican National Convention where he was considered a possible vice presidential running-mate with George HW Bush.  Other candidates included such names as Bob Dole, Jack Kemp, Howard Baker, and Elizabeth Dole.  In the end, Vice President Bush would pick Indiana Senator Dan Quayle.

McCain was not without scandal as he was a member of the Keating Five.  This was a group of five United States Senators who had received contributions from Charles Keating as well as his associates at Lincoln Savings and Loan.  McCain had received $12,000.00 in lawful political contributions along with trips on Keating jets.  McCain would pay this back in 1989.  McCain would be cleared by the Senate Ethics Committee for any wrongdoing.  This would not be an issue for McCain in his 1992 re-election bid as he won with 56 percent of the vote.

By the 1990s McCain would earn the reputation of being a maverick by taking pride in challenging Party leadership and the establishment forces.  Along with Senator John Kerry of Massachusetts, a fellow Vietnam War veteran, McCain would be a member of the Senate Select Committee on POW/MIA Affairs.  McCain investigated the issue of POW/MIAs to determine the fate of US servicemen missing in action during the Vietnam War.  The final report stated that there was no compelling evidence that proves that any American remains alive in captivity in Southeast Asia.  Because of the efforts of John McCain, the United States would normalize diplomatic relations with Vietnam by 1995.  He would receive heat in 1993 and 1994 when McCain voted to confirm President Bill Clinton's Supreme Court nominees; Ruth Bater Ginsburg and Stephen Breyer.  McCain defended his votes by saying, "Under our Constitution, it is the President's call to make."  Earlier, under Ronald Reagan, McCain had voted to confirm Robert Bork and under George HW Bush, Clarence Thomas.

In 1994, perhaps the most signature issue for John McCain was Campaign Finance Reform.  What he saw in politics at this time was a corrupting influence of large political contributions.  He cited corporations, labor unions, and wealthy individuals for this problem.  Along with Senator Russ Feingold of Wisconsin, McCain-Feingold would try to put limits on "soft money".  The original McCain-Feingold Act was filibustered and never came to a vote.

On September 27, 1999, John McCain announced his candidacy for the Republican nomination for President of the United States in 2000.  In his Announcement Speech, McCain said that he was "staging a fight to take our government back from the power brokers and special interests, and return it to the people and the noble cause of freedom it was created to serve."  After defeating front runner, Texas Governor George W. Bush in Iowa and New Hampshire in the Primary season, it was not enough to reach the required number of delegates to get the nomination.  McCain would end his campaign on March 9, 2000 and endorse George W. Bush two months later.

On April 25, 2007, John McCain announced his candidacy for the Republican nomination for President in 2008.  This time he would win the nomination defeating candidates like Governor Mitt Romney of Massachusetts and Congressman Ron Paul of Texas.  He would then make history by naming Alaska Governor Sarah Palin as his running-mate.  She would be the second woman, Geraldine Ferraro before her in 1984 and Kamala Harris after her in 2020.

The unfortunate part of this story for McCain is that he was running to succeed an incumbent Republican President leading the efforts of trying to stop the financial meltdown of the American economy just a month before the General Election.  John McCain and Sarah Palin would lose to Barack Obama and Joe Biden with 365 Electoral Votes to 173 Electoral Votes. 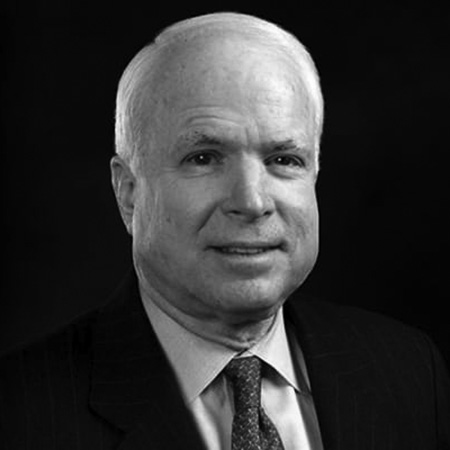 By the time of the 2016 Presidential Election, John McCain would get press when Donald Trump, a candidate for the Republican nomination for President was asked about John McCain at an event in Iowa.  Trump was asked if he thought John McCain was a war hero to which Trump replied by saying I like war heroes who weren't captured.  This would be the start of a feud that would last for the rest of John McCain's life.  Most notably was the famous thumbs down by John McCain in the Senate Chamber in July 2017 when McCain voted no on repealing the Affordable Care Act of 2010.

On July 19, 2017, it was confirmed by doctors that Senator John McCain had been diagnosed with glioblastoma, known as a very aggressive brain tumor.  McCain was given 14 months to live.  It was around this time that Former Vice President Joe Biden had written a book chronicling his son, Beau Biden's battle with this disease titled, PROMISE ME DAD.  Meghan McCain was hosting the View in December 2017 when Biden was a guest on the show.  The Vice President felt compelled to comfort his longtime friend's daughter on national television by telling stories about Beau and her father.  It was also in December 2017 that John McCain would no longer be voting in the Senate as he was in Arizona undergoing treatment.

Just five days before his 82nd birthday, the McCain family announced that the Senator would no longer be receiving treatment for the cancer.  He passed away on August 25, 2018 at his home in Cornville, Arizona.  He was survived by his wife, Cindy McCain, his children: Douglas, Andrew, Sidney, Meghan, Jack, James, and Bridget, his mother, Roberta, (1912 - 2020), and siblings: Jean, (1934 - 2019) and Joe.

The funeral for John McCain was held over a period of five days, starting on August 28, 2018; his 82nd birthday.  Eulogists over this period were Joe Biden, Larry Fitzgerald, Joseph Lieberman, Henry Kissinger, Meghan McCain, George W. Bush, and Barack Obama.  In accordance with his wishes, Donald Trump and Sarah Palin did not attend the funeral.  The New York Times would call John McCain's funeral the biggest meeting of anti-Trump figures during his presidency.