The Forty-ninth State is "the Last Frontier" and is legendary for its wealth, ruggedness, extreme weather, and most of all for its vastness.

Choose your CD format
or order disks individually: Add to Cart Add to wishlist
Play a sample episode from December 06, 1953:

"Stroke of Fate: Our Neighbors in Alaska" 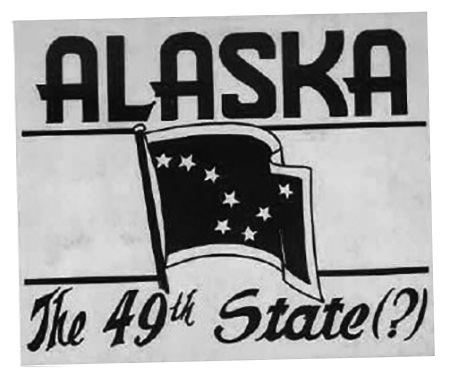 The two places in the United States which actually saw enemy action during the Second World War were not admitted to the Union until 1959. Of the last two states, the Fiftieth seems to have a stronger hold on our collective imagination than the Forty-ninth. Hawaii has sugary white beaches, pretty girls in bikinis, bronzed-gods riding surfboards, and palm trees. Alaska, well, doesn't.

It takes a hardy soul to leave the Lower Forty-eight and venture to Alaska, but with hard work, good planning, and more than a little luck, countless fortunes have been made in Alaska, but there is no getting around the fact that someone who makes their fortune in Alaska is more likely to vacation in Hawaii than the other way around.

Alaska is huge. More than twice the size of Texas, you could fit three Californias inside Alaska, twelve New York States, or simply the area of the 22 smallest states combined. If drawn to scale, a map of Alaska laid over a map of the contiguous States would stretch from coast to coast. However, if Manhattan had the same population density as Alaska there would only be 28 people on the island.

One of the most attractive elements of Alaska is that it is a place where the only thing standing between you and your fortune is mother nature. That far north, it is not surprising that Alaska holds the coldest spot in the country, but it's not all about snow and ice. Although Alaska's "farm-belt", the Matanuska Valley has a relatively short growing season of 100 days or less, the days are so long that vegetables grow incredibly fast and large, with hundred-pound pumpkins and forty pound cabbages being far from uncommon. It was not vegetables which brought adventurers to the Last Frontier, however. 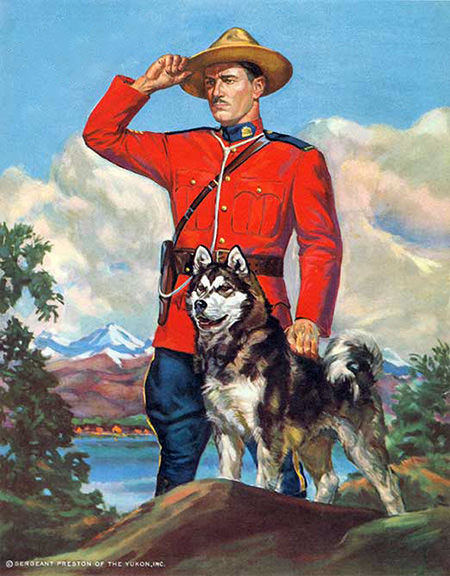 Some of Alaska's First Peoples were thought to have crossed the Bering Land Bridge during the last ice age, although some tribes returned to Alaska after venturing further into North America. At its narrowest point, the Bering Strait between Alaska and Russia is only 55 miles wide. Russian sailors are thought to have been storm-driven to Alaskan shores in the middle of the 1600s, and around 1741, Vitus Bering, a Danish captain in Peter the Great's navy led an expedition that returned to Moscow with incomparable sea otter and seal furs. Spain attempted to claim parts of Alaska as an extension of their colonies on the California coast in the later decades of the eighteenth century with little success. The Empire of Russia, fearing the loss of their North American colony to the British in an upcoming war, offered the whole thing to the United States Government for around $0.02 per acre, a land deal easily comparable to the Louisiana Purchase. The historical supposition program, Stroke of Fate, made a very good dramatization of the purchase, and then went on to speculate what it would be like if Russia became a neighbor to Canada and the United States in "Russian America".

The American public was less enthused about the deal, at least, until the discovery of gold in the Yukon River Valley around the turn of the Twentieth Century. Prospectors arrived from around the world, expecting to be able to find nuggets laying loose on the ground. What they found was that the prime spots had already been claimed, and many of them were forced to face the Alaskan winter with only the provisions they could carry. The romance of the Klondike Gold Rush days is captured in Challenge of the Yukon and The Screen Guild Theatre's presentation of "Belle of the Yukon".

While most who came seeking gold eventually left with only stories to show for their effort, a hardy few stayed, reveling in the freedom of the great wilderness, and seeking their fortune from the other resources there. Spawning salmon invaded local streams each year, and fisherman and canners moved in to take advantage of the bounty. Much of the Alaskan interior is only accessible by aircraft, and the exploits of Alaskan bush pilots is the stuff of legend. DuPont's Cavalcade of America dramatized the importance of bush pilots to the families living in "the Last Frontier" on the 1946 broadcast of "Alaskan Bush Pilot". During the Lend-Lease campaign before WWII, pilots would ferry American warplanes to Fairbanks and eventually to Nome where they would be turned over to Russian pilots who would then fly them west across Siberia to fight the Germans. The importance of aviation in Alaska is further showcased in some episodes of Hop Harrigan. 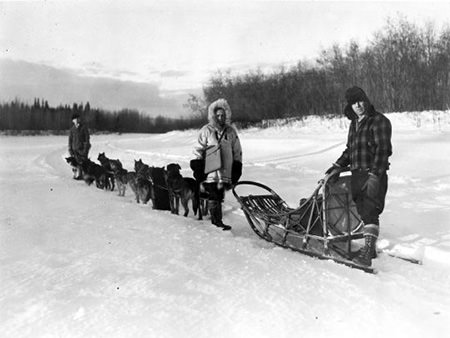 For many decades, the only reliable overland connection between Alaska and the Lower 48 was via dogsled. Although discussion of a road across British Columbia had been discussed since the early Twenties, no definitive action was taken until after the attack on Pearl Harbor. With Japan threatening Canada's West coast, approval to begin construction on the ALCAN Highway was given and construction officially began on March 8, 1942. More than 10,000 men assigned to the Army Corp of Engineers, including three newly formed "Negro regiments", completed the route by November. Parts of the route became nearly impassable during the summer months as the permafrost melted, turning the Highway into a large mud hole. The route has only recently been completely paved. The construction was completed in time for the Japanese invasion of Kiska and Attu Islands. Considered "the forgotten battle", the islands were occupied mostly to distract attention from the Japanese attack on Midway. Although only a small part of a greater operation, fighting was especially bitter in the storm-swept islands.

The military importance of Alaska is demonstrated in part by the good will poured over the air to our troops in "the frozen North" from programs like Christmas Eve at the Front, Christmas Reunion, Cavalcade of America 's "Alaska Under Arms", and The New National Guard Show's "Alaskan Adventure". There were reports of suspicious characters being rounded up by the military in Alaska during the December 7, 1941, broadcast of The Great Gildersleeve.

Alaska's remoteness contributes to its appeal to sportsmen and vacationers. That is the part the Fibber was bragging about on the September 30, 1941, broadcast of Fibber McGee and Molly (the same episode where they said goodbye to Gildersleeve). That same remoteness makes the "Last Frontier" a difficult place to attract settlers, but Kingfish may have discovered a way on Amos 'n' Andy, if only he can get Amos to fall for his scheme. The long reach of America's leading investigative service even reaches into this remoteness, as it did during territorial days on This is Your FBI episode "Snow Screen".