To Impeach a President (Bill Clinton)

Whenever a sitting President does something that his opposition does not like, there are calls for Impeachment. The case of President Clinton's Impeachment proceedings can be instructive. 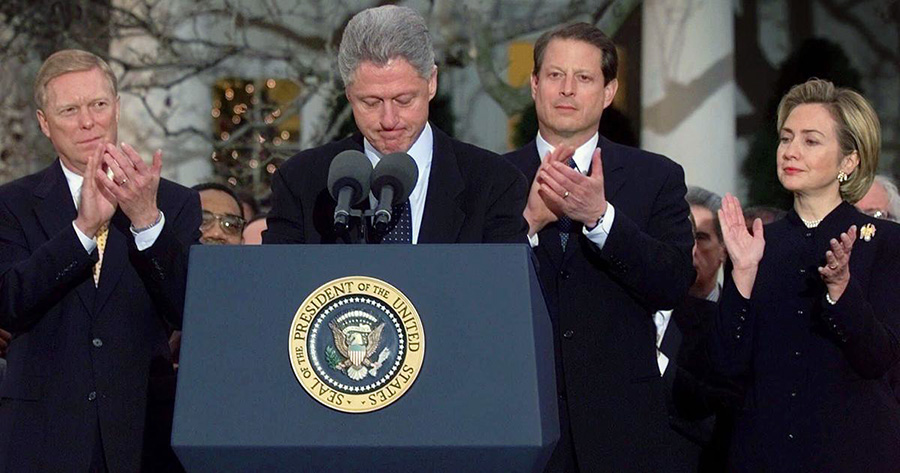 Until the 1970s and the Watergate Scandal, the term "impeachment" was rarely heard outside social studies classrooms. There had only been one instance of a President being impeached in the then nearly 200-year history of the Republic. In the end, Nixon resigned the Presidency to avoid the scandal of an impeachment proceeding, but since he left office, it seems as though whenever a sitting President does something that the opposition party does not like, someone will begin screaming for an impeachment trial. 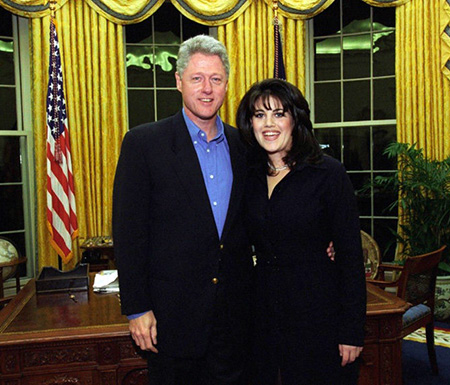 Section Four of Article Two of the United States Constitution states that "The President, Vice President and all civil Officers of the United States, shall be removed from Office on Impeachment for, and Conviction of, Treason, Bribery, or other high Crimes and Misdemeanors." The phrase "high Crimes and Misdemeanors" sounds a little vague to the modern ear, but it essentially means that if you are going to try and remove a President from office, it had better be for something really, really serious.

In December 1998, Bill Clinton became just the second President to have been impeached (Andrew Johnson was the first in 1868), and n at least one interpretation of the events, the charges were rather frivolous. On the surface, Clinton cheated on his wife with a 22-year-old White House Intern and then lied about it. The President's alleged sexual peccadillos would probably never have come to light if not for the fact that Independent Counsel Ken Starr was already investigating the President and his wife for improprieties concerning the Whitewater Real Estate Scandal.

While serving as Arkansas Attorney General, the Clinton's were looking to supplement their incomes to support a run for Governor. Their friend, Jim McDougal, suggested that they join him and his wife, Susan, in a land deal involving selling lots for exclusive vacation homes. However, before the deal was completed, the economy turned, and the land lost its high valuation. Jim asked the Clintons' for more money to keep the deal from foundering, but he later had trouble accounting for the infusion of funds.

The McDougal's were investigated and prosecuted for financial improprieties. These same investigations tended to show that the Clintons heeded some bad advice but were not directly involved in any wrongdoing. However, as Clinton's political career grew, suspicions surrounding Whitewater never went away, and Independent Counsel Starr took up the investigation in August 1994. Four years of investigation still could not uncover any additional dirt from the real estate scandal but did bring to light a sexual harassment case where former Arkansas state employee Paula Jones claimed to have been propositioned by then-Governor Clinton.

The Clinton v. Jones case was a landmark because it established that a sitting President was not immune from prosecution in civil cases for acts committed before taking office and not related to the office. The matter was eventually resolved out of court for a large cash settlement paid to Ms. Jones with no apology or admission of guilt from the President. However, while being deposed in the case, President Clinton denied the affair with Ms. Lewinsky under oath, which, to Starr, constituted perjury and possible obstruction of justice. 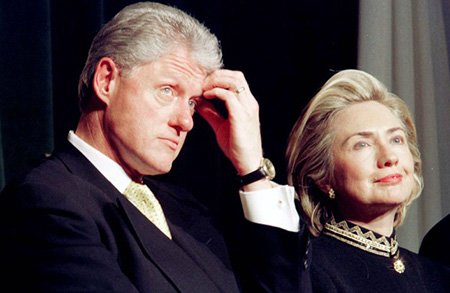 There was recorded evidence that the affair had, in fact, taken place. Clinton claimed that his denial was based on misunderstanding what the questioner defined as sexual relations. The situation was sufficiently murky that the President's opposition in Congress was able to proceed with impeachment hearings. During the 1998 Midterm Elections, the Republicans were able to maintain a majority in the House of Representatives but were losing ground even though they had expected to pick up seats in the wake of the Clinton Scandal. The House, voting mostly along party lines (31 Democrats did "cross the aisle" to vote for Impeachment), sent two Articles of Impeachment to the Senate on December 19, 1998.

The Senate Hearings began on January 17, 1999, with Chief Justice of the United States, William Rehnquist presiding. After the case had been presented, the Senate voted to hold closed-door deliberations before reaching a verdict on February 9 and ended those deliberations on February 12 to vote the results. A super-majority of two-thirds of the Senate or 67 votes to convict would have been required to remove the President from office. The perjury charge got 45 votes to convict and on the obstruction of justice, the vote was just 50-50. President Clinton remained in office for the rest of his second term.

The Congress used the Clinton Impeachment proceedings as a model for the impeachment of Donald Trump in 2019. Ken Starr was part of the legal team advising President Trump.