Over the years, there were 900+ episodes of Lux Radio Theatre and we've handpicked the best for this original collection!

This collection contains the "best of" episodes from the extensive Lux Radio Theater Collection.

The importance of the movies from Hollywood's classic period to developing American Culture cannot be understated. Literature and, to a lesser extent theater, were the cultural touchstones of Europe and Great Britain, preserving and spreading stories which defined entire peoples. The ascendance of American culture occurred as the technological, artistic, and financial means to create cinema were being developed, so it is natural that movies became our literature.

Although there were certainly culturally important silent films, scholars define Hollywood's Golden Age as running from the beginning of the 'talkies' through the late Sixties. Great films have been made since that time, but the Sixties marked the rise of Television's commercial and cultural importance, displacing both movies and classic radio.

Although movies became an important storytelling medium, the nature of the film industry was such that most people only had one chance to see a film. A few profitable pictures might go through a second release, but for the most part, if you didn't see a film when it to the local movie palace you missed it. After all, there were only so many screens, and Hollywood was churning out dozens of new movies each year.  Unlike a book, there was no local library where you could rewatch a film like you reread a favorite book, and there were no Saturday afternoon reruns on TV for most of the Golden Age. One of the few ways to enjoy a movie after the end of its release was to listen to an adaptation on radio programs like Lux Radio Theatre. 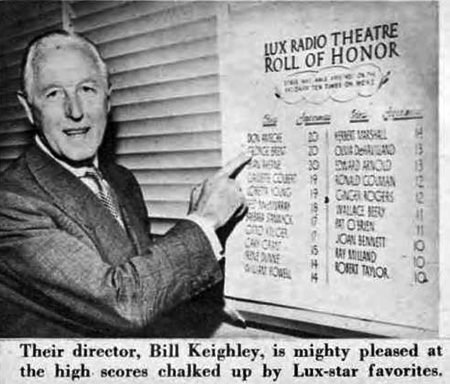 The Lever Bros. Company, makers of Lux Beauty Soap, had built its fortune by understanding the importance of brand recognition, marketing, and advertising. Their leading products were Lifebouy, Vim, and Lux, and there was an emphasis on making their flagship brand, Lux, into a luxury item. While their competitors were making inroads with the newly developing daytime serial dramas, Lever Bros chose to court a primetime audience for Lux. When Lux Radio Theatre first came to the air in 1934, the programs turned to Broadway productions for stories and guest stars. After the 1935-36 season, the show followed the rest of the radio industry in its exodus from New York to Hollywood and began using movies as source material.

A step which cemented Lux's reputation in Hollywood was hiring the great Cecil B. DeMille as host of the program. DeMille was one of the greatest director/producers of all time, as well as one of the pioneers who brought the film industry to Los Angeles. The biggest reason for the popularity of Radio Theatre besides the film-based stories was the fact that the show tried to use the original Stars from the pictures whenever possible. Appearing on Lux was a very different and usually enjoyable experience for the Stars, especially compared to the rigors of working on a movie set.

Lux had generally more rehearsals during the week than most other radio programs since its Stars were movie actors who were used to having multiple takes if a scene did not go well. The broadcast was live before a studio audience with a full orchestra providing transition music. Host DeMille spoke in praise of Lux Soap between the acts and would help the Stars plug their latest film projects at the end of the show. Some of the film actors developed considerable stage fright before the studio microphones, it was generally a relaxed and enjoyable experience for the movie Stars, made more so by the $5000 appearance fee they collected.

Over the years, there were 961 episodes of Lux Radio Theatre.  Some of the pictures adapted appeared in more than one adaptation. Other programs on radio borrowed Lux's movie adaptation format, but none equaled the glamor associated with the original. The program was a popular rebroadcast on AFRS as Hollywood Radio Theatre. This collection includes adaptations of classic films, including: