Choose your CD format
or order disks individually: Add to Cart Add to wishlist
Play a sample episode from June 16, 1950: 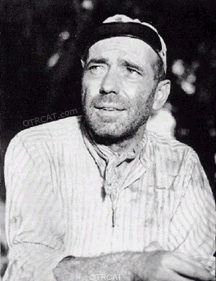 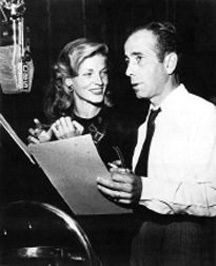 There have been other Hollywood "Power Couples", but very few held as much sway as Humphrey Bogart and Lauren Bacall.

The first time the duo worked together was in Howard Hawk's film, To Have and To Have Not. Loosely based on the Hemingway novel, it's the story of an American drifter living in the Caribbean, the kind of person that trouble often finds, who becomes involved in intrigue as well as with a sultry young woman who seems so wrong but ends up so right for him.

Bogey and Bacall had a scandalous May- December romance that began during the film and blossomed into one of Hollywood's strongest marriages. Along with their movie projects, they came up with the radio treasure, Bold Venture. It was a formula that had worked very well for other movie couples, like Ronald and Benita Colman in Halls of Ivy.

The characters and situations of Bold Venture were similar to ones which had worked in Bogart films before, especially "To Have and Have Not." Slade Shannon is an amalgam of Bogey characters,

owner of a small hotel a la Rick in Casablanca, and a charter boat operator in the Caribbean a la To Have and Have Not and Key Largo. Playing Sailor Duvall on the radio, Lauren Bacall is just as sultry and alluring as she was on screen. 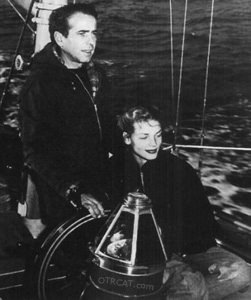 The show's producer, Frederick Ziv, won a bidding war to get the show, and he dived into the collaboration with the big stars with gusto.  He brought in such writing talent as Henry Hayward, who would later work on I Was a Communist For the FBI as well as the famed writing team of David Friedkin and Mort Fine, who had been part of the team on the great show Suspense and who would later produce I Spy.  Famed composer David Rose was responsible for the music.

To add some interesting context, production of this series straddled either side of the filming of the classic film African Queen.

Legend has it that the Bogarts used the proceeds from Bold Venture to fill their son Stephen's trust fund. However, money was more abundant in film, and whatever the couple's various motivational factors, they ultimately weren't interested, long-term, in the series.  Naturally, Ziv wanted them on until infinity, but they jumped ship after a season-and-a-half, with Bogey being the catalyst.  "I got tired of it," he'd later say.  "I never listened to it, but Betty did.  She liked to hear her voice."  We appreciate the honesty--it would've been easy for him to blame his 1952 Oscar for Best Actor (African Queen) and the myriad film roles that poured in as a result.  Whatever the case, the show was gone too soon.

Today,this radio adventure lives on as a cult classic.Pour another finger of rum into your Cuba Libre', sit under the slowly turning ceiling fan, and look out to sea while we wait for Bogey's boat, The Bold Venture.