Claiming that he was never really interested in becoming an actor, with his natural good looks and hard work ethic, Burt Lancaster was destined to become one of the screen's most popular leading men. His iconic role was as First Sergeant Milton Warden in From Here to Eternity.

Choose your CD format
or order disks individually: Add to Cart Add to wishlist
Play a sample episode from June 04, 1949: 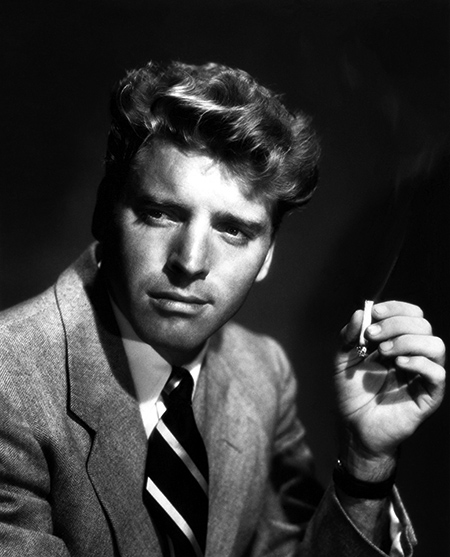 A common theme when studying the lives of Hollywood Stars is how their desire to become an actor drove them to work hard to achieve their goals. In contrast, one of the biggest stars of them all, Burt Lancaster, never wanted to be an actor. However, this does not mean that he did not work hard at learning and perfecting his craft.

Lancaster was the scion of Irish Protestant immigrants and born East Harlem in 1913. Young Burt grew up on the streets, but found a sense of discipline while attending DeWitt Clinton High School. Here he developed an interest in gymnastics and athletics, becoming enough of a basketball star to be offered an athletic scholarship to New York University. However, before his high school graduation, Burt lost his mother to a cerebral hemorrhage, and he subsequently dropped out of the University.

At age 19, he began performing with his childhood friend Nick Cravat in local theater productions and they formed the acrobatic duo "Lang and Cravat." They joined the Kay Brothers Circus and were doing quite well until Burt injured his hand in 1939 and had to drop out of the act.

He found work at Marshall Fields as a salesman and worked as a singing waiter until he was drafted in 1942. He was assigned to the 21st Special Services Division helping to improve troop morale in USO shows in Italy. Just before his discharge, he was on leave in New York, and went to visit a pretty girl he had met, Norma Anderson, at the office where she worked. The office belonged to a theatrical producer, and one of the assistants talked Burt into auditioning. Norma would eventually become the second Mrs. Burt Lancaster, and even though Burt was less enthused about acting than he was about Norma, won a part in A Sound of Hunting.

The show only ran for three weeks, but one of the people who saw it was Hollywood Agent Harold Hecht, who was able to get Lancaster his first movie role in The Killers (1946). Lancaster would go on to star in a series of dramas, thrillers and swashbucklers. Along Hecht, Burt was one of the first Hollywood actors to form his own production company to gain greater creative control over his work. Burt wanted to avoid the "beefcake" roles that the studio system would have forced on him. He probably had no idea that Hecht-Lancaster would be one of the nails in the studio system's coffin. One of their earliest production, The Crimson Pirate (1948), featured the acrobatic talents of Burt's childhood pal Nick Cravat. Even though he had his own (surprisingly successful) production company, Lancaster continued to work in productions for the big studios, although on his terms. In 1953, Burt appeared in what would be his most iconic role, First Sergeant Milton Warden in From Here to Eternity. The film would be listed by the American Film Institute in "AFI's Top 100 Most Romantic Films", at least in part because of "that scene" of Lancaster and Deborah Kerr rolling in the surf, locked in a loving embrace.

Burt Lancaster was adamant about keeping his private life private, but professionally he was fiercely loyal and enjoyed working with people he knew. Childhood friend Nick Cravat co starred in nine of Lancaster's films. In addition to the 17 films produced by Hecht, he starred in eight movies produced by Hal B. Wallis. Makeup man Robert Schiffer is credited in 20 Lancaster films, and he was hired for most of the movies he produced. Lancaster worked with Kirk Douglas in seven films in what publicity departments called a friendly collaboration, although the two actors were not particularly fond of one another or close off the set. In addition to Eternity, Burt also starred with Deborah Kerr in Separate Tables and The Gypsy Moths.

Like many other movie stars, Burt Lancaster appeared in radio programs like Lux Radio Theater and Screen Directors Playhouse in support of his films. He also stretched his comedy chops as a guest star on The Life of Riley , The Sealtest Variety Theatre and The Bob Hope Show. His talent for drama which endeared him to movie fans is showcased on Suspense and Cavalcade of America.

In his later years, Lancaster suffered from atherosclerosis. After two heart attacks, he underwent an emergency quadruple coronary bypass in 1983. He continued to act, although he was forced to slow down a great deal, until a stroke in 1990 left him partially paralyzed. On October 20, 1994, Burt Lancaster suffered a third heart attack and died in his Century City apartment. He was 80 years old. His ashes were buried under an oak tree in Westwood Memorial Park, and he asked that there be no funeral or memorial service.

The Star on the Hollywood Walk of Fame at 6801 Hollywood Blvd honors Burt Lancaster's contributions to Motion Pictures.