This compilation includes a variety of radio shows, Heart Attacks in old time radio will break your heart!

Choose your CD format
or order disks individually: Add to Cart Add to wishlist
Play a sample episode from November 29, 1946:

In pre-scientific times, the human heart was considered as the fountain of human emotions, particularly love. As medical and psychological science developed, doctors realized that love is ultimately controlled by the brain, although the actuality of love is muddied by glandular excretions. The heart is a muscle, and although it is not the center of love, it is more than a little bit important. 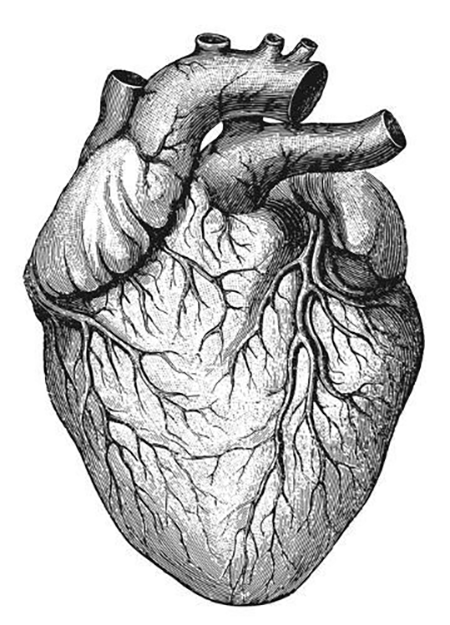 The heart is the one muscle in the body which is never completely at rest. The rest of the body has time to rest and recover from the day's activities and stresses, but if the heart pauses its steady cycle of contractions and relaxations, bad things happen.

The musculature and organs, especially the brain, depends upon a steady supply of oxygen-rich blood not only to operate but to recover from earlier exertion. The oxygen in the blood nourishes the cells and carries metabolic waste away. The brain especially requires a constant flow of blood, and if that flow is interrupted, even for just a few minutes, damage and death can occur.

Damage to the heart itself is something to be avoided at all costs. A heart attack, or myocardial infarction, occurs when there is a blockage of blood flow to the heart, often due to a blood clot lodged in the arteries which feed the heart muscle. Because the heart is only allowed to rest between beats, any blockage to the blood which nourishes it leads to very bad things.

Cardiovascular disease is a leading cause of death around the world. Since the heart normally does its important job so efficiently, a heart attack can be the ultimate unpleasant surprise. This also makes it an ideal plot device in many dramatic stories. Nefarious characters might resort to drugging their victim to artificially induce death by heart attack. A young person with a promising future may be recalled home to care for a loved-one invalided by a heart attack. One of the most remarkable plot twists occurs when the tension is highest, and a heart attack strikes the hero or the villain out of nowhere.

Blackstone the Magic Detective, October 16, 1949, Mutual, "The Creeping Death". Blackstone and his companions are enjoying listening to the radio when a bulletin comes on that their good friend, newspaper correspondent Major Stark, has died at his desk from an apparent heart attack. However, Blackstone knows that a heart attack is impossible because he had just talked to the Major who recently had an EKG and was in perfect health.

On Stage, February 17, 1954, CBS, "Heartbreak". This anthology series is built around veteran radio stars and married couple Cathy and Elliot Lewis. In tonight's program, the hard-working husband suffers a heart attack. The doctor prescribes rest and his wife promises to take good care of him. In fact, she dotes on him so much that he becomes a "cardiac invalid", scared to do anything out of fear of another attack.

The New Adventures of Sherlock Holmes, December 30, 1946, ABC, "The Strange Case of Mrs. Abernetty". The matron's son fetches Dr. Watson to examine his mother. The old lady askes Watson to bring Holmes to lunch the next day because she thinks one of the children is stealing the family silver. During the luncheon, she has a fatal heart attack, but Holmes claims that it is a case of murder. How does he know? Look at the parsley.

Your A.A.F, September 6, 1945, ABC. During the War, this program brought the American people news if the Army Air Forces, the bravery of its flyers, and the innovations brought about by its airmen. In this first broadcast after VJ Day, the groundwork is laid to make a case for a strong Air Force to win the peace. At the 14: 00-minute mark, a bulletin is read announcing the death of Vice Admiral John McCain. A pioneer of Naval Aviation, at the beginning of WWII he was appointed COMAIRSOPAC and commanded all the Allied land-based aircraft during the Guadalcanal Campaign. He later served as head of the Naval Bureau of Aeronautics and Deputy CNO for Air in Washington D.C. before returning to the Pacific to command a carrier battlegroup. By August 1945, McCain's health was beginning to fail, and he requested to be sent home to recover, however, Admiral Halsey insisted that he attend the Surrender Ceremony in Tokyo Bay. Before the ink on the Instrument of Surrender was dry, McCain was flying back to San Diego, where the heart attack claimed him just four days after the Surrender.

Dragnet, September 4, 1952, NBC, "The Big Ray". Because there was no doctor present when Mr. Prater died, Sgt. Friday and his partner need to investigate and make a report. He apparently had a heart attack, fell, and fractured his skull. As the detectives are leaving the scene, Ray the son tips them off that the milk might have been poisoned.

Suspense, February 28, 1960, CBS, "Lt. Langer's Last Collection". Police Lt. Langer caught a shopkeeper fencing jewels a while back but looked the other way for a thousand dollars. Now, he needs more money, so he shakes down the fence again for $2,000 even though the shopkeeper claims to have gone straight. The stain of the second shakedown induces a heart attack, and now the dirty cop is at the mercy of the street.