After her starring role in the controversial film Ekstase (“Ecstasy” 1933) in her homeland in Austria, Lamarr was cast with most of Hollywood’s popular leading men, typically as an exotic seductress and later became an inventor. 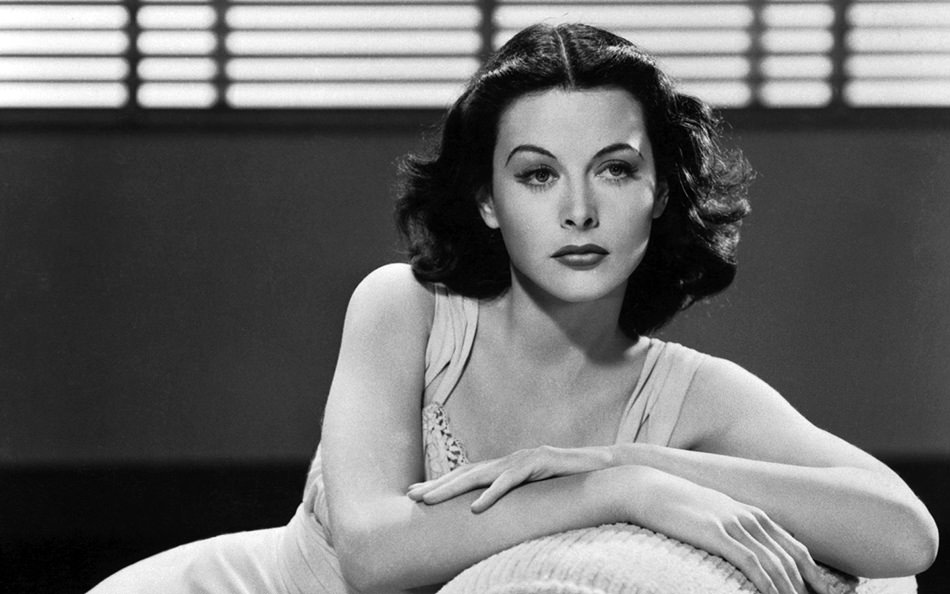 Many Hollywood leading ladies tried to cultivate an aura of exoticism, but most are not really that exotic. Many want to believe that their work can change the world, but again it is an illusion. Many have had publicists make the claim that they are "the most beautiful woman in the world". Unlike most of her contemporaries, Hedy Lamarr has a legitimate claim on all three.

Born Hedwig Eva Maria Kiesler in Vienna, 1914, her family was part of the Jewish Bourgeoisie. Papa Kiesler was a successful bank director and Mama was an accomplished pianist, little Hedwig their only child. In the late 1920s, she was discovered by producer Max Reinhardt, who brought her to Berlin for dramatic training. 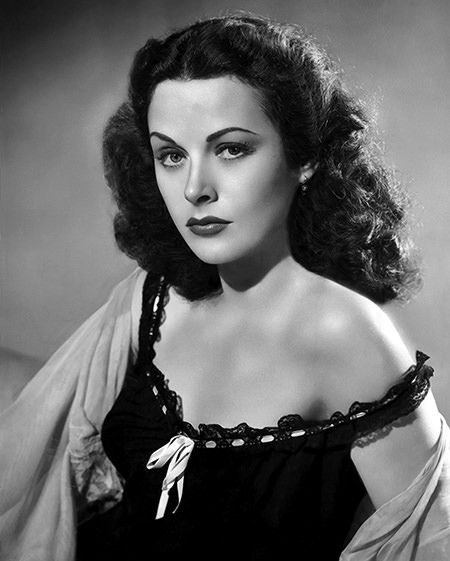 After working with Reinhardt, Hedy returned to Vienna and began working in the Austrian film industry. She started as a script girl but soon became a star. Gustav Machaty gave her the starring role in the controversial film Ekstase ("Ecstasy" 1933). The film gained notoriety with the false claim that it was the first to show nudity on the big screen (it was not the first). In the scene, she goes riding through the countryside and decides to go for a swim, leaving her clothes on her horse. Naturally, the horse wanders off with her clothes, and she has to chase after it.

As scandalous as the nudity would have been, the real trouble for the film was that it was the first time a non-pornographic depiction of sexual intercourse was portrayed in a movie. Lamarr later insisted that the intimacy was simulated, and she was reacting to being pricked by a safety pin off camera. Naturally, the film was condemned in the U.S. by the Catholic Legion of Decency, one of the first foreign films to be so condemned.

After completing Ekstase, Hedy married Friedrich Mandl, reputedly the third richest man in Austria and heir to an armaments factory. Despite being half Jewish, Mandl was reputed to be very popular with the Nazis, and both Hitler and Mussolini had attended parties he had given. He was also jealous of his young wife and was said to have bought several prints of Ekstase to prevent them from being shown. Although Mandl kept her a virtual prisoner in his palatial home, he took her to conferences concerning military technology, which she said helped to awaken her interest in applied science.

When life with Mandl became unbearable, Hedy ran away to Paris, escaping Austria before the Anschluss. Louis B. Mayer was visiting Paris on a talent search in 1937. Hedy found out that Mayer was returning to America, and she arranged to sail on the same liner. By the time they landed in New York, she had a very lucrative contract, but Mayer insisted on a name change. Her reputation as "the Ecstasy lady" would have been too much for MGM’s publicity department to handle.

She chose the name Lamarr to pay homage to silent film star Barbara La Marr. Her American film debut was Algiers (1938) with Charles Boyer. Lamarr was cast with most of Hollywood’s popular leading men, typically as an exotic seductress. Her greatest movie triumph came after she left MGM in Cecil B. DeMille’s Samson and Delilah (1949), the year’s top-grossing film.

Despite her beauty and talent, most of Lamarr’s roles were only given a few lines, and she became bored with acting. In fact, she was very "unHollywood", rather than going out, Hedy’s idea of a fun evening was a quiet dinner party with friends followed by intellectual discussion. Her interest in applied science returned when she took up inventing as a hobby. 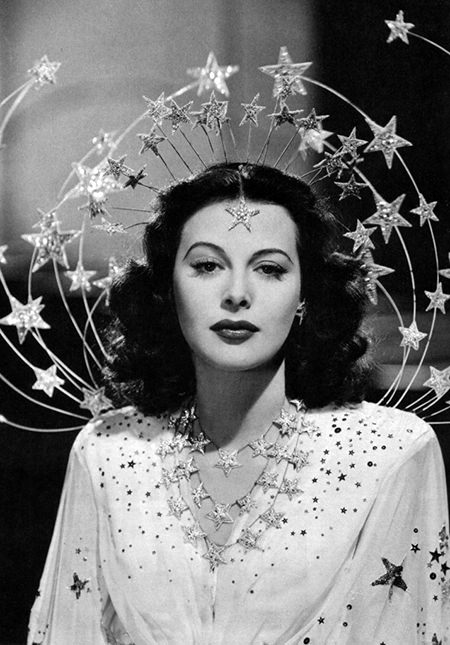 Lamarr had a drafting table installed in a room of her house. Among her projects was an improved traffic signal lamp and a tablet that when dissolved in water would create a fizzy cola-like beverage. The drink was not a success, Hedy herself admitted that it tasted like Alka-Seltzer. With her personal knowledge of the threat of Fascism, she was determined to come up with an invention that would help to win the War.

The establishment, both in and outside of Hollywood, assured Hedy that she could make a greater contribution to the War Effort by directing her talents towards War Bond sales, which she did. At War Bond rallies, she planted a sailor named Eddie Rhodes in the audience. Once she had the crowd whipped into a frenzy, she would call Eddie to the stage, and asked the crowd if they wanted to see her kiss the sailor. She would, but only after enough Bonds were sold. The technique worked very well, especially for Eddie Rhodes.

Perhaps Hedy Lamarr’s most important contribution was her invention of frequency hopping technology. Early in the War, she was discussing the Nazi tactic of torpedoing passenger liners with her composer neighbor George Antheil. With her background in armaments, Hedy knew that some torpedoes used radio guidance from the attacking ship to reach their target, but the torpedo could be sent off course by jamming the control frequency. Hedy and George realized that Allied torpedoes could be more effective if there was a way to get past the radio jamming.

Together, they developed a system of frequency hopping where the radio signal was broadcast over 88 different frequencies (corresponding to the 88 keys on a piano). The frequency changes were directed by the paper roll mechanism from a player piano. It would have been extremely difficult for a jammer to block all 88 frequencies at once. They were granted a patent on August 11, 1942, and presented their idea to the Navy.

As ingenious as the system was, the Navy was simply not interested in a torpedo technology that they had not developed themselves. The patent was declared Top Secret and shelved until the blockade of Cuba in 1962 when the Navy developed the technology to allow sonar buoys to communicate with aircraft tracking Soviet submarines. The frequency hopping technology later became the basis for mobile-phone technology, WiFi, and Bluetooth.

Although her movie career had become boring, in later years Lamarr was anxious to hold onto her fame. She sued the publisher of her autobiography after discovering that the book contained scandalous tidbits invented by a ghostwriter. As the years progressed, she turned to plastic surgery to preserve her legendary looks, but the procedures were botched and Lamarr went into seclusion to hide the disastrous results. In 1974, she sued Mel Brooks for an invasion of privacy over his lampooning of her name as a running gag in the film Blazing Saddles (1974). The suit was settled out of court (Brooks later said he was happy to pay off the suit and was flattered by the attention).

A Star on the Hollywood Walk of Fame at 6247 Hollywood Blvd honors Hedy Lamarr’s contributions to Motion Pictures. The Star is collocated with Stars honoring June Knight and Phil Baker.