As a machine of war, submarines were the first attack platforms with stealth capabilities and were great plot devices in old time radio. Dive in today!

Choose your CD format
or order disks individually: Add to Cart Add to wishlist
Play a sample episode from March 26, 1950: The very name strikes both fear and wonder in the hearts of mariners and landsmen alike. As a machine of war, submarines were the first attack platforms with stealth capabilities. They could sneak up on their prey, hidden beneath the waves. While this has an enormous tactical advantage for the attacker, it is natural for the victim to feel that the attack was somehow unsporting. As though sportsmanship meant a great deal in times of total war. The submarine boat is often a tool for the villain in popular fiction, especially if that villain is somehow technologically advanced. We certainly see this in the childrens serial The Mysterious Island when our heroes take their yacht to the South Seas in search of the beautiful missing girl.

Just as they did for real mariners, submarines became a nemesis to David Harding and the Counterspies. In "Spy Submarine at Logansport" Harding enlists the services of New England fishermen to foil a submarine trying to land saboteurs.

The Mysterious Traveler tells the same submarine story on two different occasions with different titles, "Death Comes for Adolph Hitler" and "Death at 50 Fathoms". Both episodes suppose that the nefarious dictator escaped on a submarine at the end of the War, heading for South America. After the sub is damaged in an attack and settles on the bottom of the ocean, Der Fuhrer is driven over the edge by scratching outside of the hull. Is it the scratching of his victims?

On Arch Obobler's Everyman Theater a young woman loses her fisherman husband to the sea in "The Women Stayed Home". When war comes to her village, she finds an enemy sailor from a sunken submarine and nurses him back to health. Can she face the fact that he is an Enemy?

In May of 1941, on The Adventures of Superman, Clark Kent is reporting on the Navy's newest submarine which can dive to 400 feet. While on a test dive, the sub is grabbed by something, and Clark manages to get on board the rescue sub. Can Superman save the day hundreds of feet beneath the waves?

The Jack Benny Program from Feb 1938 presents their take on the Pat O'Brien movie Submarine D1. Rochester is far from enthused: "Ain't that one of them boats that dunks?" 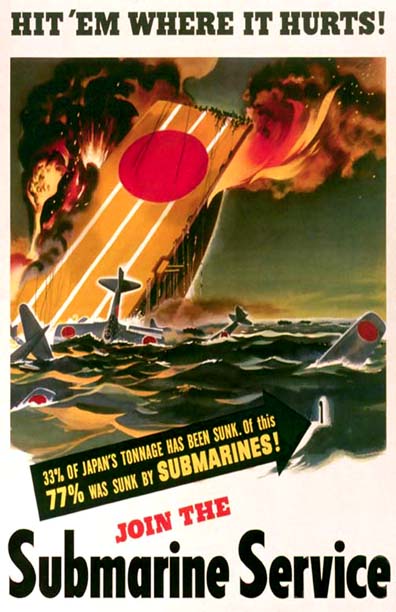 The Columbia Workshop presents in "the second of 26 By Corwin" a play entitled "The Wreck of R-77" on May 11, 1941. A sub sinks and settles on the bottom of the sea. The crew realizes there is no hope of rescue and they only have 60 hours of air left. How would you spend those last hours? Corwin does an interesting job of contrasting the silence of the bottom of the sea with deafening roar of the ship's machinery.

Hitlers undersea boats nearly broke the "Atlantic Bridge" between America and Great Britain. However, in the Pacific, the earliest and most definitive answer to the attack on Pearl Harbor came from Americas submarine forces. Fighting on a fleet submarine took a sort of bravery that is hard to imagine.

It should be remembered that until the advent of the nuclear sub, these ships did not travel underwater. Diving was only performed for attack or as a defense against enemy attacks. During normal operations the submarine was a noisy, crowded and constantly rocking diesel boat. With their long and slender shape they were fairly fast surface craft, but the crew had to perform most of their functions inside the crowded hull. Usually the conning officer and the lookouts were the only crew allowed topside, although during a surface battle a gunnery crew would have been on deck, exposed to both the weather and enemy fire.

When the order came to dive, the ship and her crew were at the mercy of the life of their batteries, the amount of breathable air left in the hull, and the ability of her officers to maintain trim. Praying all the while that the enemy could not detect them and drop depth charge bombs on them.

Dupont's Cavalcade of America presents the dramatization of several factual stories of the brave men who serve in the Silent Service. "The Quality of Courage" is the unlikely story of David Bushnell and his Turtle, a highly unlikely contraption built to operate under water, during the Revolutionary War!

"Red Lanterns on the St. Michaels" is an adaptation of a novel about the Civil War Siege of Charleston and the undersea boat designed to break the Union Blockade. "Take Her Down" is the story of incredibly tough, brave and effective submarine commander, Cmdr Howard Gilmore, who laid down his life to save his boat and his crew. The story of the USS Trigger is told in "Silent Service" starring Dick Powell; the Trigger is sent to patrol practically on the beaches of Japan, but to lay mines because there is a shortage of torpedoes. 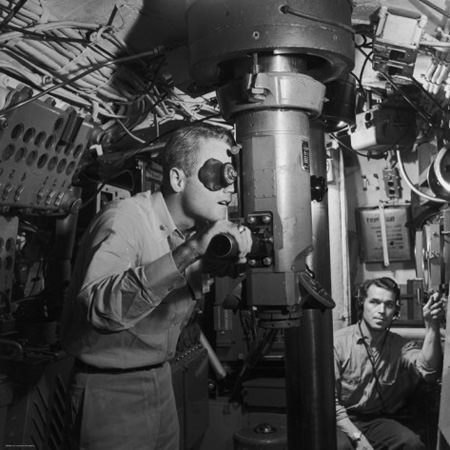 CBS's World News Today for Feb 21, 1943, opens with an announcement that the Navy reports the loss of America's largest submarine. The broadcast is filled with interesting Wartime reporting, however the portion applicable to this collection begins at the 18 minute mark. The USS Argonaut was commissioned in the late 1920's and designed for mine laying. At 358' long, she was the largest non-nuclear submarine built by the United State. She was, however, a huge and ungainly thing, underpowered, slow to dive, and with limited maneuverability underwater. After Pearl Harbor she was refitted for troop transport and her base of operations moved to Brisbane. On Jan 10, 1943, off the island of New Britain, Argonaut spotted a Japanese convoy with escorting destroyers. A US Army bomber was returning from a mission and saw the engagement. A torpedo from the Argonaut struck one of the destroyers, and the others attacked with depth charges. At one point the bow of the Argonaut came to the surface "at an unusual angle and the destroyers pounded her with gunfire until she slipped beneath the waves for the last time.