Choose your CD format
or order disks individually: Add to Cart Add to wishlist
Play a sample episode from October 18, 1940:

Radio was in an interesting place as the late 30s turned into the early 40s. WWII is just around the corner. The nation has only recently recovered from the devastation of the Great Depression.  A nation glued to the radio, trying to relax while facing an uncertain future, almost cried for a good scare. And Arch Oboler did his best to give it to them. 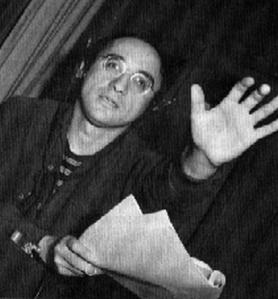 Diminutive Oboler (standing only 5'1") has been called "Inch for inch, pound for pound, the scariest writer in the history of radio." While not as popular as his contemporary Orson Welles, Oboler was Welles' equal in talent, skills, and versatility as a playwright-actor-director.

Everyman's Theater was a follow-up to the popular Arch Oboler's Plays of the 1939 season. And both of these built on the success of the Horror anthology "Lights Out". Oboler opened each episode of Lights Out with the ominous warning: "These Lights Out stories are definitely not for the timid soul. So we tell you calmly and very sincerely, if you frighten easily, turn off your radio now."

Oboler promised that Every Man's Theater would provide programs for "every man's" taste. The program was a departure for sponsor Oxydol Detergent. Oxydol had advertised heavily in the melodramatic serial programs (the Soap Operas). The gamble with Every Man's Theater paid off with critics and the public alike. The show attracted a "Who's-Who" of pre-war Hollywood Talent: Bette Davis, Boris Karloff, Brian Dunlevy, Joan Crawford, Mary Astor, Marlene Dietrich, Walter Huston, Charles Laughton, Raymond Massey, and Elsa Lanchester all made appearances. This ability to attract star power was based on Oboler's reputation as a writer and director.

Obobler, like Orson Welles, would make the move to Hollywood and the movies, and was eventually given the chance to direct. He was an early pioneer of the 3-D films with his "Bwana Devil" (1952).