The Japanese attack on Pearl Harbor changed the history of the world and officially brought the US in WWII. In the Complete Day Coverage of the Blue Network on Pearl Harbor Day (Dec 7, 1941) we can hear a nation moving from the confusion of a surprise attack to one steeled for War. 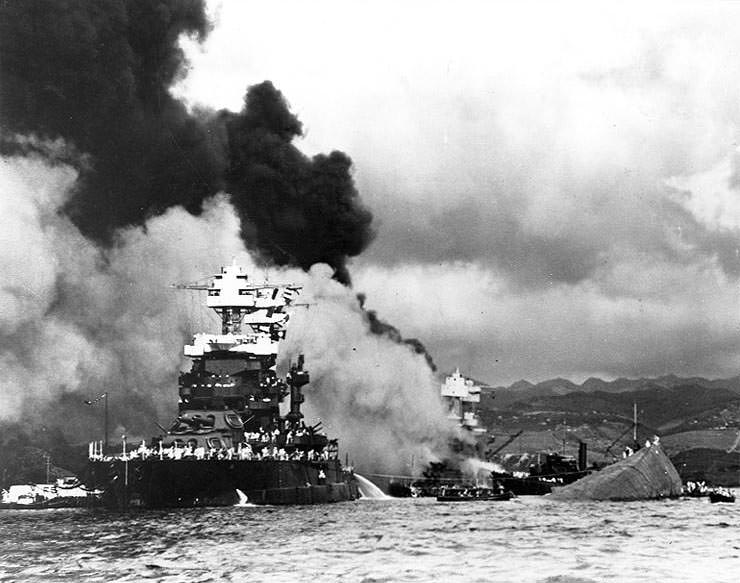 This fine collection includes the Complete Broadcast of Pearl Harbor December 7, 1941.  The attack changed the history of the world and officially brought the United States in World War II.  It is a day that will "live in infamy."

The National Broadcasting Company had been running the Red and the Blue Networks for some time when the Federal Communications Commission, believing that two networks under the ownership of a single company were unfair competition, ordered NBC to divest itself of one of the networks. The network appealed the order, but, just in case, began making preparations to let go of the Blue Network in the spring of 1941.

Although there was not an official distinction between the formats of the two networks, in practice the Red Network programs were more profitable with bigger stars and wealthier sponsors while Blue Network programming included more sustained and "public service" shows like news broadcasts. If the split was to be enforced (and it would be in January 1942), it was fairly obvious that the Blue would be the one to go. On Sunday, December 7, 1941, the value of a more public service-oriented work became readily apparent.

Most NBC affiliates carried locally produced programming in the early morning hours of that Sunday morning, but by the time Blue Network programs from New York and Hollywood became to come on the air, nearly everyone had gotten the news that the Empire of Japan had attacked the US Navy at their base in Pearl Harbor, Hawai'i, but it still was not entirely clear to the American people exactly what was going on.

In early reports, with few actual facts to report, the network turned to Upton Close. An eminent historian, lecturer, and author, Joseph Washington Hall used the pen name Upton Close so that he could travel relatively incognito through Japan and Asia and report his findings to a Western audience. His books include The Revolt in Asia: The end of the white man's world dominance (1927, G.P. Putman), Eminent Asians: six great personalities of the new East (1929, D Appleton and Co), and Challenge: behind the face of Japan (1934, Grosset & Dunlap).

Mr. Close's radio commentary on this Sunday dealt more with the political conditions in Japan than the military actions currently underway. That information, even if it had been available, would have been censored to prevent the Japanese, now recognized as the enemy, from learning the extent of their success. There was a report of Japanese troops about to be captured by the US Army on Oahu, although there were no enemy land forces involved in the Pearl Harbor attack.

One of the earliest Washington responses came from First Lady Eleanor Roosevelt who addressed the nation during her regular Sunday Evening talk for the Pan-American Coffee Bureau (the sponsor may have also made one of the first commercial responses to the Attack). Mrs. Roosevelt's regularly scheduled guest was an Army Corporal from Ft. Dix who speaks on Army morale.

By the time WJZ New York's Sunrise Revue came on the air Monday morning, the news media was receiving and reporting a clearer picture of what was happening in Hawai'i and elsewhere in the Pacific. Listeners were told to expect an address later in the day from President Roosevelt. By this point, the radio reports begin to take on a familiar tone, that of a Nation at War and listeners could hear first hand the steel which would carry their brothers, sons, fathers, and husbands to ultimate victory.

The Imperial Japanese Navy was under the command of under the command of Admiral Isoroku Yamamoto.  The Japanese attacks on Pearl Harbor began At 6:05 am on December 7, 1941 as 6 Japanese aircraft carriers released the first wave of attacks which includes 183 planes with heavy bombers and fighters.  The first wave of Japanese attackers arrived at Pearl Harbor at 7:51 am and the second wave of attacks arrived at 8:30 am.

At the moment of the attacks on Pearl Harbor, the Japanese Ambassador to the United States delivered the declaration of war to President Franklin D. Roosevelt.

The entire death toll for the day reached 2,350 with 1,178 injured.  The battleship Arizona sank within seconds killing 1,177 people.  The attack sank four battleships damaged four additional battleships and destroyed 188 aircraft among other damage.

A Japanese admiral later said of the Attack on Pearl Harbor, "We won a great tactical victory at Pearl Harbor and thereby lost the war."  The entrance of the United States in WWII eventually lead to the defeat of Imperial Japan.

This is an excellent find and includes many bulletins, news reports, and speeches.  One bulletin announces that "all recruiting stations will be open tomorrow morning at 8 am" as young men swarmed military recruitment stations looking for ways to serve their country.  First lady Eleanor Roosevelt after the attacks on Pearl Harbor speaking of her faith in the citizens of America.

There is also great additions to the Complete Broadcast of Pearl Harbor December 7, 1941 including The Infamy Speech and formal declaration of war on Japan by President Franklin D. Roosevelt delivered the following day.

This collection is also part of the larger Hawaii Collection of Old Time Radio Shows.