Known as "First Lady to the World", Eleanor Roosevelt was the legs and face of FDR's presidency, appearing where and when he could not. 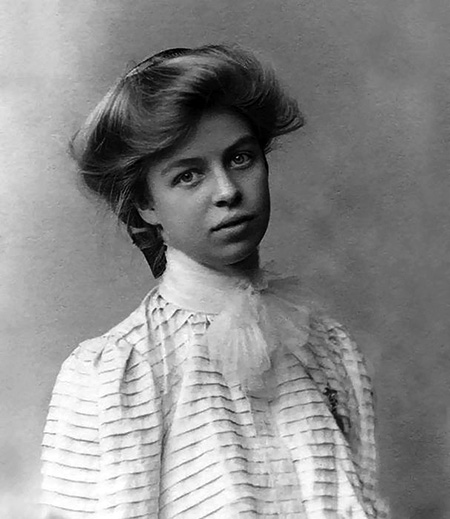 One way to measure the importance of a historical figure is to analyze the influence they had on the world. The truly fascinating part of the story is usually less of how they used that influence but how they gained it. One of the cornerstones of the American Experience is that a man from any circumstance had the potential and opportunity to rise to a position of influence, but until the closing decades of the Twentieth Century, this opportunity was largely closed to women. A few women found ways to break through this "glass ceiling", but rarely was it shattered as thoroughly as it was in the case of Eleanor Roosevelt.

Anna Eleanor Roosevelt was born in New York City, 1884, into the influential class of socialites known as "the Swells". The Roosevelt clan was descended from the Dutch settlers of New Amsterdam (present-day New York) and the land encompassed by the original family is now a large portion of Midtown Manhattan. Eleanor lost her mother, Anna, née Hall, and younger brother Elliott Jr. to diphtheria when she was eight. Her father, Elliott, was a besotted embarrassment to his older brother, Teddy. Elliott Roosevelt died from injuries sustained while suffering delirium tremens while confined in an asylum. Orphaned Eleanor was raised by her maternal grandmother in the Livingston family (other members of the "Swells") in Tivoli New York. She was considered somewhat of an "ugly duckling" and when she was fifteen the family decided to send her to the Allenswood Academy, a finishing school outside of London.

The headmistress at Allenwood, feminist Marie Souvestre, took a special interest in the young American girl, and Eleanor not only began to come out of her shell of shyness, she also learned to speak fluent French and developed remarkable self-confidence. Her grandmother summoned her back to America in 1902 to begin the process of her society debut. Eleanor's debutante season was somewhat awkward. She later revealed that "a girl who comes out is so utterly miserable if she does not know all the young people. Of course I had been so long abroad that I had lost touch with all the girls I used to know in New York. I was miserable through all that."

During the summer of 1903, while riding a train from New York City to Tivoli, Eleanor met her father's fifth cousin, Franklin Delano Roosevelt. Franklin was an incredibly striking and attractive young man, and he found Eleanor equally intriguing. The couple fell in love and became engaged, but the union was opposed by Franklin's mother. She arranged for her son to join her on a Caribbean cruise in 1904, hoping the separation would dull his ardor, but he remained determined to wed Eleanor. The wedding was timed so that (then former) President Theodore Roosevelt could give his niece away. 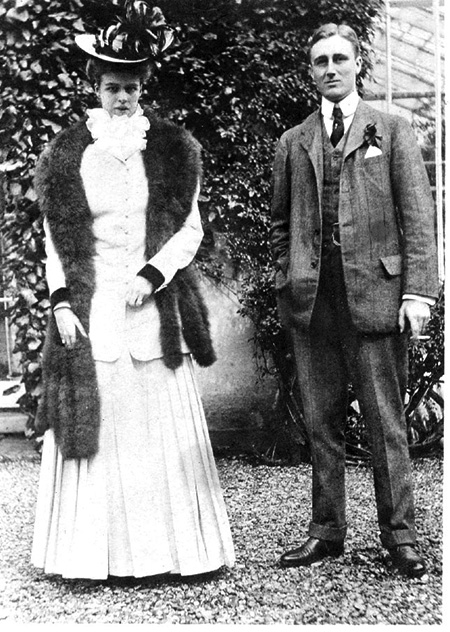 Franklin and Eleanor had six children over the next decade (the first four between 1906 and 1910), but she found herself ill-suited for motherhood, later revealing that "It did not come naturally to me to understand little children or to enjoy them". Making matters even more difficult was the fact that her domineering mother-in-law effectively ran Franklin and Eleanor's household, including raising the children. By now, Franklin was advancing on a career path previously laid out by his cousin Teddy which was designed to eventually lead to the White House. After serving two years in the New York State Senate, he was appointed Assistant Secretary of the Navy under President Woodrow Wilson in 1913.

While at the Navy Department, Franklin received education and experience in administration, Naval affairs, logistics, the inner-workings of Washington, even how to deal with the leaders of civilian labor unions. As the Great War was breaking out in Europe, the Navy was readying for a rapid expansion, so to support her husband's political career it was decided that Eleanor need a social secretary of her own, and young Lucy Mercer was hired to fill the position.

It is not exactly clear when Franklin fell in love with Lucy Mercer, but the fact is that he did. Despite her six pregnancies, Eleanor was not happy in his bed (she would describe sex as "an ordeal to be borne" to her daughter Anna). The extent of Franklin and Lucy's affair may never be fully known, but it seems unlikely to have included sex; she worked in his household, but always in the company of his wife and domineering mother, and a rendezvous at a Washington hotel was out of the question because Franklin was too well-known in the city. Nonetheless, Eleanor would come to know the extent of the affair.

In his capacity as Assistant Secretary, Franklin traveled to Europe in the summer of 1918 after America had joined the Great War. He surveyed Allied Naval facilities, met and became friends with Winston Churchill, and boarded the troopship USS Leviathan in September to return across the Atlantic. During the 11-day crossing, the Spanish Influenza pandemic infected the ship. Roosevelt survived the flu but came down with pneumonia. He had recovered by the time the ship made port in New York (in November, after the War ended, the Leviathan ship's company would see the addition of Quartermaster Humphrey Bogart), but went home greatly fatigued.

When Franklin arrived at his Washington home, he immediately fell into bed. A dutiful wife in spite of her feelings about the marriage bed and the mental stress of dealing with her mother-in-law, Eleanor began unpacking Franklin's bags where she discovered a bundle of letters from Lucy Mercer to her husband. The letters were subsequently destroyed, but their content was more than sufficient proof of the affair. Although she could not have known it during the pain of the moment, it may have been the best thing that ever happened to Eleanor Roosevelt. 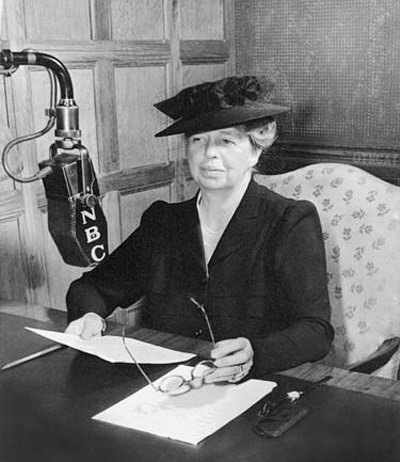 As the injured party, Eleanor "offered" Franklin a divorce, so that he could be with the younger woman. Philandering husbands were far from a rarity in Washington's political circles of the period, but a divorce would mean the end of Franklin's political ambitions. Despite her overbearing nature toward her daughter-in-law, Franklin's mother told him that if he divorced Eleanor he would be disinherited for disgracing the family name. Eleanor may not have realized that her "offer" of divorce was actually a threat of destroying him, Franklin chose to pursue a negotiated peace. Eleanor was no longer "obligated" to perform her wifely duties, Franklin was to have no further contact with Lucy, and Eleanor would now be an equal partner in the marriage. They managed to rebuild their relationship as a family when the polio struck.

Roosevelt ran for Vice President in the 1920 national elections and Eleanor was an important part of the campaign. Nonetheless, the Cox-Roosevelt ticket was soundly defeated by the Harding-Coolidge campaign. During a family vacation to Campobello Island, New Brunswick, Canada, Franklin fell ill with what would be diagnosed as polio, leaving him paralyzed below the waist. Although his mother encouraged him to set aside his political ambitions and live out his life as a country gentleman, Eleanor encouraged him to overcome his disabilities.

Eleanor's support during his recovery and on the campaign trail may have been the factor which ultimately brought Roosevelt to the White House. When the time came, Eleanor was a little hesitant to assume the role of First Lady of the United States, fearing that her White House duties would rob her of her voice and independence. After all, the role of previous First ladies had been restricted to domesticity and hostessing in the White House, roles which Eleanor would not have been particularly suited. Because of Franklin's condition, Eleanor became the legs and face of the Presidency, appearing where and when he could not. She also worked on issues which she personally found important. Mrs. Roosevelt would be the first FLOTUS to write a newspaper column, host a weekly radio program, hold her own press conferences (348 while Franklin was in office), and to be covered by an all-female press corps. 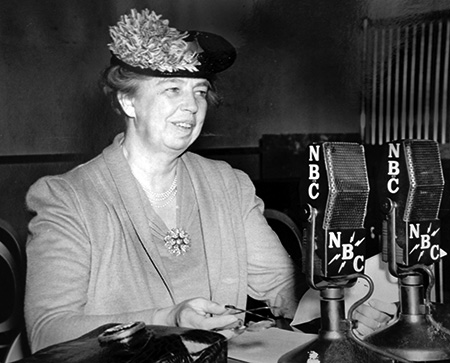 Franklin Delano Roosevelt's Presidency came to an end when he passed away at the Little White House in Warm Springs, Georgia, on April 12, 1945. Eleanor was not at Franklin's side when he died (she later learned, to her horror, that Lucy Mercer was). After the President's death, Eleanor told reporters that she was retiring from public life, but in December of 1945, President Harry S. Truman appointed her as a delegate to the newly-formed General Assembly of the United Nations. She served as chairman of the United Nations Commission on Human Rights and was instrumental in drafting the Universal Declaration of Human Rights.

Mrs. Roosevelt supported and campaigned for Adlai Stevenson's Presidential campaigns in 1952 and 1956, and tried to have him nominated again in 1960. She had reservations about supporting Kennedy, felling the Massachusetts Senator was not strong enough in denouncing McCarthyism, but eventually supported his campaign. JFK reappointed Eleanor to the UN from 1961 to 1962, and she served on the advisory committee for his Peace Corps.

Eleanor Roosevelt suffered cardiac arrest at her Manhattan home after a steroid treatment reactivate a dormant case of tuberculosis in her bone marrow on November 7, 1962. She was 78. Upon her passing, President Kennedy ordered all United States Flags to be flown at half-staff. 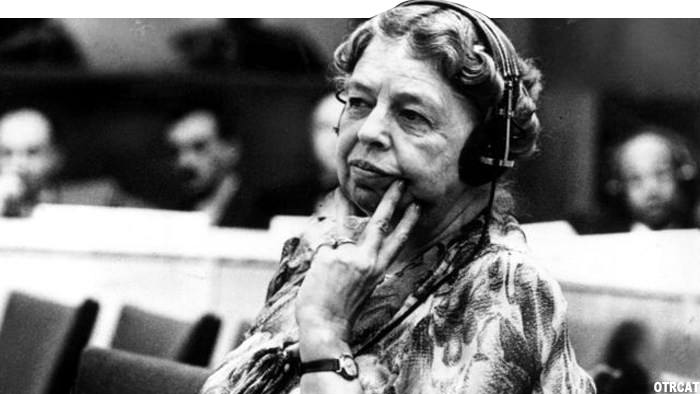