Recognized as the unofficial End of Summer, the First Monday of September commemorates the Contributions of the American Labor Movement. Although the politics are sometimes subversive, the Labor Movement has brought many benefits to American Workers.

Choose your CD format
or order disks individually: Add to Cart Add to wishlist
Play a sample episode from January 19, 1947:

"Your Land and Mine: Henry J Taylor"

It is easy to forget that there is a lot more to the First Monday of September than the end of Summer Vacation, a big Shopping Weekend, and the end of acceptably wearing White for the Season. 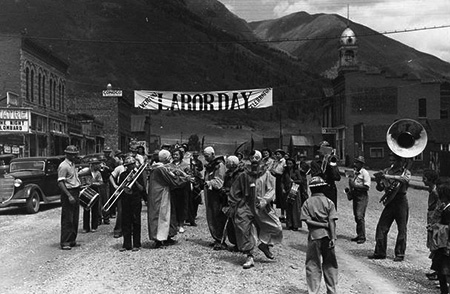 The so-called Gilded Age, which dawned as the country was recovering from the agony of the Civil War, came to pass as America embraced the wonders of the early Industrial Revolution. This Revolution brought miraculous economic growth to those who provided the Capital for the factories, but conditions were not so good for the Workers who provided the Labor.

A golden age is never golden for everyone, but working conditions during the Gilded Age were especially onerous. For some time, American factory workers were expected to put in twelve-hour shifts, seven days a week, with little or no provision for basic sanitation, breaks, or worker safety. Children as young as five or six years old toiled alongside, usually at a fraction of the meager wage earned by their elders.

The only means that these down-trodden workers had to seek redress from the Capitalists who owned the factories was by taking advantage of the solidarity between their fellow workers. Organizing became a dirty word in Capitalist circles, and from the beginning, the movement toward Unionization had decidedly Leftist connotations.

The Railroads were an important symbol of the Industrialization of America, so it is appropriate that some of the earliest Labor Organizations were formed by rail workers. The Brotherhood of Locomotive Engineers and Trainmen, now part of the Teamsters Union, was formed in 1863. 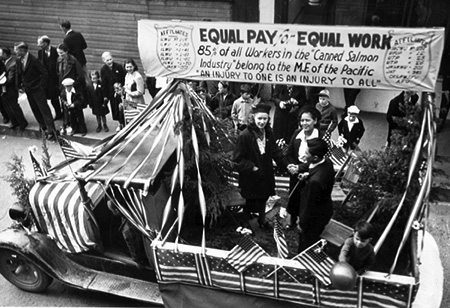 The Union Movement was fueled by a sense of Solidarity among Workers who espoused an ostensibly pure form of Democracy. Union Leadership was widely accused, not always without justification, of having a Leftist Agenda, but for the most part, the Unions fought for conditions that are now considered to be basic rights. These include an eight-hour workday, a forty-hour workweek, overtime pay, and a living wage.

The Solidarity was demonstrated on September 5, 1882, in New York City when 10,000 workers, many affiliated with the Knights of Labor and the Central Labor Union took an unpaid leave from their jobs to march from City Hall to Union Square. Labor Day first became a Public Holiday in the State of Oregon in 1887 and was made a Federal Holiday in 1894. Several Nations recognize May 1 as International Workers' Day.

Labor Day was originally intended to recognize the contributions of the American Labor Movement, but the First Monday of September has come to symbolize the unofficial end of Summer. Retailers use the occasion for Discount Sales in advance of the traditional Christmas Shopping Season. 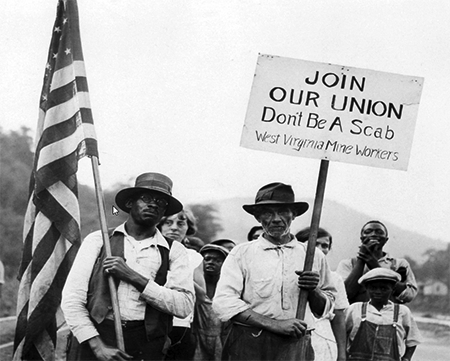 Although Schools in several States begin in August, Minnesota delays School Opening until after Labor Day to accommodate kids who participate in the State Fair which closes over Labor Day Weekend. The supposed prohibition against wearing white may have its roots in practicality. Being the End of Summer, White fashions which were worn to keep cool in pre-Air Conditioning times would have been relegated to the closet until Easter.

America has always placed a high value on hard work, although that same valuation has not always extended to those performing that work. Thanks to the labor movement, workers can expect just compensation for the efforts they contribute toward bringing a product or service to the marketplace.

The Industrial Revolution was as much a philosophical one as it was technological or economic. Products that were previously fabricated on a cottage industry scale could be brought to market more efficiently and cheaply from a factory, but a factory required the financial vision of a capitalist to get off the ground. The capitalist and his factory would never be able to produce the goods without a skilled workforce to operate things.

After buying materials and building his factory, the capitalist cannot be blamed for trying to preserve some of his profits at the expense of labor, but this often backfired. The workers have needs, and an employer ignores those needs at his peril. Although it arose as a means for the workers to gain advantages, the Labor Movement would, ultimately, benefit both the workers and the capitalist factory owners. 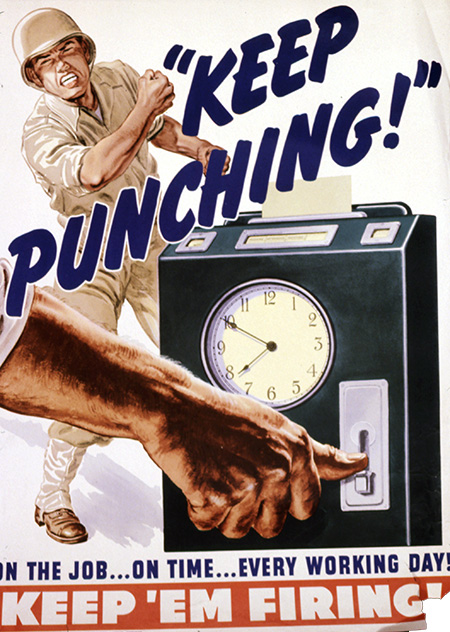 The roots of the Labor Movement were laid down by the guild system of Medieval Europe. To become a full member of a guild, a tradesman must endure an extensive apprenticeship and training period. Once he achieved Mastery of his craft, the Guild would protect its members by setting prices and standards for the work, thereby eliminating competition through a form of collective bargaining.

The Labor Movement in the United States can trace its origins to Philadelphia's Federal Society of Journeyman Cordwainers who came together in 1794 to protect themselves from the rapid industrialization of the shoemaking industry. For all of the progress and defense against the factory bosses that the unions provided their members, the Labor Movement would be guilty of protectionism and exclusion against minorities and women. Immigrants were regularly barred from entering the Unions of higher-skilled crafts which were dominated by native-born white men. However, the Unions soon realized that excluding these potential members could open a competing labor pool for factory owners.

The fact that there are two sides to the Labor Movement has both hampered and enriched its goals. Trade Unionism is embodied by the Union organizers on the factory floor, drumming up support for collective bargaining and better conditions. The political arm of the Labor Movement, often referred to as a "Workers' Party", is often seen as a left-leaning, potentially communistic coalition. Ideally, the Labor Party represents the interests of working-class citizens over those of the so-called Upper Classes.

Child labor reform, a forty-hour workweek, increased worker safety, the minimum wage, and employee health benefits are just some of the Labor Movement's accomplishments. These gains often resulted from the efforts of some sort of Workers' Party or similar movement. "Workers' Party" is often seen as a shorthand for Marxism-Leninism, which is contrary to most American values, but it is hard to deny the benefits gained for everyday people by the Labor Movement.