The following books are excellent sources of information for old time radio enthusiasts ... 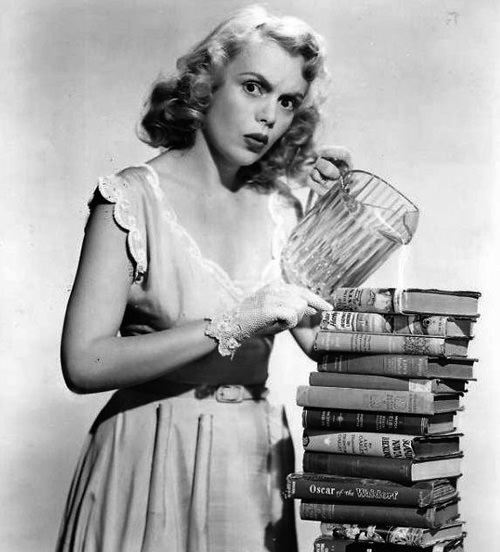 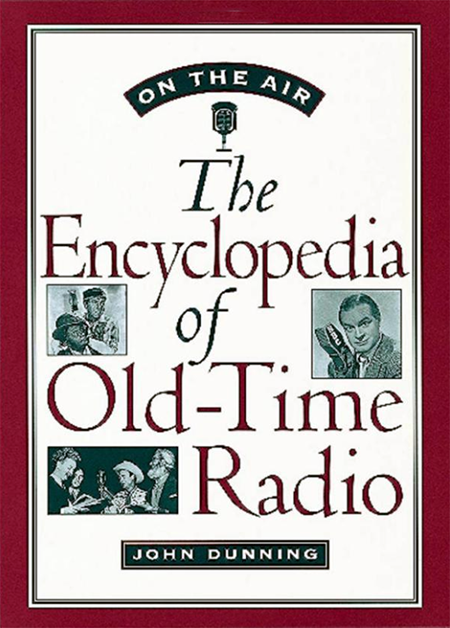 On the Air: The Encyclopedia of Old-Time Radio (by John Dunning) is an excellent volume and is by far the must-have reference guide for radio listeners. This encylopedia, though a bit pricey, is an invaluable and enjoyable quick guide to old time radio shows of the past. 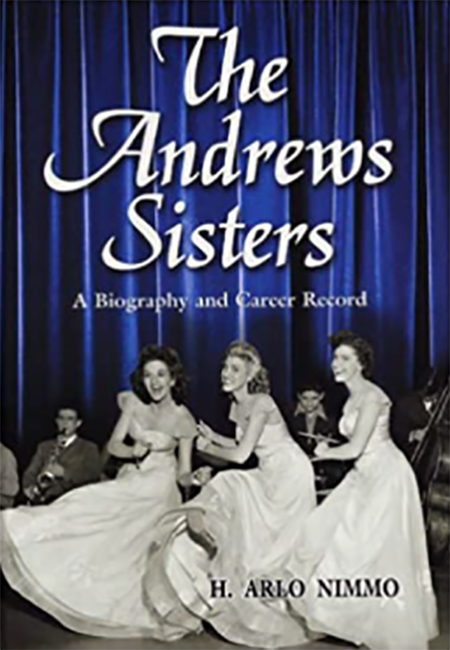 The Andrew Sisters: A Biography and Career Record (by H. Arlo Nimmo) Get to know the Andrews Sisters more thoroughly than any other published work has ever made possible. The legendary singing trio finally get their due with this 526-page complete look at their professional and private lives. Extensive coverage of their movie, radio, and television work is included with their vast 605-song discography. 108 photos.

Beyond Bond (by Wesley Britton), author of Spy Television, is his next book with in-depth history of fiction spy-film and radio over the decades.

Blast from the Past: A Pictorial History of Radio's First 75 Years (by Eric Rhoads) delivers what the title promises, every page contains photos of radio stars from the 20's to the 90's. The book left me with two feelings : sadness for the decline and fall of OTR, but also happiness because it is not really gone. It still exists in our memories and on tapes and CDs. 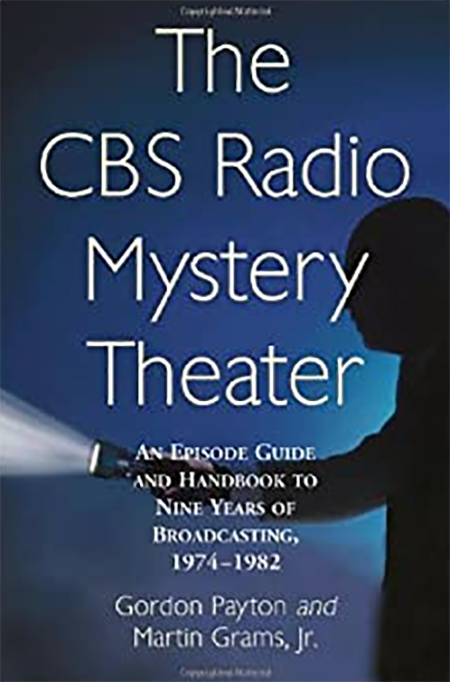 CBS Radio Mystery Theater: An Episode Guide and Handbook to Nine Years of Broadcasting, 1974-1982 (by Gordon Payton, Martin Grams) is an excellent resource for plot and behind-the scenes information of the excellent seventies production by Hyman Brown.

Charlotte Greenwood: The Life and Career of the Comic Star of Vaudeville, Radio and Film (by Grant Hayter-Menzies) is an excellent biography of stage and screen comedienne Charlotte Greenwood, based on her unpublished memoirs. 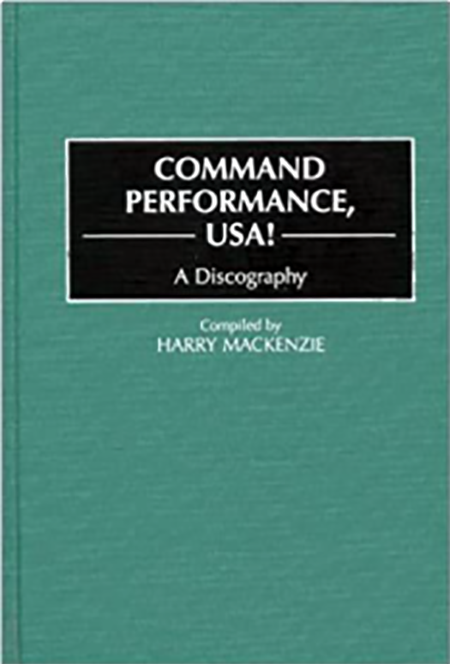 Command Performance, USA!: A Discography (by Harry MacKenzie) A compilation of every episode of this WWII series (1942-1949) made especially to fill the requests of American servicemen and women stationed around the world. Features release dates, casts, and the songs with the aritsts who performed them. Also includes similar coverage for Command Performance's spinoffs, Mail Call and GI Journal. 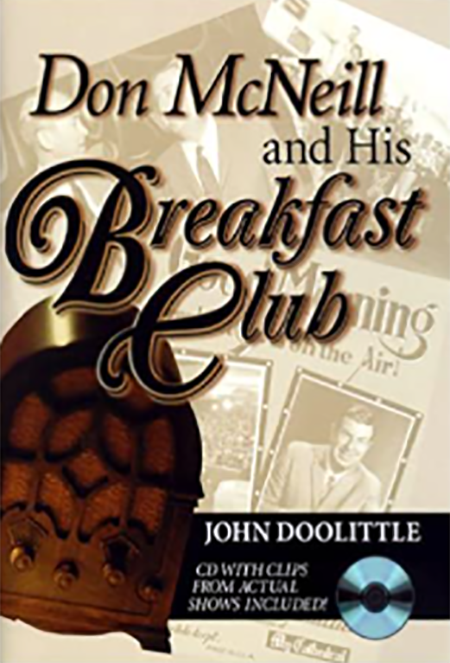 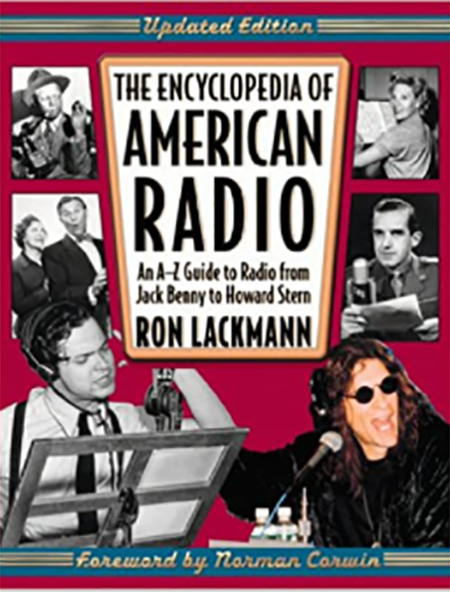 Encyclopedia of American Radio: An A-Z Guide to Radio from Jack Benny to Howard Stern (by Ron Lackmann) while not as thorough as On the Air: The Encyclopedia of Old-Time Radio (by John Dunning), this is a useful reference book with great enclosed photos. 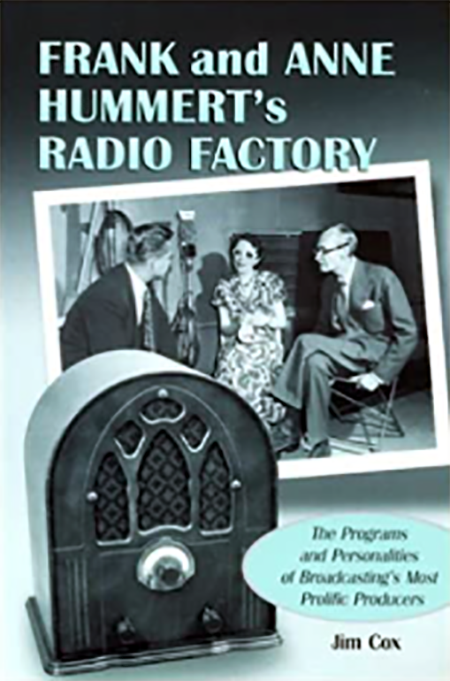 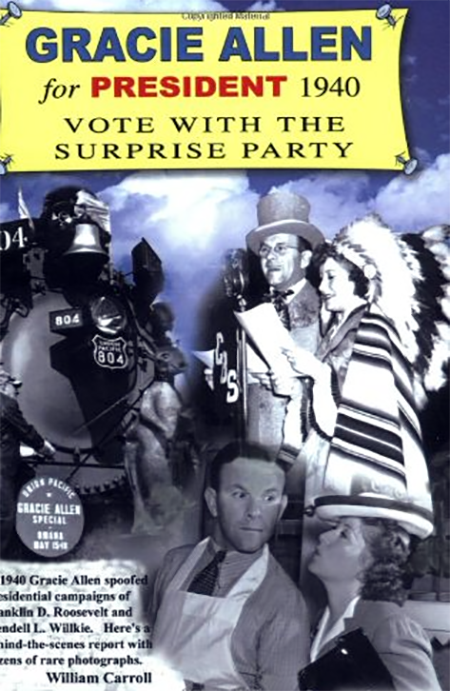 Gracie Allen for President Read about Gracie's 1940 presidential running spoof. This book includes scripts from some of her Burns and Allen campaign radio shows. Also, many never-before-seen pictures of this master spooftress on her campaign trail across the US. A delightful read!

Great American Broadcast: A Celebration of Radio's Golden Age (by Leonard Maltin) is an enjoyable and easy read. Although Leonard Maltin is not my favorite pseudo-historian, once he gets done talking about himself, the book is full of humorous anecdotes and interviews by the author. 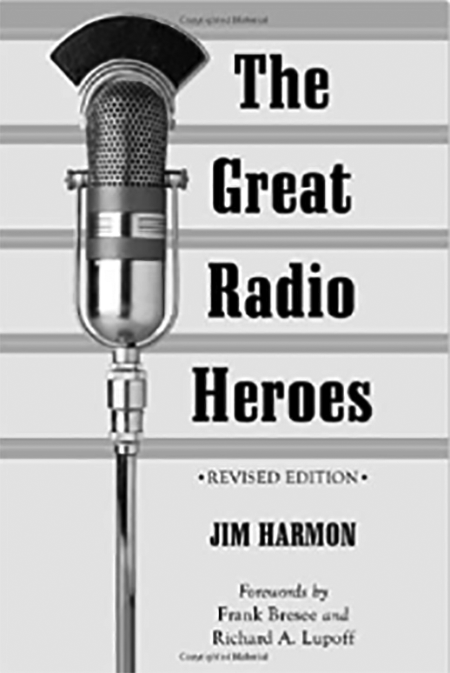 Great Radio Heros (by Jim Harmon) features the listening memories of an unabashed radio fan, with chapters devoted to different themes, which include programs such as Inner Sanctum, The Green Hornet, Mr. District Attorney, I Love a Mystery, and many more. A fun read! 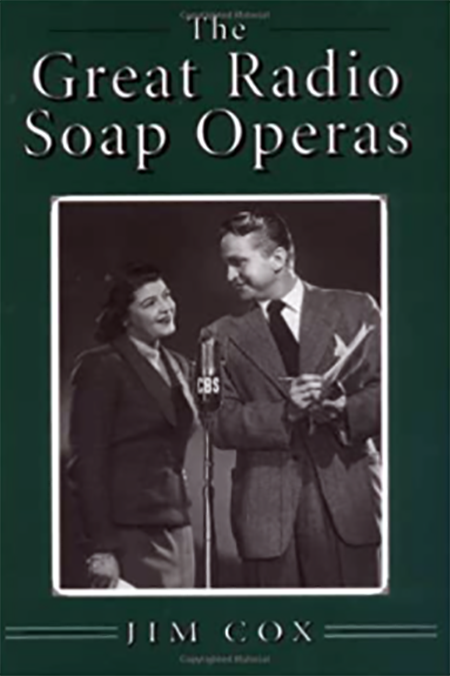 Great Radio Soap Operas (by Jim Cox) is another great book with in depth facts and anecdotes about OTR Soap Operas and much more!

Hello Everybody (by Anthony Rudel) is overview of the birth of radio with an emphasis on the entrepreneurs and evangelists, hucksters and opportunists who saw the medium's potential. The book traces the transition from hobbyists to the radio craze of 1922 when Americans spent more than $60 million on home receivers that brought the sounds of urban life to rural areas. 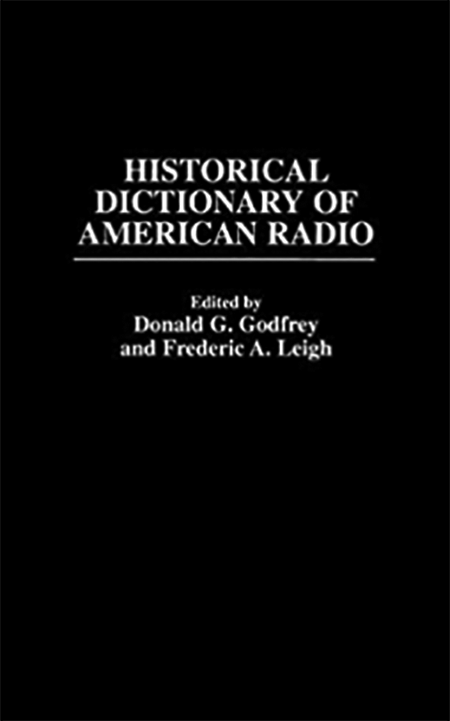 Historical Dictionary of American Radio (by Donald G. Godfrey & Frederic A. Leigh) Hefty 520-page encyclopedia of radio history: its pioneers, major industry leaders, networks, technologies, periodicals, genres, trends, and laws. A fine volume that covers the areas of radio the books on radio programming have to leave out. A chronology and extensive bibliography add to the comprehensiveness. 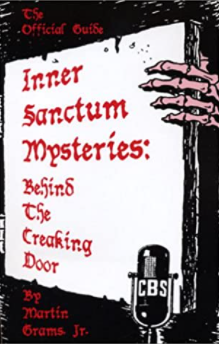 Inner Sanctum Mysteries: Behind the Creaking Door (by Martin Grams) is the definitive book on the old time radio series, Inner Sanctum, including in-depth logs and anecdotes. 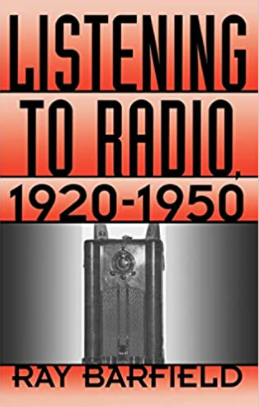 Listening to Radio, 1920-1950 (by Ray Barfield) is an interesting overview of the impact of old time radio show written more from listeners' perspectives. 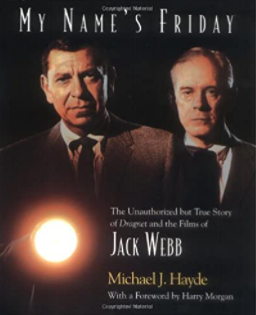 My Name is Friday: The Unauthorized but True Story of Dragnet and the Films of Jack Webb (by Michael Hayde) is a must have for any Jack Webb, Dragnet fans. The book skims over his rise as a fatherless child growing up in the slums of LA almost succumbing to asthma as a child (although later in life, ironically he was a chain smoker). This book follows his steps to the top including the production of Dragnet and Pat Novak and later covers the many films and late 60's color TV version of "Dragnet" which was a little to campy for most. The goods goes on until his death in 1982, this is a great book full of photos of everything including "Dragnet" from "Fatima" cigarette magazine adds to photos of 1950's Dragnet toys. 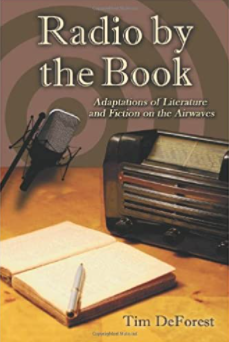 Radio By the Book (by Tim DeForest) examines individual characters that jumped from prose to radio and a number of programs that specialized in dramatizing literature. It covers mystery and detective shows, adventure stories, westerns, and science fiction, and anthology shows that adapted novels by such greats as Twain, Steinbeck and Dickens. 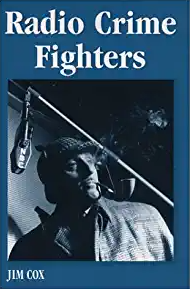 Radio Crime Fighters (by Jim Cox) is another great book by McFarland publishers and is a great resource on the radio thrillers with anecdotes of the cast and crew and a great read. 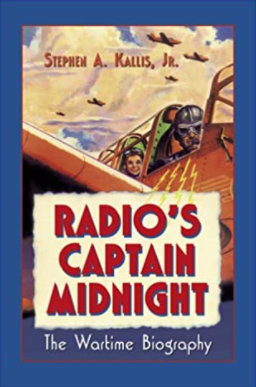 Radio's Captain Midnight The Wartime Biography (by Stephen A. Kallis Jr.) The author got access to all the sponsor's original radio scripts from WWII to compile this biography of Captain Midnight with special emphasis on his WWII exploits. Five appendices cover such topics as cryptology, Secret Squadron equipment, rocket planes, Captain Midnight in other media, and a history of the radio series. 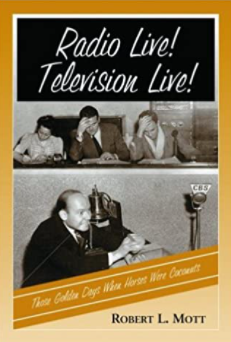 Radio Live! Television Live! Those Golden Days When Horses Were Coconuts (by Robert L. Mott), the author of Radio Sound Effects: Who Did It, and How, in the Era of Live Broadcasting and an Emmy-nominated forty-year veteran of radio and television sound effects work, recalls his career through dozens of rich anecdotes about the crazy world of live broadcasting. How the industry came to rely on sound effects, in particular the use of laugh tracks, is especially interesting reading. 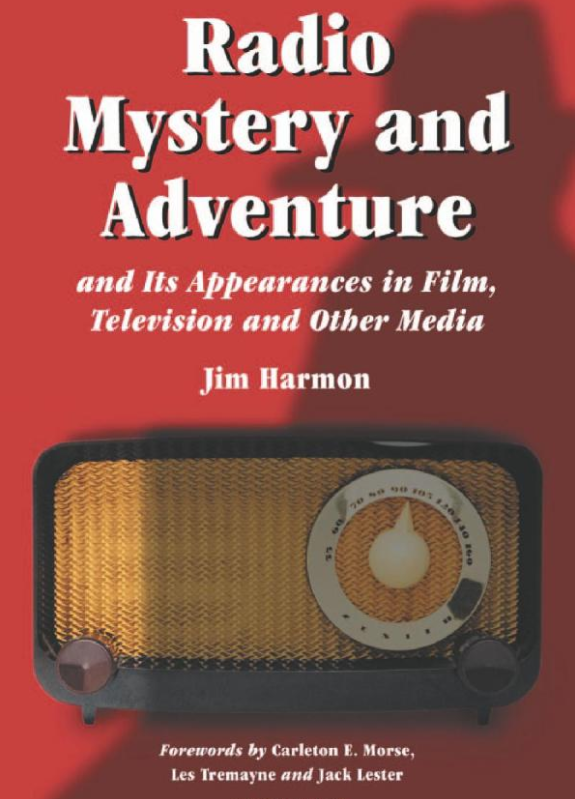 Radio Mystery and Adventure and Its Appearances in Film, Television and Other Media (by Jim Harmon) Fourteen series (including Superman, I Love a Mystery, Tom Mix, Little Orphan Annie) are given extensive esays covering their histories in detail, with air dates, sponsors, cast and production credits and more. The "other media" referred to in the title are premiums, magazines/books, and comics. Forewords by Carleton E. Morse, Les Tremayne & Jack Lester. 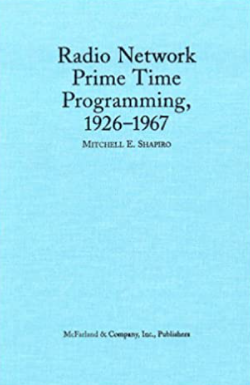 Radio Network Prime Time Programming, 1926-1967 (by Mitchell E. Shapiro) Discover what was on prime time on each network from January 1929 to July 1961 via tables detailing the schedules of each network. This essential 640-page book also has a detailed listing of all network programming moves July 1926 to August 1967. Series premieres, cancellations, and time slot moves, and more for each network sorted in seven chapters (one for each night of the week) make finding information fast and easy. 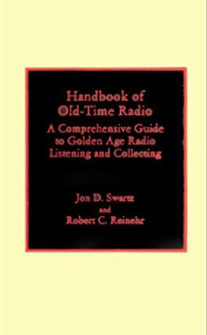 Radio Program Openings and Closings, 1931-1972 (by Vincent Terrace) The openings and closings of 444 radio series include a brief introductory paragraph about their storyline, cast, sponsors, and air dates. Series with a regular sponsor have a sample commercial included. Appendices cover series and their sponsors, products with their jingles, and World War II announcements. Wets the appetite for OTR!

Raised on Radio (by Gerald Nachman) is more than the average fan-book, but a entertaining and fast read as an overview to old time radio which compares contemporary shows with the great radio shows of the past! 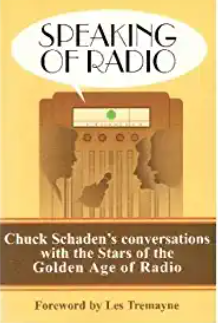 Speaking of Radio (Chuck Schaden's conversations with the Stars of the Golden Age of Radio) (by Chuck Schaden) During Mr. Schaden's 34 years of broadcasting OTR he's interviewed dozens of stars of the great days. Here are forty-six of them from Jack Benny to Harry Von Zell who tell great behind the scenes stories and little known anecdotes of the golden age of radio. For instance did you know the mother on A Date With Judy was announcer Don Wilson's wife? 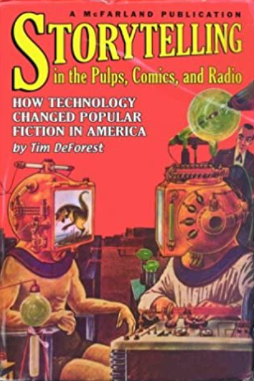 Storytelling in the Pulps, Comics and Radio (by Tim DeForest) examines storytelling in America during the first half of the twentieth century covers comics, radio, and pulp magazines. Each was bolstered by new or improved technologies and used unique attributes to tell dramatic stories. The Witch's Tale: Stories of Gothic Horror from the Golden Age of Radio (by Alonzo Deen Cole) is an excellent resource for any serious listener of the Old Nancy (and her cat Satan!) in the WOR series, Witch's Tale! 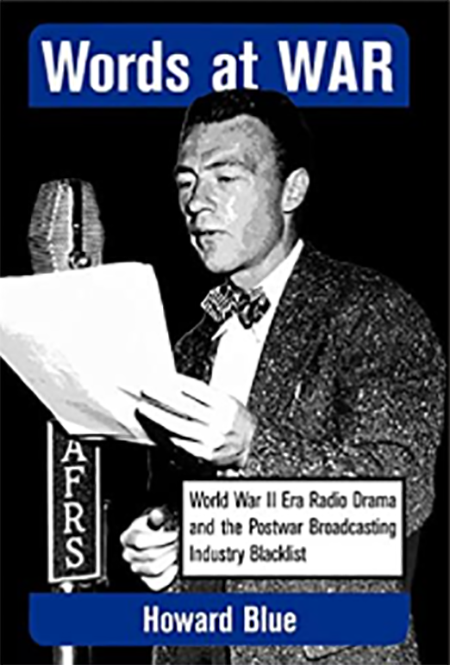 Words at War: World War II Era Radio Drama and the Postwar Broadcasting Industry Blacklist (by Howard Blue) discusses the plight of progressive radio writer and actor's to battle social injustices and the subsequent blacklisting they faced after the end of World War II.

Even more OTR Books of Interest (Possibly out of print):

Spoiler : I realize that your list is at best a partial bibliography. However, I am wondering about the absence of any books on news broadcasting. Are there none or is it that you just did not list them? Or are there none that you found worthwhile? I know of none myself - but then I haven't looked. Snapper

Reply
Spoiler : Thank you for your "small business." That may be an accurate report of the size of your business. It is inaccurate when it comes to its significance. OTR was a real find. I rarely watch TV beyond PBS. As for radio it is NPR or the local classical music station. There is also a four hour show on one of the local NPR radio stations that broadcasts 4 hours of Old Time Radio on Saturday evening. I find your discs particularly useful when teaching American History. It depicts the kind of humor and drama the nation once prized. It also provides an occasional instance of where early news reports sometimes get matters wrong. I am particularly fond of the news broadcast on the day Pearl Harbor was bombed which reported that Japanese battleships were shelling Honolulu. It is a particularly useful example of the need to follow up on news rather than relying solely on first reports. You might mention to your customers a book by Leonard Maltin entitled The Great American Broadcast: A Celebration of Radio's Golden Age. It is a good introduction of what radio broadcasting was like in the early days. There are chapters on what it was like to be a writer, actor, sound effects person, announcer - even a sponsor or member of the audience.