Unlike many of the so-called "elitist arts" (grand opera, symphonic music, etc.) no special knowledge or experience is necessary to be able to listen to and enjoy an old radio show. If you're like me, however, you probably want to know more about your favorite programs: the dates when they originally aired, the stars and guest stars that appeared on them, which broadcasts from a particular series are especially noteworthy or memorable, etc. The OTRCAT catalog descriptions are quite useful in this regard, particularly when you are considering ordering episodes from a specific radio series. Your listening experience can also be made more enjoyable by the information contained in the many books on old-time radio that have been written over the years. Here are a few of the OTR-related books in my library that I find particularly informative. (Many of you are probably already familiar with them.) Most of these titles should be available from your local library. Or, if you want your own copy of a particular title to have handy for easy reference, used copies can usually be acquired very reasonably on-line. (My favorite on-line source for used books is ABE BOOKS.com.) ON THE AIR - The Encyclopedia of Old-Time Radio (1998)
by John Dunning.

If I had to limit myself to just one book on old time radio, this would be it. Here are some 1,500 radio shows presented in alphabetical order, including all of the great programs of the 1930s, '40, s and '50s: Jack Benny, Fibber McGee and Molly, The Lone Ranger, Suspense, The Challenge of the Yukon, The Green Hornet, The Railroad Hour, Major Bowes Original Amateur Hour, and The March of Time, to name just a few. For each program, the author provides a complete broadcast history with the timeslot, the network, and the names of the show's sponsors. He lists major cast members, announcers, producers, directors, writers, musicians, sound effects people and even the show's theme song. There are also umbrella entries. The umbrella entry for News Broadcasts, for example, describes news programs such as CBS World News Today and also provides capsule biographies of major radio news reporters such as Elmer Davis, H.V. Kaltenborn, Lowell Thomas and Edward R. Murrow.Most important, there are fascinating essays for each program that take you behind the scenes to capture the feel of a typical broadcast and which provide engrossing information about the people who were involved in the show. An essential reference work for libraries and radio stations, this is THE book for anyone who loves old-time radio. Using some 900 rare photographs, a noted radio historian provides the reader with a visual history of radio, from the first 1920 broadcast through its "Golden Era" of the 1930's and '40s, to the introduction of the first DJ's, Top 40 radio and later Talk Radio. Many consider this book to be the most extensive, decade-by-decade, era-by-era, photo-by-photo account of American radio ever published. One of the first books ever written about old-time radio this is still one of the best. The author grew up listening to radio during the 1930s and '40s and knew as much about the histories of the great radio shows of yesteryear as anyone. Here, he shares his knowledge and love for such classic programs as The Lone Ranger, Jack Armstrong, One Man's Family, The Green Hornet, I Love a Mystery, Tom Mix, Little Orphan Annie, Gangbusters, and many others. There is even information on some of the great radio premiums that could be had by sending in a box top or a label from the sponsor's product. This is one book that should be every old-time radio fan's library! The Great American Broadcast - A Celebration of Radio's Golden Age (1997)
by Leonard Maltin.

Based on hundreds of personal interviews, this book provides a fascinating oral history of radio's golden age when programs such as One Man's Family, Vic and Sade, Suspense, and Escape turned America's airwaves into coast-to-coast magic. Included are many behind-the-scenes stories of some of the medium's most colorful personalities: actors, directors, writers, announcers, producers, sponsors, and even sound effects wizards. Also included are more than 100 rare black & white photographs and illustrations. 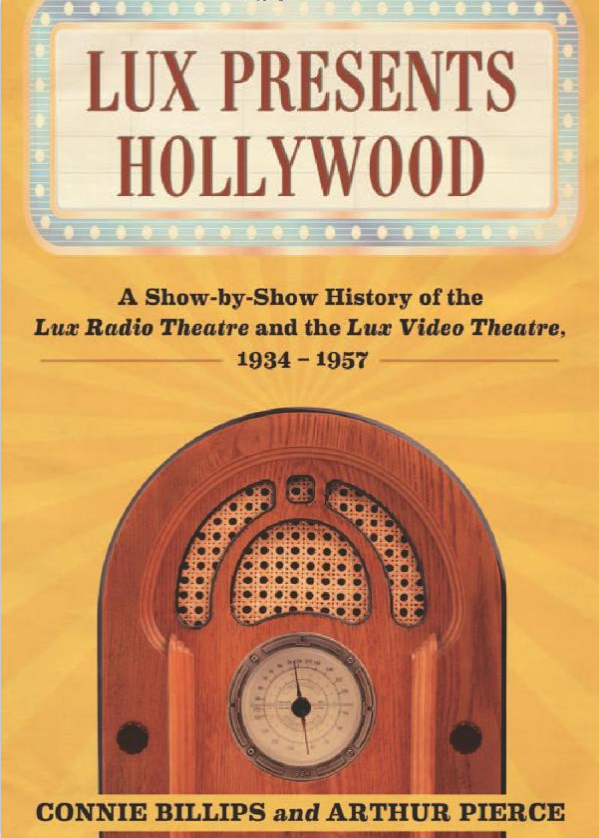 Lux Presents Hollywood - a Show-by Show History of the Lux Radio Theater and the Lux Video Theater 1934-1957 (1995)
by Connie Billips and Arthur Pierce.

Here is the definitive history of one of radio's most important and influential dramatic anthology series. During its "Golden Era," when it was hosted by noted Hollywood director Cecil B. DeMille, it had the biggest budget, the biggest stars and the most acclaim of any radio program. In addition to a general history of the series, there is a complete log of each show that was broadcast that lists cast members (and the roles they played), literary sources, and a brief commentary on the broadcast itself. There is also a great deal of interesting trivia surrounding certain broadcasts such as the one of The Plainsman on May 31, 1937, where Frederick March was brought in at the very last minute to replace an ailing Gary Cooper. If you're a fan of the Lux Radio Theater, this book should be in your library. 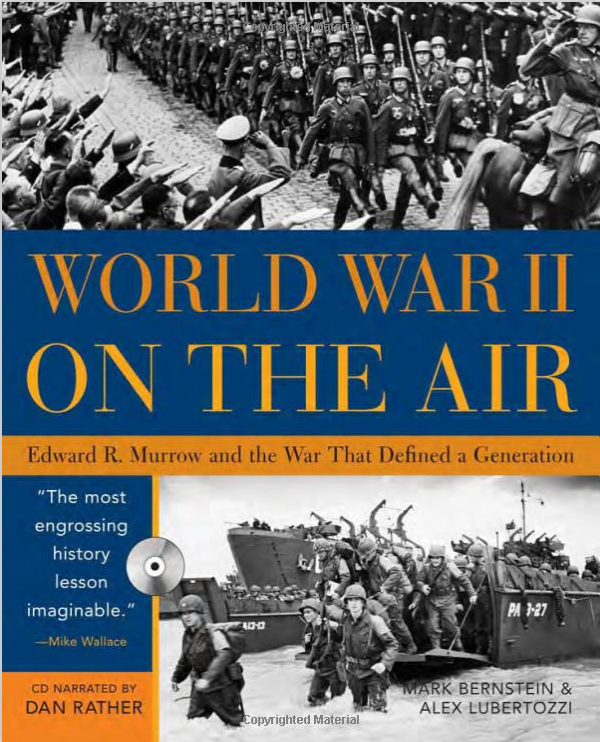 World War II on the Air - Edward R. Murrow and the Broadcasts that Riveted a Nation (2003)
by Mark Bernstein and Alex Lubertozzi.

When World War II broke out in Europe there was no television or 24/7 cable news to provide live reports on the events that were taking place. Back then, most Americans relied on radio to keep themselves informed on the latest war news. No one did a better job of covering the war for radio than Edward R. Murrow and the team of correspondents (William L.Shirer, Larry LeSueur, Winston Burdett, Cecil Brown, Charles Collingwood, Mary Marvin Breckinridge, Howard K. Smith, Bill Downs, and Richard C. Hottelet) that he assembled for CBS. Many of the important CBS World War II broadcasts still survive and are available today. This book recounts the dramatic story behind these broadcasts and the often-hazardous conditions under which they were made. There are also brief biographies of CBS war correspondents. If you are the least bit interested in the news and commentary programs from World War II, then this book is highly recommended. One of radio's best-remembered dramatic shows, Suspense can be summarized by its opening announcement: The hushed voice and the prowling step . . . the stir of nerves at the ticking of a clock . . . the rescue that might be too late, or the murderer who might get away . . . we invite you to enjoy stories that keep you in . . . Suspense. During its golden age, Suspense presented top stars of Hollywood and Broadway (Cary Grant, Frank Sinatra, Jack Benny, Lucille Ball, Ronald Reagan, etc.) in roles they were usually never associated with. This book provides a complete history of this remarkable series. It includes memories from the directors, writers, sound effects men and actors as well as a complete and detailed broadcast log of each episode, listing the cast and providing a brief synopsis of the plot. If you're one of this series' many fans, this book is one you will definitely enjoy. The Green Hornet (2010)
by Martin Grams and Terry Salomonson.

Here is the complete history of one of the most famous radio shows of all time, beginning with its creation in 1936 through to it final broadcast on December 5, 1952. In addition to a complete broadcast log listing each episode, there are biographical details of the cast and the characters they played, many rare photos, excerpts from scripts, and a brief synopsis of each story. There is also information on the two Green Hornet cliffhanger movie serials, the 1960s Green Hornet television show, Green Hornet comic books, merchandise, etc. No other book covers the story of The Green Hornet as completely or as accurately as this one.

The above-mentioned titles are just a sampling of the many books on old-time radio that are available. Whatever your particular old-time radio interest, there is probably one or two books out there that deal with it and which will give you a much better understanding of what all was involved in bringing those broadcasts to the air. Having this extra knowledge is guaranteed to make your listening experience all that much more enjoyable!

Eric Beheim is a life-long radio enthusiast. A former commanding officer of a Naval Reserve Combat Camera unit based in San Diego.

Born in the first wave of "baby boomers" he grew up with radio and remains a life-long radio enthusiast. His particular interests are collecting news and commentary programs from the late 1930s and early 1940s (including World War II news), and programs that feature performances of operettas and musical theater presentations.

Be the first to comment on "OTR Bookshelf: Old Time Radio Book Review"