As a pioneering correspondent for CBS News, William Shirer reported from Germany during the period before the beginning of WWII through the early Nazi triumphs, and later wrote about the period in The Rise and Fall of the Third Reich.

Although there were many influential voices (both within and outside of government) calling to maintain a policy of American Isolationism, by the time War-clouds in Europe broke in 1939, most Americans realized that Hitler was a force of evil in the world who would have to be dealt with. Naturally, we preferred that the European nations would be the ones to deal with him, but if necessary (and as the months passed, it became more obvious that it would be necessary), American forces would have to step in and "deal with" Nazism.

America's education about Hitlerism came from reports from journalists working on the Continent. Print journalists provided a detailed and nuanced picture of what was happening in Berlin and beyond, but few of them had the influence and reach of the newly-formed CBS News Department and "Murrow's Boys". No reporter, before or after the War, provided as clear a picture of Hitler and his methods and intentions, then the first of "Murrow's Boys", William Shirer. 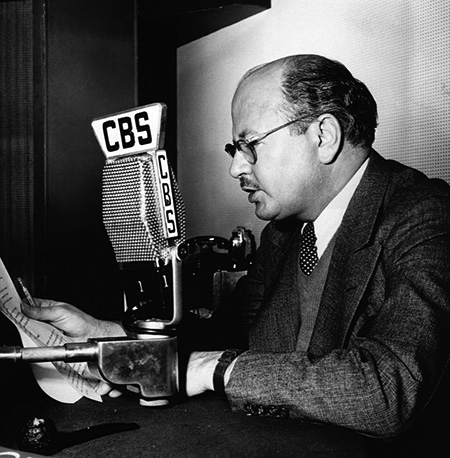 When Edward R. Murrow joined William Paley's "Tiffany Network" in 1935, CBS did not have a dedicated news department. Murrow was hired as director of talks and education, and his job was to line up newsmakers who would talk about issues of the day. CBS announcer Bob Trout, who helped to organize FDR's "Fireside Chats during the Great Depression and created the position of anchorman, became Murrow's mentor and taught him the importance of creating a sense of intimacy with the listening audience. Murrow was sent to London in 1937 to head up the network's new European division. One of the first things he did was to tour the continent to get a feel for the land, meet important persons, and hire a few experienced American correspondents to help him present Europe to the American audience.

William Shirer was born in Chicago, 1904, where his father had been a lawyer and eventually an assistant district attorney. When his father was killed by peritonitis in 1913, his mother took William and his younger brother to live with her parents in Cedar Rapids, Iowa. Shirer did well at Washington High School and Coe College in Cedar Rapids, working on the student newspaper and writing for the sports page of the Cedar Rapids Republican. When he graduated from college, he worked his way across the Atlantic, pitching hay on a cattle boat. He intended to visit Europe for six months, he stayed for the next 15 years.

After touring England, Belgium, and France, and nearly out of money, Shirer wandered into the Paris offices of the Chicago Tribune. There was an undeniable vibrancy to life in post-WWI Paris, made even more so by the American expatriate community, which included luminaries like Hemingway, James Thurber, Isadora Duncan, the Fitzgerald's, Ezra Pound, and Gertrude Stein. Such company made Shirer realize how isolated his Mid-Western upbringing had been, and he began studying European history at the College de France. He covered Lindberg's arrival in Paris for the Tribune as well as the IX Olympic Games in Amsterdam. The paper also sent him to cover the Near East and India and he met and became friends with Mohandas Gandhi.

In 1931, Shirer married photographer Theresa Stiberitz in Vienna and she became his assistant when he was promoted to head the Tribune's Central European division. Unfortunately, the paper shut down the division as the Depression deepened. The couple lived on savings and shared a villa with guitarist Andres Segovia for a time. The Hearst Syndicate wire service, Universal News Service, hired Shirer in 1934, but let him go in 1937. On the same day Universal gave his notice, Shirer was contacted by Ed Murrow.

Murrow and Shirer struck up an immediate friendship, and it was decided that Shirer would open an office in Vienna, pending an audition broadcast so the CBS brass could get a feel for Shirer's on-air voice. In March 1938, after weeks of political pressure from Nazi Germany on the Austrian government, Shirer called Murrow in London to tell him about the beginning of the Anschluss, Germany's annexation of Austria. Shirer complained that the Austrian radio facilities, where he would have normally transmitted his report, had been taken over by Nazi forces who would have censored his report. Murrow instructed Shirer to fly to London to make the report while Murrow flew to Vienna to take his place. Shirer's report was one of the first eyewitness accounts of the German takeover of Austria, and the next day CBS Headquarters tasked Murrow and Shirer with organizing and European News "Round Up" of reports from various capitals, hosted from New York by Murrow's mentor, Bob Trout. The broadcast was organized over sketchy telephone connections in eight hours and revolutionized broadcast news. 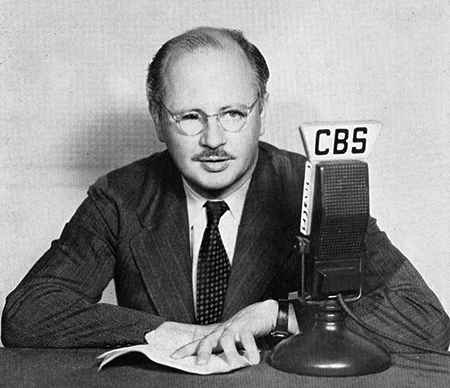 Shirer changed his base of operations from Vienna to Berlin and attended many Nazi Party functions and Rallies. When German forces invaded Poland in the fall of 1939, signaling the beginning of WWII, Shirer was with the troops to report the effectiveness of the new Blitzkrieg form of warfare. From his base in Berlin, Shirer reported on the invasion of Denmark and Norway in March 1940 and became an expert in using American slang and inflection to get the truth past Nazi censors who had been trained in formal British English.

In what would be a terrific journalistic triumph, Shirer even managed to "scoop" Hitler himself at the signing of the German armistice with France on June 22, 1940. Shirer was part of the press corps that followed the triumphant German Army as it advanced during the Battle of France. Hitler chose to symbolically accept the French surrender at Compiègne Forest, the site where the Germans signed their "humiliating" capitulation at the end of the First World War. To ensure that the German press would be the first to spread the news of the French defeat, Hitler ordered that the foreign press corps be returned to Berlin, but Shirer left the hotel early that morning and hitched a ride to Compiègne with a German officer whom he knew despised Hitler. By staying unnoticed on the fringes of the activities, Shirer became a witness to one of the pivotal moments of the War. "I have seen that face [Hitler's] many times at the great moments of his life. But today! It is afire with scorn, anger, hate, revenge, triumph."

After the Armistice was signed, Shirer tried to place a call to CBS headquarters to record his report for broadcast after the German press released their report. Thinking that he must have permission to send the transmission, German technicians put the broadcast over the shortwaves. When CBS heard what they were receiving, they immediately put the report out over the American network, and Shirer managed to scoop the Nazi propaganda apparatus by six hours.

As the War progressed, and especially after British bombing raids began to hit German cities, German censorship tightened to the point that Shirer was forced to call his bosses at CBS to tell them he could no longer send meaningful reports. Before leaving the country, he was tipped off that the Gestapo was building an espionage case against him which would have carried a death sentence. He left Germany in December 1940.

As important as William Shirer's reporting from Germany was, his real contributions to history came with his books written and published after the War. Many were based on his direct experiences as recorded in his notes and diaries, but his most important work, The Rise and Fall of the Third Reich (1960) combined these with evidence gleaned from secret Nazi documents seized at the end of the War.

Shirer's personal political leanings were always liberal, but he denied ever being a Communist sympathizer. He was named in Red Channels because he had once signed a Friend of the Court brief for the Hollywood 10. Unable to work during the blacklisting, he was able to keep his children in school by lecturing on the college circuit, which he said was the last bastion of free speech during the Fifties.