Nobel Prize Winner John Steinbeck was a great American writer known for The Grapes of Wrath, Tortilla Flat, Of Mice and Men, The Winter of Our Discontent and more.

John Steinbeck was a great American writer, that fact has not been in dispute since 1935 with the publication of Tortilla Flat, a tale about a group of paisanos living on the outskirts of Monterey, California, after the Great War and before the imposition of Prohibition. Steinbeck was a great writer, but just how great in the scheme of Twentieth Century American literature is open to debate. In 1962, Steinbeck was awarded the Nobel Prize for Literature, which, at the time, may have actually been harmful to his reputation. Several of Steinbeck's works are required reading for American high school students yet his works have frequently been banned around the country, even as late as 2003 when a school board in Mississippi banned The Grapes of Wrath (1939, winner of the Pulitzer and the National Book Award) for obscenity.

John Ernst Steinbeck, Jr., was born in Salinas, California, 1902. His mother was a former school teacher who instilled in her son a lifelong passion for reading and learning, and his father served as the Monterey County treasure. The family had a place in Salinas' upper crust, but as a youngster, John was allowed to make the forests and fields around town his playground. He spent his summers working on local ranches where he was befriended by and worked alongside groups of migrant workers. This was also his introduction to the darker aspects of human nature and he was taken aback by the way some of his friends were treated. These experiences would shape his later writing, notable Of Mice and Men (1937) and The Grapes of Wrath. 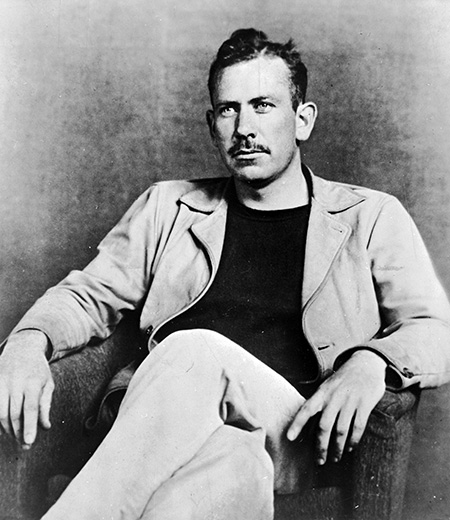 After graduating Salinas High School in 1919, Steinbeck entered the Stanford University where he studied English Literature but he left without a degree in 1924. He traveled to New York to be near the center of the publishing world. He supported himself doing odd jobs but was unable to sell any of his writing so he returned to California. He lived with his new wife in a cottage in Pacific Grove in a cottage owned by his father. When the Great Depression struck, Steinbeck got ahold of a boat and managed to feed his wife and a small community of friends from the fish and crabs he was able to harvest from Monterey Bay. About this time, Steinbeck became friends with Ed Ricketts, owner of Pacific Biological Laboratories. Ricketts became a friend and mentor to the aspiring writer. They often discussed ecology, philosophy, marine biology, and their mutual curiosity over nearly everything. When Steinbeck's writing was troubled, Ricketts knew to calm him with music played on his great phonograph.

Of Mice and Men was about the dreams of two migrant farm workers and the nearly inevitable tragedy of their situation. Steinbeck published a series of articles in a San Francisco newspaper about the conditions faced by refugees from the Midwest "dust bowl" states who sought work on Central Valley farms, and these stories grew into the foundation of The Grapes of Wrath. The film versions of both novels were in production at the same time at different studios, and Steinbeck would spend the day on one set, the next at the other. In 1942, Steinbeck published The Moon is Down, a story about a small village in Northern Europe which unites in resistance of the forces occupying the town. The next year, The New York Herald Tribune sent Steinbeck to Europe as a War Correspondent and he also worked with members of the Office of Strategic Services. He joined Douglas Fairbank Jr.'s Beach Jumpers on several raids in the Mediterranean, and he returned to the US with shrapnel injuries he had difficulty discussing.

Steinbeck wrote the script for Hitchcock's thriller Lifeboat (1944). Although today the film is considered one of Hitchcock's underrated masterpieces, Steinbeck was disappointed with the film for having racial overtones and "slurs against organizes labor" and tried to get his name removed from the credits. He later wrote the screenplay for Viva Zapata! (1952), having been inspired by tales of the revolutionary that he had heard while traveling in Mexico with Ed Ricketts. His last novel, The Winter of Our Discontent (1961) was a disappointment to critics, who were hoping for another The Grape of Wrath. The Nobel committee selected Steinbeck for the 1962 prize for his "realistic and imaginative writing, combining as it does sympathetic humor and keen social perception." The selection was widely panned by critics, and even the committee seemed to realize that Steinbeck's greatest writing was behind him. In 1964, Steinbeck was awarded the Presidential Medal of Freedom by Lyndon B. Johnson.

Newsweek Magazine sent Steinbeck as a correspondent to Vietnam in 1967. The writer felt that the controversial War was a noble adventure and was considered surprisingly hawkish. His two sons were both serving in country, and he managed to visit one of them in the field at a forward firebase. A lifetime smoker, John Steinbeck died in New York City on December 20, 1968, from heart disease and congestive heart failure.