Before she ever had her own radio show, Charlotte Greenwood produced one for a friend in need.

Starting out in 1908 an eighteen-year-old Broadway chorus girl, whose height and elastic limbs pulled her from the operatic career she would have loved toward the broader strokes of vaudeville comedy, Greenwood dreamed of playing straight dramatic roles, the antithesis of her famous slapstick spinster roles and her even more renowned fan kicks. 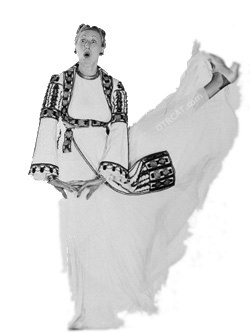 When London's West End came calling in the early 1930's, Greenwood dropped a successful comedy career at Metro-Goldwyn-Mayer, playing opposite Bert Lahr, and Buster Keaton, to perform before the crowned heads of Europe at the Theatre Royal, Drury Lane, earning the plaudits of critics who never wasted good reviews on the less than worthy.

It was while she was performing in London in 1935 that news reached her of the serious illness of Thomas Meighan, her friend and former brother-in-law and a heart-throb of the silent screen.  Greenwood had earlier headed the bill for an NBC program, with Noël Coward and Gertrude Lawrence, broadcast to the U.S. in honor of King George V's silver jubilee.  When she mentioned to Johnny Royal, the NBC executive and old friend in London, that she liked the idea of doing a special broadcast to show the dying Meighan how much he was loved, Royal gave her the green light.  Within a week, Greenwood assembled a galaxy of stars, friends of Meighan's from years before.  Among them were John McCormack, Sir Seymour Hicks, American film star Bessie Love, and former NY mayor Jimmy Walker.  Besides conceiving the show, Greenwood wrote the script as well.  Not only did the broadcast bring happiness to Meighan, on his death-bed in New York City, but the show brought about a reconciliation between Jimmy Walker and President Franklin D. Roosevelt.  After this experience, Greenwood knew the power of radio.

Starting in June 1944, she took on the formidable job of replacing Bob Hope, the perennial Pepsodent spokesman, who due to his wartime USO show tours was unable to keep his contractual commitment to his NBC radio show.  After the first few shows, critic John K. Hutchens of the New York Times gave Greenwood some backhanded compliments. Citing news for "the nostalgia department," Hutchens announced Greenwood's role as Bob Hope's stand-in. "What the Hope public, especially the younger members thereof, think of Miss Greenwood's show it would be interesting to know," he wrote, referring to her "gentle comedy" and describing her comic contribution as "pretty tame" by comparison to Hope's. Hutchens had a point, on two levels, when he describes The Charlotte Greenwood Show as relying on Greenwood's long-time arsenal of comic tricks and quips and on plots that were "little," "mild," "ingratiating."  To begin with, casting the elegant Charlotte Greenwood as a star who has adopted three children in a small town somewhere in the Midwest, the picket fences and front porches of which she yearns for even when she's on the set with the cameras rolling, is stretching the imagination too far even for the fantasy world of radio.

Greenwood had played a make-it-all right "fixer," as she does in her radio show, almost since her first significant roles on stage, and had played somebody's aunt numerous times it's not hard to see her mothering these three orphaned children, who so sweetly call her "Aunt Charlotte" and ask whether she'll ever be in a "real cowboy picture."  But it was too much against her true character that of a city-living, hard-driving, super-disciplined, always smashingly dressed star to pretend that she really wanted to be back home in the village with her adopted kids, leaky pipes and power outages.   Hutchens is right, too, about the tame humor, using as a sample an exchange Greenwood has with a lady friend: "What's that on your head?" "My new chapeau." "I knew it wasn't a hat."  Her mildly barbed exchange with Hopper ("I knew you were here, I saw your broom in the driveway") wouldn't pop a soap bubble.  Only when Greenwood entertains guests like Hedda Hopper or Lionel Barrymore is her wisecracking fire unleashed, and you realize what a pleasure the show could have been without the kids or the small town or the hollow image of Greenwood as really just a homebody at heart.

A publicity photo from this period, probably meant to emphasize the simpler virtues of Aunt Charlotte's life in fictional Lakeview, says it all. As Bobby Larson, the boy actor who played the youngest Barton, hands her a neat little bouquet, Greenwood sits in full movie star costume on a poolside chaise-longue behind her Rodeo Drive house, her beloved Pekingese Winkie at her side and a copy of the trades in her hand.  Whatever the publicists intended, this certainly isn't the Aunt Charlotte who pines for the pines of Lakeview. Yet the show and characterization were, in fact, perfect for her, because she and the show were perfect for their time. What Hutchens couldn't see so early in the show's run was that the motherliness Greenwood projected, the sense that all would be fine when she came home, that beyond glamour and wealth and fame there were small things that really mattered, sleeping in their beds in a tiny town, worked entirely in the show's favor.  Far from just replacing Bob Hope for the summer, The Charlotte Greenwood Show was taken up by Hallmark Cards for a second season. With its constant commercials for the cards that helped Americans best express, as the jingle ran, "your perfect taste, your thoughtfulness," and sugary harp glissandi between scenes, the show proved just the antidote for wartime and post-wartime anxieties.

If the simple things of life were sufficient to seduce a star like Charlotte Greenwood, the show's message seems to say, shouldn't everyone examine his or her life to see what it is that really matters, and cherish it?  Something in all of these qualities clearly impressed the body who decide whose star to place on Hollywood Boulevard, because Greenwood was to receive a star there not for film but, significantly, for radio.  She had earned it, from her broadcast love letter to dying Thomas Meighan in 1935 to the hope and inspiration she gave in 1944-1946 to countless Americans living under, and fighting against, the guns of World War Two.

By Grant Hayter-Menzies (with excerpts from Charlotte Greenwood: The Life and Career of the Comic Star of Vaudeville, Radio and Film) Grant Hayter-Menzies has served as art and music critic for newspapers and magazines in the U.S. and Canada. His first book, a biography of stage and screen comedienne Charlotte Greenwood, based on her unpublished memoirs, was published in May 2007 by McFarland & Company. His biography of Wizard of Oz star, Billie Burke, was published by the same house in spring 2009.

He is currently working on a book about the extraordinary friendship between American diplomatic wife Sarah Pike Conger and the Empress Dowager Cixi, before, during and after the greatest clash of East and West, the 1900 Boxer Uprising.