Choose your CD format
or order disks individually: Add to Cart Add to wishlist
Play a sample episode from March 05, 1945:

Along with Dashiell Hammett and Raymond Chandler, James M. Cain was a writer of hard-boiled crime fiction, though unlike the others, he didn't write detective stories. James M. Cain told his dark stories in spare, clipped prose.

Cain was interested in primal drives, in lust, greed, and violence. His characters committed crimes rather than trying to solve them. And he was never comfortable with the oft-used "hard-boiled" tag. Mid-career, he told an interviewer, "plugging me as one of the tough young men merely muddles things up."

But tough, his stories were. In his famous novels The Postman Always Rings Twice, Double Indemnity, and The Embezzler, Cain spun unflinching tales of men who fell for seductresses and found themselves pulled into a web of crime. James M. Cain once said, "our national curse..is the 'sympathetic character.'

Double Indemnity, Cain's well-known novella, started out as a serial in Liberty Magazine, and went on to be adapted into a successful film. It is a unique and shocking tale of murder and deceit, with the crooked insurance agent Walter Huff getting mixed up with the uber-evil Phyllis Nordlinger. 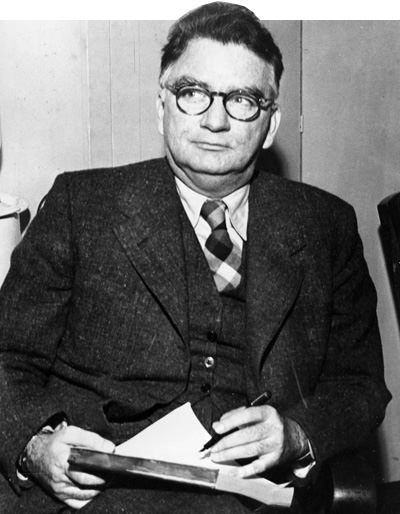 Mildred Pierce is a dark, sprawling work with two very strong women at its core: the title character and her irrepressible daughter Veda. It came out in 1941 and was adapted into a 1945 picture starring Joan Crawford. Lux Radio Theater brought Mildred Pierce to life in 1954 starring Claire Trevor and Zachary Scott.

The James M. Cain collection includes those gems, plus other Cain pot-boilers Wife, Husband and Friend, Algiers, and Love's Lovely Counterfeit. Any fan of mid-century noir will love these well-produced radio works.