Bradbury's popularity skyrocketed in 1950 when he wrote The Martian Chronicles. Enjoy this collection of vintage Bradbury Stories adapted for radio!

Choose your CD format
or order disks individually: Add to Cart Add to wishlist
Play a sample episode from May 08, 1955:

"Ray Bradburys Mars Is Heaven from X Minus One" Ray came a long way from his childhood dreams of becoming a magician in Waukegan, Illinois (the town which as an inspiration for his stories, referred to as "Greentown, Illinois – the safe, home space in many of his writings). After writing his first stories on butcher paper, moving to Hollywood, and star-spotting as a teenager on rollerskates, Ray made his first dough as a writer for selling a joke to his new friend, George Burns. Then he hit the science fiction magazines with his short stories, beginning with "Hollerbochen's Dilemma, which appeared in Imagination in 1938. He even began his own magazine a year later, Futuria Fantasia, which mostly contained his own writing. It lasted four issues. Then, in 1941, the money started tinkling in with his first paying short story, "Pendulum, in Super Science Stories. 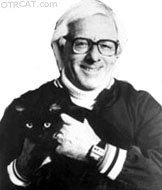 He improved his writing style and found his voice with his 1942 short story, "The Lake." After launching into full-time writing, he married and began his family. His popularity skyrocketed years later, in 1950, when he wrote The Martian Chronicles. Through his life, Ray Bradbury was a very accomplished writer. Amongst his science fiction stories, he also accomplished two musicals, produced some of his own novels, won numerous literary awards, had many of his works made into successful movies, designed a spaceship ride for Disney, and helped engineer rapid transit systems.

This collection includes many short stories and novels that have been made into old time radio shows, some of which he wrote specifically for the programs. His stories appeared numerous times on such classic shows as CBS Radio Workshop, Escape, Suspense, Dimension X, and X Minus One.