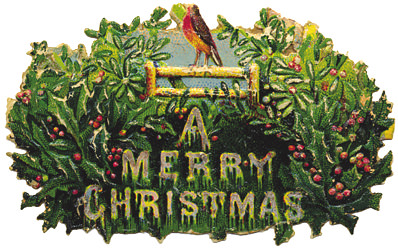 Happy Holidays from OTRCAT.com!  Holiday Time is the most wonderful time of the year and old time radio shows help listeners celebrate with music, laughter, and even suspense!

Each Radio show celebrated Christmas with their special twist.  One of the most memorable productions was Orson Welles Campbell's Playhouse version of "A Christmas Carol" starring Lionel Barrymore.  On Lux Radio Theater, Jimmy Stewart and Donna Reed reprised their roles in a reproduction of "It's a Wonderful Life."

Mystery and detective shows also got into the Christmas Spirit.   Dragnet also had a special Christmas program with a moral at the ending called "A Rifle for Christmas."  In Suspense, a child and nanny are left alone wondering if the parents will return home for Christmas after news of a plane crash.

In the comedy realm, Jack Benny Christmas shows usually revolved around penny-pinching Jack trying to avoid spending money.  Gracie Allen is up to her old tricks as she tries to get George to guess what she wants for Christmas.

Please enjoy these Holiday-themed old time radio shows free to download from the Christmas Collection.  Read about each episode and listen to these special holiday shows! 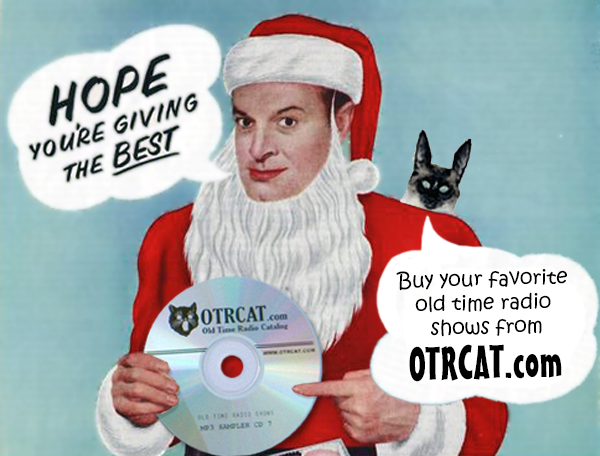 "Paddy O Cinnamon" from mid-1930s
The Cinnamon Bear is Christmas classic radio at its best. The fifteen-minute episodes were first broadcast from the end of November right up 'till Christmas, and can still be enjoyed that way by the entire family. This episode is the first of The Cinnamon Bear series. The story begins with twins Jimmy and Judy (Barbara Wong) writing a letter to Santa Claus. Their mother asks for help trimming the Christmas tree, but uh-oh the Silver Star is missing and the twins look in the attic for the missing star. In the attic they meet a special Irish teddy bear with a green ribbon around his neck…

"It's A Wonderful Life " from March 10, 1947
Jimmy Stewart and Donna Reed reprised their roles on Lux Radio from the film "It's A Wonderful Life." Victor Moore stars as Clarence the angel. The story follows George Bailey as he considers ending his life. Clarence shows George that not only would he be missed in the world but It's a Wonderful Life. This is truly an inspiring story and a popular holiday favorite.

"Trimming a Tree" from Dec 24, 1944
Mary comes over to help Jack trim his Christmas Tree. When she plug in the lights, Jack gets a shock and he tries his hand at being a electrician by wrapping the cord with "enough tape." Meanwhile a police office stops by to talk to Jack Benny about disturbing the peace at the department store. Jack almost gets arrested for loosing his cool with an old man that kept asking him "What should I buy my wife for Christmas?" and for breathing on someone's Christmas carnation.

"Leroy Wants a Motor Scooter " from Dec 18, 1946
Geee-heee—ho-ho-ho! Leroy finds a cat outside and wants to keep it. Uncle Mort refuses saying "I wouldn't mind kittens if they didn't grow up to be cats." Santa's going to have a hard time paying for gifts this year, good thing Leroy only wants one thing, just one thing "a motor scooter!" Perfect Marjorie says, "I don't care what I get Unckie, anything you decide I'll be grateful for." 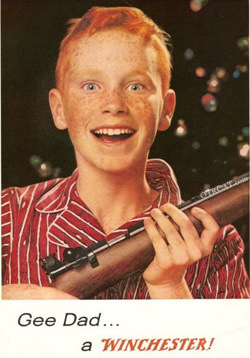 "Twenty-Two Rifle for Christmas" from December 21, 1950
"You're a Detective Sergeant. You're assigned to homicide detail. A small boy is reported missing from his home. His age? Nine years. Foul play is suspected. Your job…find him." Joe Friday and his partner Ben Romero work to solve one of the most heartbreaking cases in Dragnet's history. It's a Christmas chronicle, Dragnet-style, and there's a bonus moral twist at the end for all parents wanting to buy their kids a gun for Christmas. Christmas favorite Bing Crosby sings opens with "Adeste Fideles" first in latin and then "Oh Come All Ye Faithful" with the Kraft Choral Club, which was Bing's opening Christmas standard every year. The Kraft Choral Club is 70 co-workers of the Kraft offices and factory in Chicago. In 1944, we were in WWII and in the audience there is 100 young ladies from the Navy W.A.V.E.S. and we are reminded that Kraft Cheese only takes two ration points.

Songs include:
Bing Crosby Adeste Fideles/Oh Come All Ye Faithful
Bing Crosby Jingle Bells
Eugenie Baird sings I Dream of You
Bing Crosby I Can Make Believe
The Charioteers sing a very fun A Slip of the Lip Might Sink a Ship (WWII Propaganda song "Don't Talk to Much, Don't Know too much…")
Bing Crosby What A Difference a Day Makes
Kraft Choral Club A Beautiful Savior
Kraft Choral Club God is Ever Beside Me
Bing Crosby Silent Night

"Gracie's Last Minute Christmas Gift" from December 18, 1947
Gracie is up to her old tricks again and she won't tell George what she wants from Christmas. She writes out a list of clues to get George to guess what she wants but he's clueless. George is forced to pay Gracie a 50 cents for each wrong guess that he makes, eventually he sends Gracie to the psychiatrist. Hans Conried and Gale Gordon also star in this episode.

"Uninhabited" from December 22, 1937
A memorable post-World War I tale: a French, Australian, and African-American soldier find themselves travelling on a train on Christmas Eve 1918.

"Markheim" from 1945
A tale of Chrismas murder: the nephew of a wealthy uncle follows his inner voices to commit murder in attempt to cover the trail his reckless investments.

The epic compilation of Christmas Cheer: 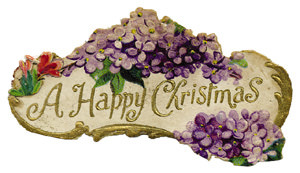 Spoiler : Thanks for the great selection of Christmas downloads. Something for everybody i am sure. Thanks also for the great choice and fine service througHOUT THE YEAR>

Reply
Spoiler : I would like to let you know the MP3 CDs I have got for my friends as Christmas gift is big surprise for them, and they like the CDs very much.

Reply
Spoiler : I am enjoying the complete CBS Radio Mystery Theater cd\\'s I ordered a few months back (about Christmastime). One episode per evening will take me about eight years to complete (Joy oh Joy). As for future ordering plans, I am getting set to order the complete Great Gildersleeve set from you (minus episodes 1-7 which I\\'ve already received). Thanks for the recent postcard. Give me a month or two (or three). I am saving my allowance money (LOL). Also, working on my wife to allow the purchase.

Reply
Spoiler : I AM LOOKING FOR THE SCRIPT OF JACK CORMAN'S TALE "THE PLOT TO OVERTHROW CHRISTMAS" IT IS HYSTERICALLY FUNNY WHEN DONE WITH AMATEUR ACTORS REPRISING OLD RADIO SHOWS AT AN INDEPENDENT SENIOR LIVING COMUNITY IN 2015. WE WERE KNOWN AS 'RADIO READER'S THEATER' and read them live to an audience. MOST OF OUR BETTER MALE ACTORS passed on but are still remembered. I MUST ADD we performed "SORRY, WRONG NUMBER" and our resident outperformed AGNES MOOREHEAD. EVERYONE IN THE WHOLE ROOM WAS GASPING AND CRYING.

Reply
Spoiler : The best to you and your family this wonderful time of the year. Thank you for all the joys of listening to Old Time Radio.

Reply
Spoiler : Thank you kindly. Enjoy the holiday season. You give us enjoyment through out the year.

Reply
Spoiler : You are, without a doubt, my favorite site! Merry Christmas to everyone at OTR.

Reply
Spoiler : I am overwhelmed at your site. I would like to have your complete Christmas Collection to start with. mp3 format is acceptable and downloading is also acceptable

Reply
Spoiler : Had trouble submitting an order initially. Got it to work with Firefox and received my order. Working great! Glad I stuck with it.

Reply
Spoiler : I don't know where in the world you got all those pictures,WOW!!!,I really enjoyed looking at all of them,Your the one no one else would have took the time to have put it all together,Thanks Again"!!!

Reply
Spoiler : I am looking for a recording from around 1958 called Nativity... my mother used to listen to it every year with us children. I thought it was Gregory Peck who narrated, but it is not. The production had eerie angel music in the background...I would love to share this with my family. Please HELP!

Reply
Spoiler : Not realy a comment but a question. I've been looking for a skit I used to have on cassette but I can't remember the name of the skit or the album. It was a couple getting ready for Christmas in the first half and the second half they were getting ready for new year's eve. They were hurrying to get the champagne ready for their new years kiss. My wife loved that skit and I've been trying to find it. Looking for any help I can get. Thanks.