Jump Jump and the Ice Queen

Enjoy this Christmas Serial done in the Spirit of The Cinnamon Bear and Jonathon Thomas and His Christmas on the Moon.

Choose your CD format
or order disks individually: Add to Cart Add to wishlist
Play a sample episode from November 22, 1948:

It seems that every year there rise nefarious forces that are determined to stop Christmas from coming. The Grinch and Ebenezar Scrooge were not the first, and definitely not the last to try and get in Santa Claus's way. Some how Santa Claus and the true spirit of Christmas always manage to come through, even in these days when kids are holding out for the latest version of the Grand Theft Auto video game.

In 1947 the threat to Christmas came from the evil Ice Queen who has kidnapped Santa's reindeer. 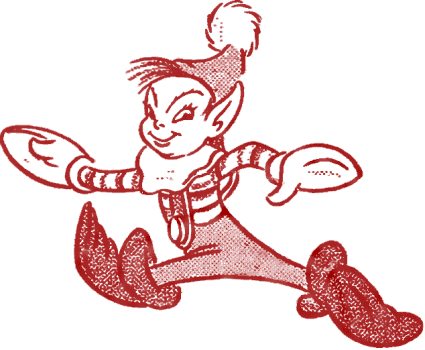 Jump Jump and the Ice Queen was a 24 part syndication planned to be played daily through the days leading up to Christmas. The serial was very similar to The Cinnamon Bear and Jonathon Thomas and his Christmas On The Moon from the previous decade.

Jump Jump is a mischievous elf who is only "no feet three inches tall". He was created by married couple Mary McConnell and Harry Hickox, who wrote and performed Jump Jump of Holiday House for New York radio syndicator Harry S. Goodman. In each episode the elf is told a fairy-tale by Mary Holiday, the mistress of Holiday House, where everyday is a Holiday. Jump Jump's voice is performed by an actor recorded at 33 1/3 rpm and played back at 78, which gives the elf a hard to understand speech, unless the actor speaks slowly and deliberately. (This reminds us of The Chipmunks, but less irritating.)

In the later serial, our hero Tim lives in an orphanage, where his friends worry that Santa will forget them. Tim leaves on a quest to the North Pole to get the answer from Santa himself. On his journey he meets Jump Jump, who takes him to Holiday House to meet Mary Holiday. Mary is worried because she hasn't heard anything from Santa either. She joins the quest, along with the clown Achi Paggli whose hair changes color to match his mood, a lazy lion named Sleepy Slim who naps more than he is awake, and the Poet who is forever rhyming. Eventually they reach the North Pole and learn from Santa Claus about the Ice Queen and her reindeer theft. The crew take it upo them selves to save the reindeer, if only they can get through the circle of blue fire surrounding her palace.

Entrepreneur Samson R. Diamond hit upon the idea of a merchandising tie in with the Jump Jump shows, and sold hand made dolls created by the fledgling Mattel Toy Company of Culver, CA. The dolls were packaged in boxes that were cardboard replicas of the Holiday House.

The shows were all written by McConnell and Hickox, who also performed all of the characters except for Tim and Jump Jump, who were played by young Johnny McGovern. Jump Jump's lines were prerecorded and replayed at higher speed. An important part of the production was the Hammond Organ played by KFI station organist Bob Mitchell. Mitchell had been an accompanist in silent movie houses at the age of 12 in Pasadena. He played in silent movie revival theaters from 1992 until his death in 2009.

Comparisons between Jump Jump and the Cinnamon Bear are probably inevitable, but the two are very different programs. Cinnamon Bear was a very complex production with an all-star radio cast and a full orchestra. Although produced a decade later, Jump Jump and the Ice Queen is a much smaller and more intimate production. Both are delightful, and should warm the hearts of young and old who take the time to enjoy them through the holiday rush.

See also: Cinnamon Bear and Jonathan Thomas and His Christmas on the Moon