Since its inception, radio has played an integral roll in the history of America's popular entertainment....

Beginning with Vaudeville, transitioning into radio, then television, and today available on the Internet, the democratization of entertainment has long been a part of the history of America's popular culture. While it is true that popular entertainment and music exists around the world, it is in America that the advent of syndicated radio that shows and music became available to the masses. During the golden era of old time radio, as you sat by your radio in New York, your cousin in Michigan and your Grandmother in California could all be laughing and listening to the antics of Vic and Sade, Amos and Andy, or Burns and Allen in the same day. It is with radio that all of America could share entertainment experience. The power of radio has proved to be important to the social and cultural history of America, in particular its development and rapid growth of the 20 th century. Though radio history exists in all countries, this history will focus specifically on the history of radio in America.

Benjamin Franklin's discovery
of electricity helped lead
to invention of the radio.When researching the invention of radio, you will encounter different "factions each believing that a particular person or group of people invented radio. The history of the invention of radio is just as fascinating as it is controversial. In short, there is not one person or invention that created radio, as we know it today, but there are several important historical milestones that lead to its development. The technology of radio was first and foremost considered to be a mode of communication between two or more people in different locations. To go deep into history some may argue that the need to invent communication over distance with the use of drums, flames, and other signals beget the beginning of radio communication (Settel pg. 13). Others would contend that Benjamin Franklin first discovered a more specific understanding of the potentials of radio. During that famous thunderstorm in 1752 with kite and key in hand he differentiated positive and negative charges and considered using electricity for communication (Sellel 16).

Technology's First Uses: A Transition from Cable to Wireless Communication

Guglielmo Marconi (above)
is widely accredited with
inventing wireless communication,
but actually the first
wireless message was
secretly sent to a Russian Navy
ship in 1895 by
Aleksander Poppov (below) . 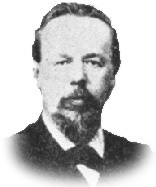 Many inventions and technological attempts combining electricity and communication lead other pioneers to the invention of radio. In 1857, attempts to make a transatlantic cable (over 2,500 nautical miles) between New York and London failed repeatedly. The idea was eventually abandoned after it was realized that cables would not survive floating in water across the Atlantic. Though a bit ambitious and premature, this attempt ushered the necessity of transatlantic communication without the use of cables. During this time, radio signals transmitted via the vast network of telephone lines were mainly for military purposes. Cables were used domestically for communication until Alexandra Graham Bell transmitted voice over an electromagnetic signal in 1876. 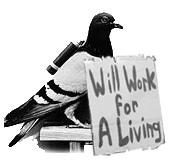 Wireless technology would not be successfully transmitted until 1895 in Russia, when Aleksander Poppov secretly sent a message to a Russian Navy ship out at sea. However, the technology was kept hidden by the Russian government and Poppov was not given credit worldwide until recently. As a result, Guglielmo Marconi is widely accredited with inventing wireless communication allowing for the first transatlantic messages to be sent in February 1902.

These technologies used the first standardized language of electrical communication between two or more people with the Morse telegraph invented in 1835.Most radio signals used the Morse Code and it continues to be used to this day. In 1910, the US government required Marconi Morse Code Transmitter on all ships both civilian and military. This prompted the US Navy to adapt the Marconi wireless communication in World War I and subsequently scaled down their thriving homing pigeon program (Settel, 28).

Radios for the Masses 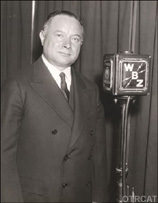 David Sarnoff (above),
a national hero, suggested
the radio's use a "radio music box"...

Wax Cylinders (player above)
were delicate and could only
be played a limited number of times.

The civilian use of Marconi radio transmitters saved the lives of 800 people on sinking Titanic in 1912. The land transmitter during the Titanic rescue was David Sarnoff who became a national hero for his dedication and service. This attention caught the eyes of the executives at the Marconi Wireless Communications Company and he was hired to work for the budding company. It was Sarnoff's suggestion in 1916 to use the radio as a "radio music box to be a "household utility (Settel pg. 32). This idea was put on hold until after the First World War. Slowing the process further, the US feared that wireless telegraphy would fall into foreign hands and forced Italian-American inventor, Marconi to sell his technology to the American company RCA.

Eventually David Sarnoff realized his dream when he introduced radios for home entertainment for the masses in 1922 with the Radiola console (Malton, 2). Sales boomed into the millions within a few years and radio shows followed proving to be a popular entertainment revolution.

The concept of radio as an entertainment medium was popularized in the 1920's when the technological, economic, and popular entertainment advances of the era proved fertile for the development of radio shows. The Gilded Age and booming economy allowed a growing middle class, which led to the pervasive acquisition of radio sets in American homes using EZ credit. The radio set was readily available, but like watching television today, America was saying "nothing was on air. Vaudeville skits and musical groups made a natural transition to radio; however skits became too repetitious and good actors expensive after one airing.

Quality programming was scarce, consequently to promote radio sales, Westinghouse Electric and Manufacturing Company established KDKA under the guidance of Dr. Frank Conrad (Settel, 35). Vaudeville Skits and musical numbers had long been recorded on Wax Cylinders, but KDKA was the first station to mix the shows for syndication. Wax Cylinders were delicate and could only be played a limited number of times. This problem led to the use of shellac and later vinyl Phonograph records. Phonograph records had been invented earlier in 1888 by German Emile Berliner but not used regularly in America until the 1920s. The two devices competed in the same market (like MP3 disks, Compact Disks, Cassette Tapes, 8-Track Tapes, Open Reels, etc.) rendering Wax Cylinders obsolete. The cylinders were no longer made after 1929 and are now quite rare (see also Ada Jones recordings).

Dr. Frank Conrad adapated to the new phonographs and coined the term "broadcast." He became America's first homegrown disk jockey, flipping recorded music and produced a regular schedule of his phonograph music collection. Stations rushed to join the commercial radio bandwagon (Malton, 6). As the number of Radio Stations grew the demand also grew for quality radio programming as well as shows to fill the time slots. A complex system of writers, directors, actors and others was developed to produce quality radio shows quickly. Realizing the potential of radio's mass draw, the makers of commercial goods sponsored shows to promote their products.

Then Presidential Candidates,
James Cox (above) and
Warren Harding (below),
were both heard on live radio.

Politicians also understood the growing significance of radio to generate votes early in the twentieth. The 1920 election outcome between James Cox and Warren Harding (both newspaper editors) was heard on live on radio. Afterwards, the media savvy President Warren Harding supported the technology of radio and used it to give important addresses to the nation. Presidential "Fireside Chats were popularized by Franklin D. Roosevelt and the tradition is continued to this day.

Following Harding's use of the radio, many important political and newsworthy events were captured on air. The Republican and Democratic Conventions in 1924 brought the campaigns of the Democratic Challenger John W. Davis of West Virginia and Republican Incumbent Calvin Coolidge into the living rooms of Americans. Americans heard the speeches and actions of the conventions. People from all over shared the experience not through hearsay from a newspaper story, but with the events as they unfolded. America was hooked on radio.

The early days of radio set the precedent for the upcoming Golden Years of Radio, as it is unanimously known. Radio's development came from many sources and inventions throughout the history of human history. In its beginning, radio technology was used for communication and military reasons. Eventually it developed for all people with an entertainment and information focus. Unfortunately few broadcasts prior to the 1930's were recorded and even fewer have survived.

Spoiler : I can safely say that I have ordered hundreds of dollar of OTR from OTRCAT.com and I have to tell you that more than once, to be more precise, the last three times, I have come to otrcat to get more and I am inundated with "collections" I understand that you are trying to resell your merchandise in different ways, which is fine, but for example, I I have all the episode of Gunsmoke, Escape, Suspense, ..... I really have no interest in buying Bill Contrad's best!!! It is way too hard for me to negotiate through all this. (I have been bit by this before by buying a lot of episodes of some collection before completely researching what it was I was I was buying). so I have decided to put it off because it is too much work. Bottom line, I never get back to it. Would it be possible to have a page of JUST seriies. ie Gunsmoke, Escape, Suspense, etc instead of trying to repackage the same content different ways. I have been an advocate of OTRCAT and now have my daughter involved in a serious way, but I am getting frustrated with the marketing. I am including my address so that you know that I have been an avid subsriber to OTRCAT, but now, I am afraid that it has fallen over the marketing cliff I refuse to follow. OTR to me should not be another work I have to deal with. I have enough of that.